China ready to intervene in USD/CNH; Tells banks to prepare

Last week, the Bank of Japan intervened in the foreign exchange markets by purchasing $21 billion to $25 billion worth of Yen, a record amount for Yen intervention.  USD/JPY sold off more than 500 pips from 145.90, however recovered most of that within days.  The pair has been testing the 145.00 level for the last 4 days.  Other JPY pairs acted similarly.  Yesterday, the Bank of England intervened in the bond market and said it will buy 65 billion Pounds worth of long-dated Gilts in order to prop up the bond market and lower yields, as speculation swirled that large pension funds would soon fold if they were not saved.  On the day, GBP/USD closed up 155 pips on the day, and bonds and the FTSE 100 moved higher.

The question traders are now asking is: “Which central bank will be the next to intervene in the markets?”  We may have found out the answer today as the PBOC told state banks to “stock up” for Yuan intervention offshore in a bid to defend the Yuan.  The onshore China currency, USD/CNY, is already controlled by the Chinese government and trades with a 2% range of the reference rate.  However, the value of the offshore Yuan, USD/CNH, is determined by the markets.  If the PBOC is serious about intervention to increase the value of the Yuan, it would intervene in the USD/CNH.

On a daily timeframe, yesterday the USD/CNH took out the pandemic highs at 7.1987.  The pair traded to 7.2672, its highest level since 2007, and quickly reversed.  This set up a one-day reversal candlestick pattern, known as a shooting star formation.  Today, markets are following through after the shooting star and trading lower (it also helped that the PBOC has threatened to intervene!).  Also note that on Wednesday, price reached the target of the long-term pennant formation, which began in April. 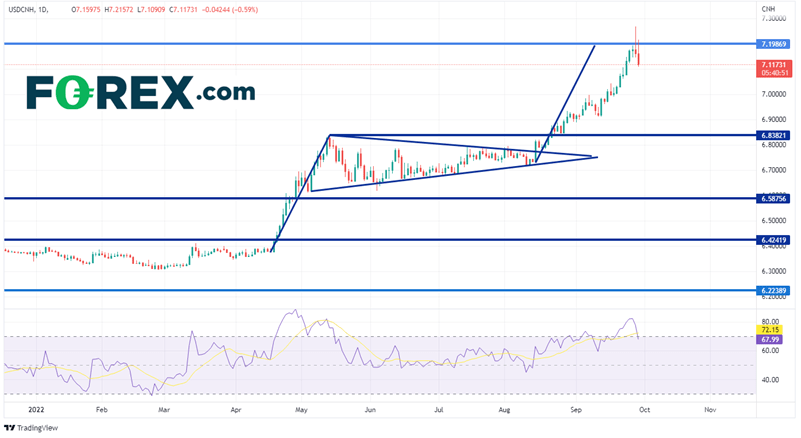 On a 240-minute timeframe, USD/CNH had been moving higher in an orderly, upward sloping channel since September 12th.  Yesterday, price broke above the top trendline of the channel and failed.  As often is the case, when price fails to break out of one side of a pattern, it often moves to test the opposite side.  That is indeed what happened, and price broke the bottom of the channel today.  First horizontal support is near today’s low at 7.1059.  Below there, price can move to the 38.2% Fibonacci retracement level from the lows of August 10th to the highs of September 28th at 7.0567 and then additional horizontal support near 7.0435.  However, if the current selloff reverses, the first resistance is at yesterday’s low of 7.1443 then the bottom trendline of the channel at 7.1734.  Above there, USD/CNH can move to the top trendline of the channel near 7.2520. 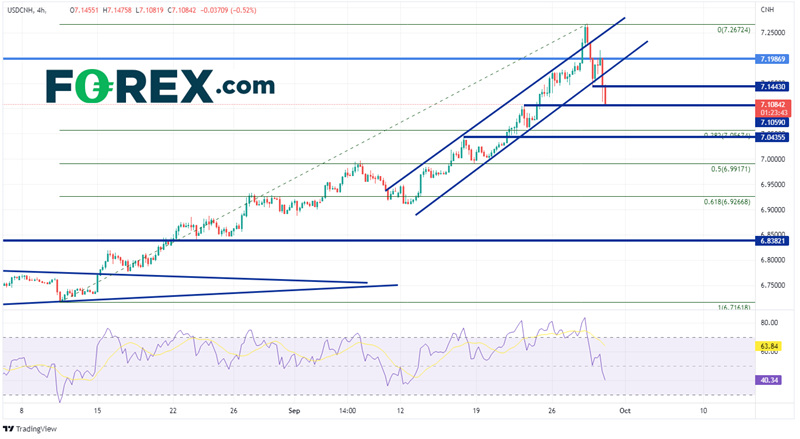 After the BOJ and the BOE intervened in the markets, traders are asking “Who’s next?”.  The PBOC threw its name into the ring today by telling state banks to be ready to defend the Yuan.  As a result, USD/CNH has been moving lower today.  Keep an eye on the pair as volatility could pick up on any headlines from the PBOC.