Could a 50-bps Fed hike (inadvertently) weigh on sentiment? AUD/JPY

By :
Matt Simpson
,  Market Analyst
It’s been a turbulent few days for risk assets since US inflation data hit new highs. And the excitement (or fear) only intensified with a 75-bps hike now on the cards. But there are signs that Wall Street has already accepted this fate, given yesterday’s downside volatility was notably less severe. And as money markets have now priced in ~90% chance of a 75-bps hike today, it could lead to a more volatile outcome if they ‘only’ hike by 50-bps points today. 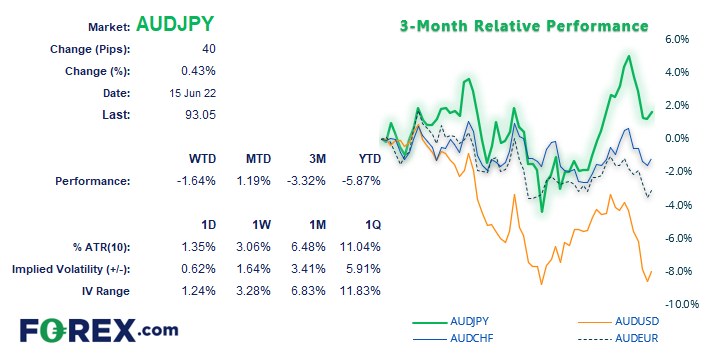 Ultimately the Fed have accepted they’re further behind the curve than they thought. So we’re now at the phase where the Fed ramp up their attack on inflation and cross their fingers that supply-side inflation somehow pulls back from nerve-wracking levels. But I suspect their reference to ‘soft landing’ could go out of fashion as quickly as their term ‘transitory’, as inflation will likely remain sticky and we’re yet to see any signs of a top. But this will take time to play out.

As for today, a bullish outcome for risk-appetite is the well-telegraphed 75-bps hike, conviction from the Fed that they’ll manage a soft landing, alongside a downwardly revised CPI forecast for good measure. A 50-bps hike today could inadvertently weigh on sentiment as markets are concerned the Fed aren’t taking inflation seriously enough.

We’re keeping an eye on AUD/JPY for potential longs should sentiment rebound. It is a classic barometer of risk and is likely to rally if Wall Street can somehow scoop itself from its lows. And a risk-on rally for equities would also be bearish for the yen.

Moreover, RBA Governor Philip Lowe appeared in a rare television interview, where he effectively upped the RBA’s CPI forecast from 5.9% to 7% and said it is “reasonable to expect a 2.5% cash rate at some point”, adding how quickly they get there is down to events. My take is that it effectively confirms a series of 50-bps hikes, and even more so now the Fed are likely to up their own game. 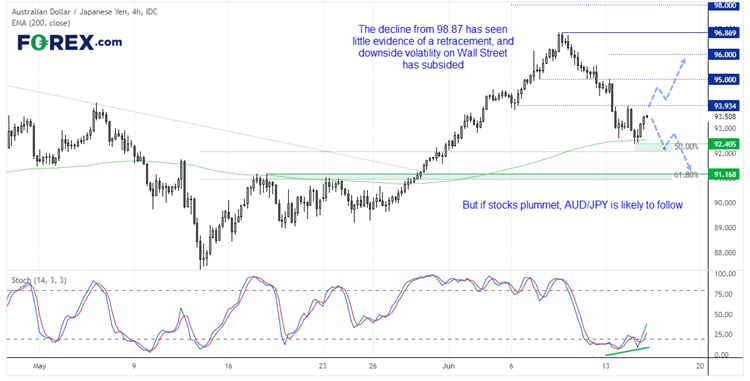 The fall from 96.87 has effectively been in a straight line, which itself is a good enough reason to expect some mean reversion. Support was found yesterday at the 200-bar eMA on the 4-hour chart (and close above the 20-day eMA). Furthermore, the stochastic oscillator produced a bullish divergence within the oversold zone and moved back above 30 to confirm the small rally from the 200-dar eMA.

Our bias remains bullish above the 92.40 low, and a break above 94.0 assumes bullish continuation. If equities tumble it is also likely AUD/JPY will be dragged down with them. Therefore, a break below 92.0 assumes its next lower has begun.