Crude off lows as traders sharpen focus on US oil stocks

Crude oil prices have managed to recover slightly after falling by as much as 2.5 per cent earlier, though both contracts were still down by around 1 per cent at the time of this writing. After gapping lower on Monday in response to the failure of an agreement between large oil exporters about a production freeze, oil prices have surprisingly surged higher. As well as short-covering, one of the biggest drivers behind the kick-back rally had been the oil strike in Kuwait which disrupted production for three days, cutting crude output by as much as 1.7 million barrels per day. But Kuwait Petroleum has announced that the strike is now over and that it would boost output to 3 million b/d within three days. On top of this, prices were pressurised overnight by American Petroleum Institute (API) data showing US crude oil stocks rose by 3.1 million barrels last week. This was more than the 2.2 million barrel increase that the official data from the US Department of Energy is expected to show this afternoon. If the actual numbers show an even larger build then oil prices may come under renewed pressure. Alternatively, a surprise drawdown could see prices turn positive, even. But as the weather improves in the Northern hemisphere, demand for gasoline should start to rise slowly. As such, traders should monitor the weekly changes in US gasoline stocks closely going forward. If, as one would expect to see at this time of the year, they show consistent falls then this would suggest that demand is indeed strong for this crude product. Consequently it should lend support to oil prices.

Once the dust settles post the oil inventories data this afternoon, it will be interesting to see which direction prices will head towards. The recent developments all suggest that oil prices ‘should’ be heading lower. However the lack of a significant drop this far in the week bodes ill for the bears who were waiting for Brent to crash below $40 and WTI $38 after "freeze" talks collapsed on Sunday. If such a development fails to dent prices much and the market is able to absorb it then it says a lot about the market’s strength.

But for now, both contracts are trading in no man’s land so things could change dramatically over the coming days depending on the direction they eventually break.  As we highlighted the possibility on Monday, Brent oil has more than ‘filled’ the weekend gap when the OPEC and Russia failed to agree on an output freeze deal. Brent subsequently rallied above prior support and resistance level of $42.45/50 area on a daily closing basis. This sort of price action suggests that the buyers have remained in control, and a test of the $44.90-$45.25 resistance range still remains a likely outcome. That being said, Brent has pulled back relatively sharply after nearly climbing to this region yesterday and is now trading back around its 200-day moving average circa $43.15. If it now moves back below that pivotal $42.45/50 level then a drop towards prior support and the bullish trend of the rising channel around the $40 area would become likely. Still, while it holds within this bullish channel, the technical outlook on Brent remains positive.

WTI meanwhile has eased off from the top of its range around the $42.00-$42.40 area. But like Brent, it is still above its 200-day moving average and inside a bullish channel. The faster moving averages such as the 50-day SMA and 21-day EMA are both pointing higher, confirming that the trend at the moment is still bullish. But given the recent fundamental developments, a break above the $42.00-$42.40 area is now needed in order to give the bullish sentiment a boost. However if short-term support around the $41.30-50 area breaks then a revisit of the 200-day moving average or the support trend of the bullish channel would become likely. 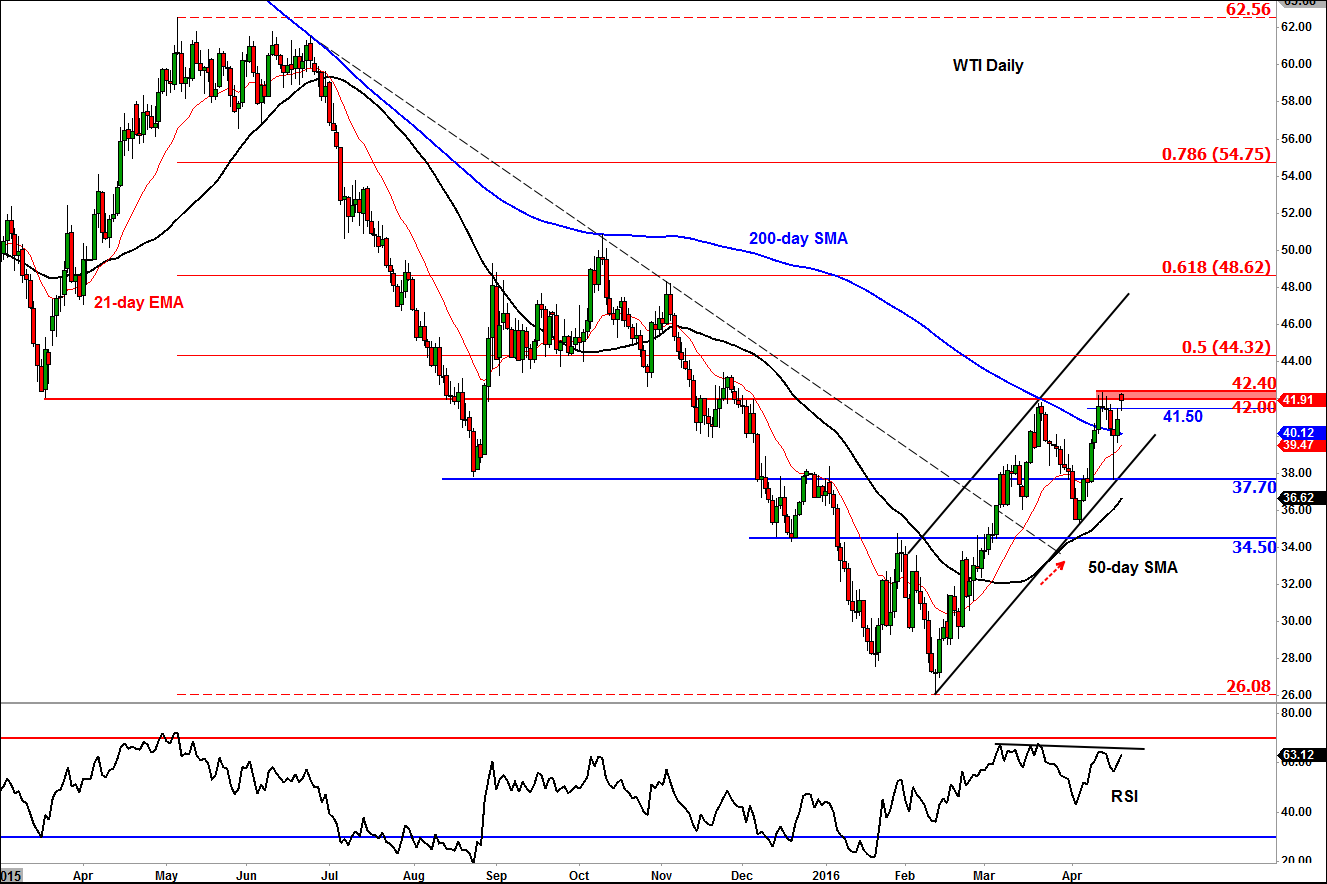