Global equities have fallen for a second day today, hurt by weakness in banks and commodity stocks. At the time of this writing, the major European indices were off between 1.5 to 3.0 per cent, and US index futures pointed to a weak start on Wall Street later. Sentiment is downbeat mainly because of renewed selling pressure in oil, as well as on-going concerns about the global economy and the possibility that Britain may leave the EU. The positive impact of QE and central banks’ desire to hold interest rates at these historically low levels have also been diminishing on stocks, mainly because these policies have so far failed to underpin economic growth in a meaningful way. The persistently low levels of interest rates have undoubtedly been harmful for banks, which is why they have been underperforming. For the wider stock markets, things could get really ugly now if oil prices continue to fall, after the latest rally faltered yesterday on the back of fresh comments from oil ministers of Iran and Saudi Arabia.

Just a week ago, hopes were raised for a more significant crude price recovery after Saudi Arabia, Russia, Qatar and Venezuela proposed an oil output freeze at January’s levels. The agreement was contingent on other large producers participating, including Iran and Iraq. Both countries have recently welcomed the deal but have not said if they would also participate. In fact, the Iranian oil minister yesterday said that the production freeze idea is "ridiculous," apparently ruling his country Iran out of a potential deal. Nevertheless, Saudi Arabia’s oil minister, Ali bin Ibrahim Al-Naimi, is still hopeful a deal will be reached, saying some OPEC and non-OPEC producers will hopefully meet in March to negotiate an output freeze – it remains to be seen how they will agree on anything with Iran rightly not willing to freeze its output. Al-Naimi has reiterated that production cuts will not happen, but added that freezing "is the beginning of a process, and that means if we can get all the major producers to agree not to add additional balance, then this high inventory we have now will probably decline in due time."

If the oil price decline continues, which appears likely now, then stocks could fall further. Unless the black stuff bounces back now or a central bank intervenes, it is difficult to see where the markets will find significant support from. This afternoon’s official US oil stockpiles report from the Energy Information Administration will therefore garner significant attention. Last night the American Petroleum Institute, an industry group, reported a surprisingly large build in oil inventories.  If confirmed, this would be bad news for oil, and by extension equities. But the potential is therefore for a positive surprise, too. So leading up to the EIA report, we may see some short-covering in both oil and stocks.

From a technical perspective, the German DAX index has moved back below the previously support area of 9250-9325, which is a bearish outcome in the short-term – especially if it holds below here on a closing basis. The lack of a more significant recovery suggests further sharp drops are now likely. The immediate bearish target to watch now is around 9035, which marks the 61.8% Fibonacci retracement of the most recent bounce from 8695 (which by the way was just below the 127.2% extension level of the larger correction from point B to C, suggesting profit-taking was the reason for that bounce). If and when the 8690 low breaks down then the sellers may aim for the 2014 low at 8350 next, as well as the Fibonacci extensions around that level, as per the chart.

For the bulls, a potential closing break back above the 9250-9325 resistance area would be a positive development. The sooner this happens, the better it will be. For now however, things are looking pretty bearish across the board for the stock markets. 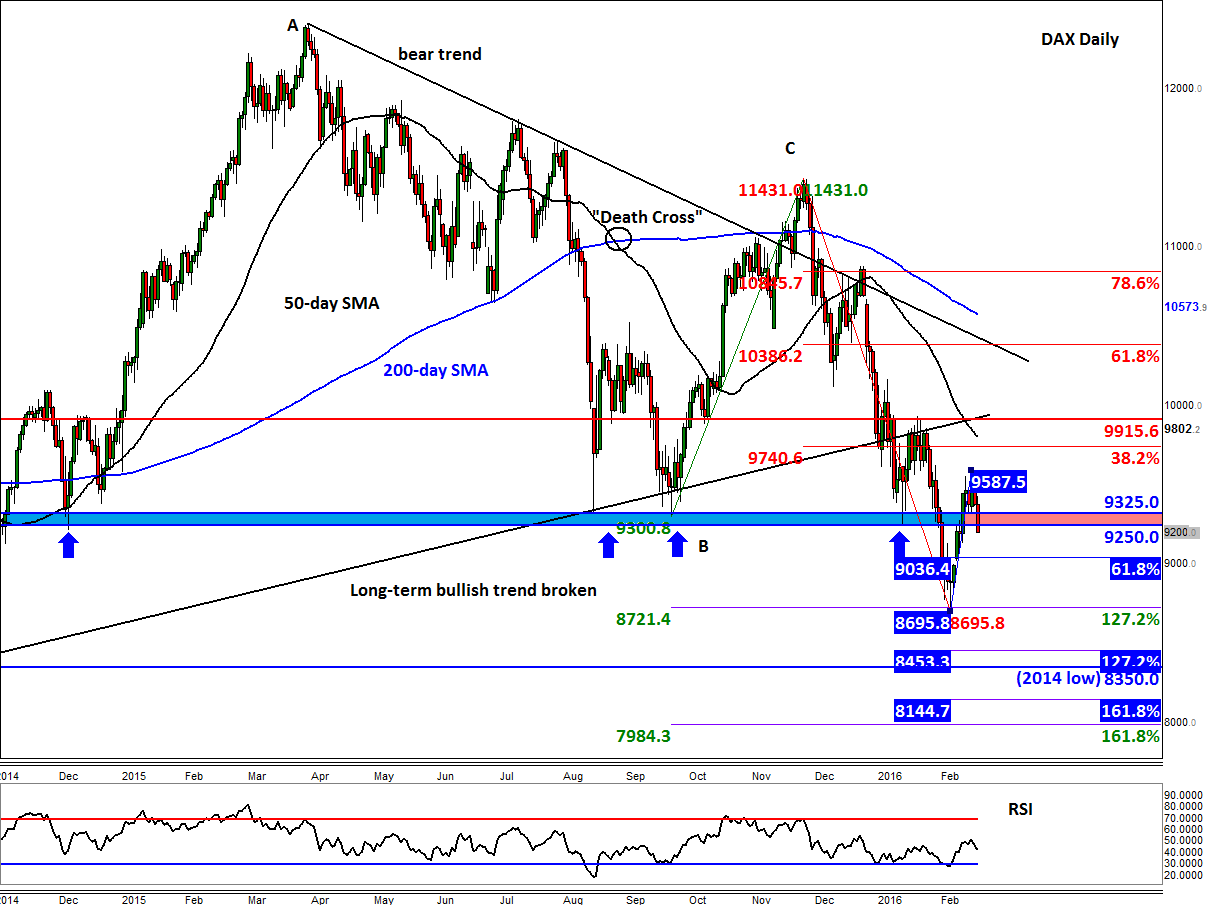