Dollar backs off from key resistance despite positive economic data

A series of better-than-expected US economic data was released on Tuesday to augment the very encouraging US retail sales numbers from this past Friday. Tuesday’s positive data for the month of April included: the Consumer Price Index (CPI) (0.4% rise vs 0.3% expected, an improvement over March’s 0.1% rise), Industrial Production (0.7% rise vs 0.3% expected, a vast improvement over March’s revised 0.9% fall), and Housing Starts (an annualized 1.17 million new buildings beginning construction vs 1.12 million expected, an improvement over March’s revised 1.10 million). Other US data that came out roughly as expected included Core CPI (0.2% rise) and Building Permits (1.12 million annualized). There was no US data released on Tuesday that fell significantly below expectations.

Despite these relatively positive results for the US economy, the dollar generally weakened on Tuesday morning, partly due to continued skepticism over the likelihood of another interest rate hike by the Federal Reserve during its eagerly-anticipated June meeting. In spite of higher inflation figures reflected in the CPI, the Fed Fund futures market as of Tuesday morning was only pricing-in around a 7.5% probability of a June rate hike.

Partially due to this continuing skepticism despite improving economic data, USD/CHF retreated from major resistance around the key 0.9800 level on Tuesday. This level has been tested three times since late March, but has not yet been breached to the upside. Although USD/CHF has been declining in a well-defined downtrend characterized by lower highs and lower lows since late last year, the past two months have seen the currency pair generally range-bound between 0.9800 resistance to the upside and 0.9500 support to the downside. The 0.9800 level is also the 50% Fibonacci retracement of the recent slide from the 1.0100-area high in March down to the 0.9500-area low in April. Both the 200-day and 50-day moving averages have virtually flat-lined due to the noted range-bound trading for the past two months.

Having reached up to and tentatively retreated from the noted 0.9800 level, USD/CHF is now at a critical technical juncture. With any sustained inability to breach 0.9800, the currency pair could continue to trade within its recently established range, potentially moving back down towards the 0.9500 support level once again. In the event of a breakout above 0.9800, especially with any continued improvement in US economic data going forward, the next major upside target is at the closely-watched parity level (1.0000). 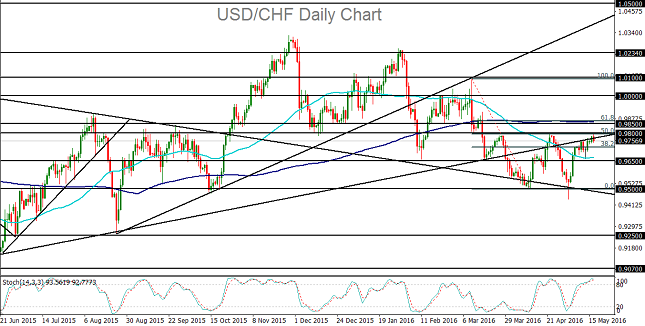 Is the move higher in AUD/USD set to continue?
By:
Joe Perry CMT