By :
Global Author
The US dollar dropped sharply overnight after a paper was released detailing San Francisco Fed President John Williams’ dovish-leaning assertions that appeared to oppose a near-term Fed rate hike. On Tuesday morning, however, New York Fed President William Dudley made seemingly conflicting assertions in a televised interview, stating that a rate hike at the Fed’s next policy meeting in September “is possible.” Dudley went on further to state his opinion that the US economy is in “OK shape” and that inflation is “drifting up a little bit.” Dudley’s comments led to a partial rebound for the dollar.

Recently, bets on a Fed rate hike this year have progressively diminished due in part to an overwhelming trend of global monetary easing by other major central banks, as well as some very recent US data releases that have shown unexpected weaknesses. Last week’s US retail sales, Producer Price Index (a key inflation indicator), and consumer sentiment data all surprised significantly to the downside.

On Wednesday, the focus will again be on the Fed, as St. Louis Fed President James Bullard will speak, followed by the release of minutes from the last FOMC meeting in July. These minutes may help to clarify further the Fed’s most recent consensus stance on interest rates, inflation, and economic growth, in the face of apparently conflicting positions on the part of individual Fed members.

The drop and partial rebound for the US dollar on Tuesday prompted the USD/CAD currency pair to hit its major downside target at 1.2800 before bouncing off that key support level and paring its losses. USD/CAD’s recent fall has been driven both by US dollar weakness as well as a two-week-long recovery in crude oil prices that has boosted the Canadian dollar. This drop for USD/CAD led to a breakdown last week below the key 1.3000 previous support level as well as the 50-day moving average and the bottom of a large rising wedge pattern.

With any further dovishness emanating from the Fed on Wednesday, as well as continued support for crude oil prices, USD/CAD could see significantly further lows after the noted breakdown. With any further move below 1.2800 support, the next major downside targets remain around 1.2650 support followed by the 1.2500-area year-to-date lows. 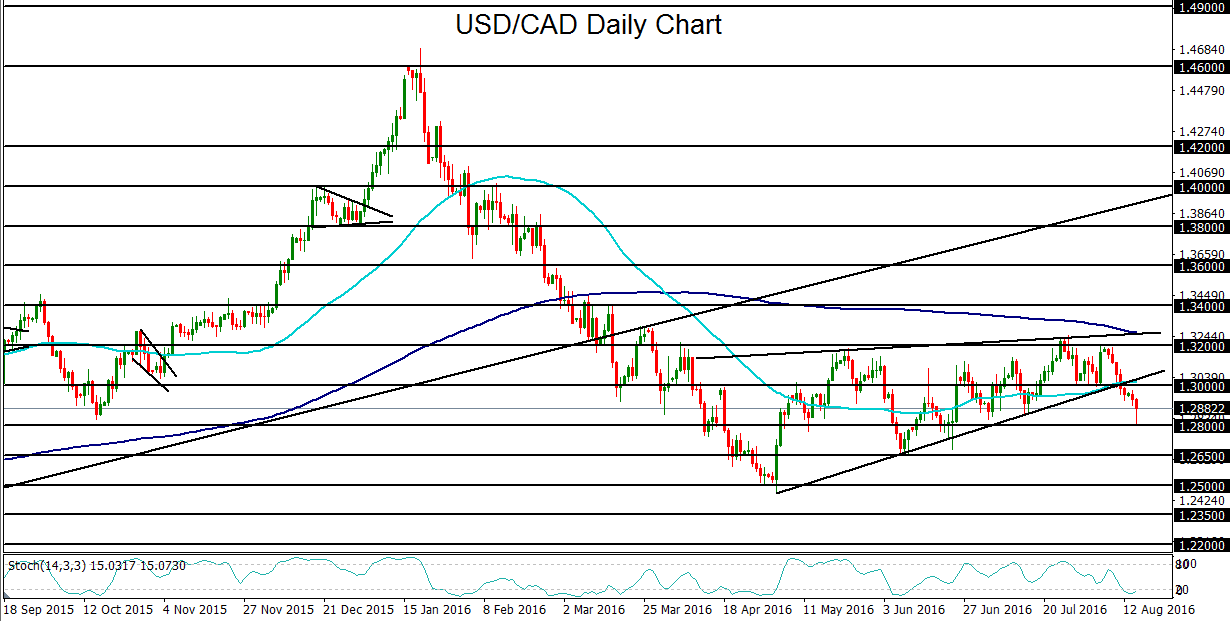