USD/JPY: Dollar extends gains in a busy week for US data

The dollar has staged a broad-based rally today, which caused the GBP/USD to tumble to a new 31-year low and the EUR/USD momentarily dipped below its 200-day moving average once again. The dollar has found support from the stronger ISM manufacturing PMI that was released on Monday. In addition to stronger US data, the dollar’s major rivals have weakened across the board with the GBP for example being hit by renewed concerns about the fallout of Brexit. What’s more, the strong performance of the equity markets and the stable oil prices has dented the appetite for safe haven assets. Hence, gold and the Japanese yen have both fallen. Consequently, the USD/JPY has been able to climb further higher today, hitting it highest level since 21st September at 102.50.

The USD/JPY could climb further higher unless this week’s key US economic pointers disappoint expectations in a meaningful way. There is no US data to look forward to today, so the momentum behind the dollar may remain in place for the time being. However from Wednesday onwards, things will pick up. The ADP private sector employment report will be published along with the ISM services PMI and factory orders, all on Wednesday. There is the usual weekly jobless claims data on Thursday, but Friday is obviously the key day as we will have the nonfarm payrolls report as well as speeches from several Federal Reserve members.  So make no mistake about it, it is going to be a very busy week for the dollar which should provide plenty of trading opportunities.

I last wrote an article on the USD/JPY a couple of weeks ago when we highlighted in detail the possibility for a bounce around the psychologically-important and long-term support level of 100. Then we looked at the monthly and 4 hour charts. On the monthly, we observed a hammer candle off the 100 level, though we noted the lack of follow-through was a concern. On the 4-hour time frame, there was a bullish Gartley pattern with the point D or support coming in at 100.50. As the updated 4-hour chart, below, shows the Gartley pattern predicted the low fairly accurately though price did slip through 100.50 by about 45 pips before bouncing back. Anyway support at 100 held, as did the rising trend line. A double-bottom pattern has now been established just above the 100 level. Since that low was formed, the USD/JPY has created a couple of higher highs and higher lows, and it has taken out its bearish trend line that can be observed on both the 4-hour and daily time frames.

On the Daily chart, we can see that the USD/JPY has also climbed above the 50-day moving average. The path of least resistance is therefore to the upside now. A few potential resistance levels to watch now include 102.80, 103.35 and 104.30/5 – these were all the swing highs on the short-term time frames. A potential move above 104.35 would create a higher high on the daily time frame. If seen, this would mark a clear break in the market structure of lower highs, potentially leading to further technical momentum buying towards the next high of around 107.50. 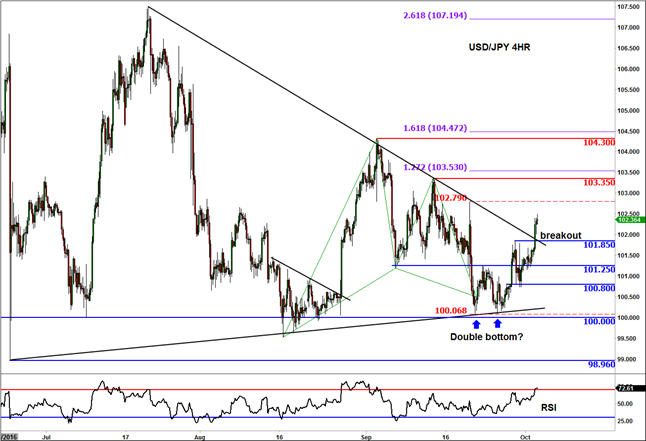 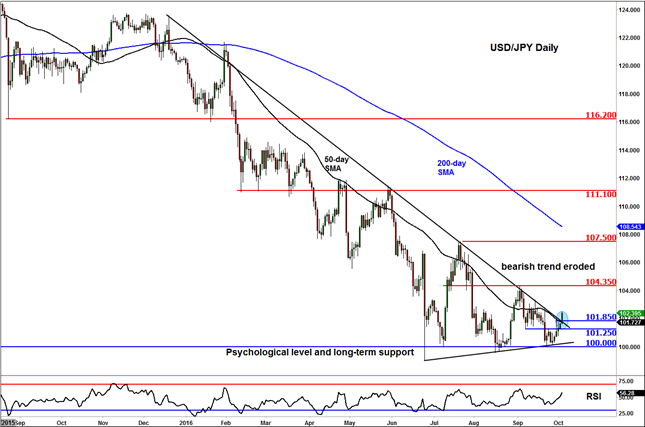