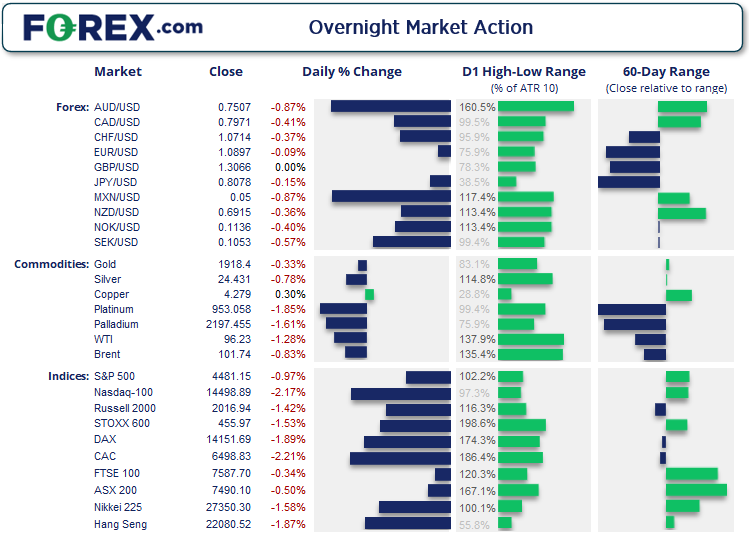 Wall Street was lower again overnight as the FOMC reinforced the view that an aggressive trajectory of rate hikes and balance sheet reduction is coming, starting at their next meeting. US equities were already under pressure the day prior following hawkish remarks from Daly and Brainard, but the minutes pushed the S&P 500 down to a 12-day low and test its 50-day eMA. 56% of its stocks declined, and 6 of its 11 sectors were in the red, led by consumer discretionary. Recovering to 4481, it has (for now at least) found support at the 50 and 20-day eMA.

Energy prices were lower on concerns that the latest surge in covid cases in China would dent demand for oil, and that IEA (International Energy Agency) would release more oil from stockpiles. WTI fell to a 14-day low of 95.73 to closed beneath last week’s low. Natural gas left an ominous reversal candle just beneath its record high on the daily chart. 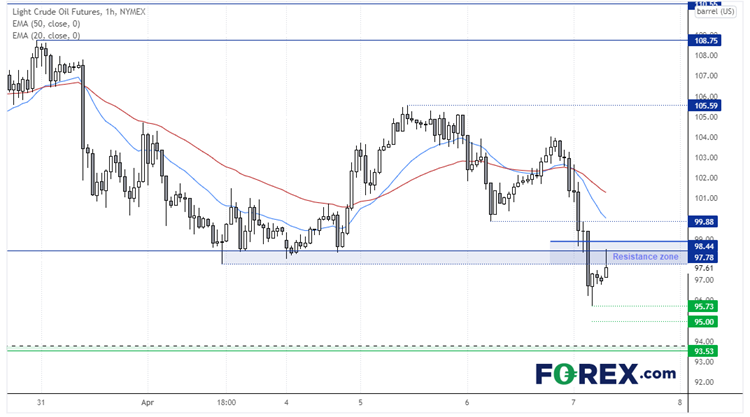 We can see on the hourly chart that WTI fell through 97.78 support, although prices have since pulled bac into a cluster of resistance levels around 98. The hourly candle is yet to close but it would be good to see a bearish hammer on this timeframe, or collection of reversal candles that close beneath the upper bounds of the zone to hint at a swing high. If satisfied that a lower high has formed, we’d then seek bearish setups to initially target 96, 95 and potentially 94, just above this thin support zone.

US dollar hits a near 2-year high

The hawkish FOMC minutes saw the US dollar index hit a 23-month high overnight, although its rally stopped just shy of 100. The day’s range was also its lowest of its 5-day rally so there is clearly some hesitancy to push immediately higher.

Commodity currencies were dragged lower by the selloff seen across energy markets, with AUD and CAD leading the way south. In fact the Canadian dollar looked past its solid PMI report, which touched a record high with stronger employment, although inventories were higher and delivery times slower. Still, this did work out well for our hunch that USD/CAD was due to mean revert. 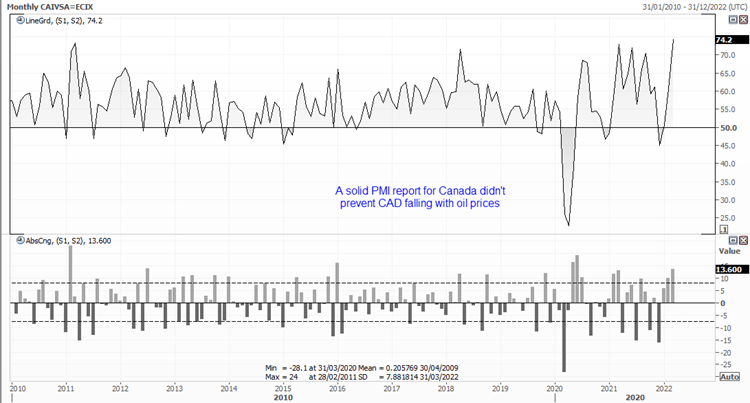 USD/CAD left a couple of clues on the daily chart that it may be due for a bounce. Its bearish leg was losing momentum and we saw two bullish pinbar failed to close beneath the January low. Furthermore, the stochastic oscillator generated a buy signal at the lower Keltner band over a week ago and then formed a bullish divergence. We’ve now seen a clear break of Tuesday’s bullish pinbar and rally to a 7-day high, although resistance from the 20-day eMA and weekly R1 pivot sit around 1.2573. If we see a break of the zone, it could suggest this current rally is more than an initial retracement. 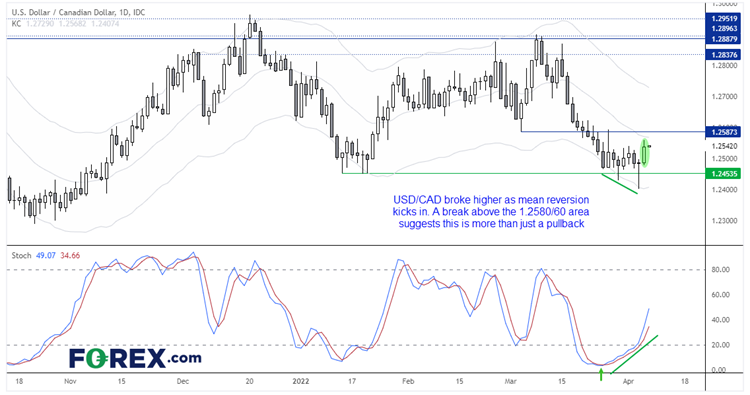