There are a host of factors that are causing flows to move into the US Dollar right now:

As a result, the US Dollar Index has pushed through the March 2020 pandemic highs at 102.99 to its highest level in nearly 5 years. 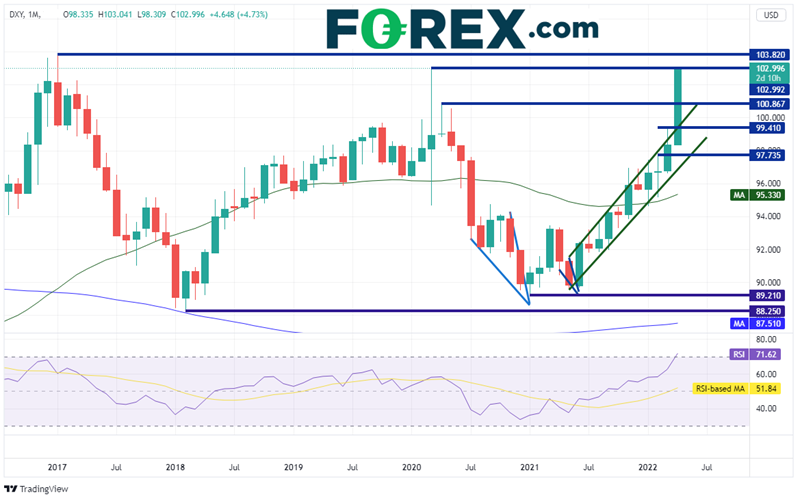 As the DXY continues to move higher (and stocks trade lower), many emerging market currencies are following along with it.  These include some of the Eastern European currency pairs, which had recently pulled back from new all-time highs after the Russian invasion into Ukraine.

USD/PLN broke out above its previous all-time highs on March 2nd of 4.3078, just days after Russian invaded Ukraine. The pair made a new all-time high of 4.6199 on March 7th and pulled back to the 50 Day Moving Average near 4.1474.  The pair then gradually had been moving higher once again.  However, with the big move higher in the US Dollar over the past few sessions, USD/PLN rocketed nearly 5% and traded above the 61.8% Fibonacci retracement level from the highs of March 7th to the lows of April 4th, near 4.4394.  The next resistance level isn’t until the previously mentioned all-time highs.  Notice in the panel on the bottom of the chart that the DXY and USD/PLN have become highly correlated, with a correlation coefficient of +0.95.  A reading of +1.00 means that the 2 assets move together 100% of the time.  A reading of +0.95 is pretty close. 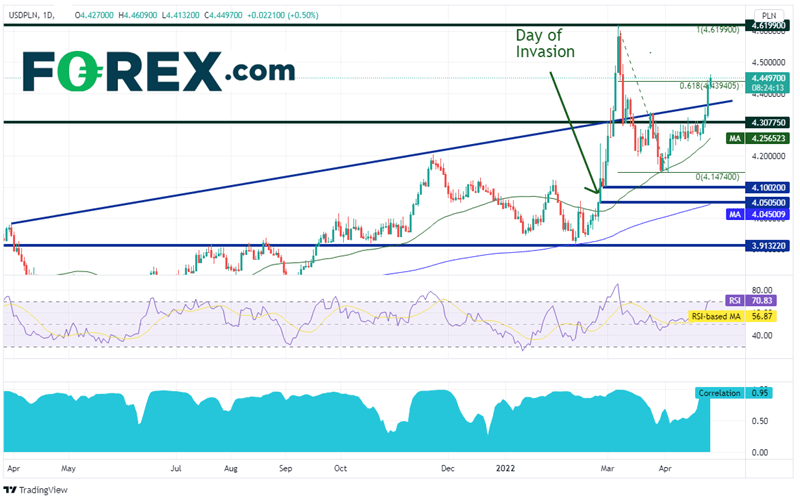 However also notice that the RSI has moved into overbought territory, an indication that USD/PLN may be ready for a pullback.  First support is at the long-term upward sloping trendline dating to March 31st, 2021 near 4.3650.  Below there, price can fall to the previous all-time highs at 4.3078, then the 50 Day Moving Average at 4.2566.

Despite raising interest rates by 100bps earlier in the week, USD/HUF has traded similarly to that of USD/PLN.  On March 2nd, the pair took out its previous all-time highs near 341.258 and made a new all-time high at 368.059.  USD/HUF then pulled back to the 50 Day Moving Average near 328.32 and slowly began moving higher.   However, with the breakout in the DXY over the last few days, USD/HUF is up nearly 6% and traded above the 61.8% Fibonacci retracement level from the highs of March 7th to the low of March 31st, near 352.878.  The next resistance level isn’t until the previously mentioned all-time highs.  Notice in the panel on the bottom of the chart that the correlation coefficient between the DXY and USD/HUF is +0.80.  Any reading at or above +0.80 is considered strong. 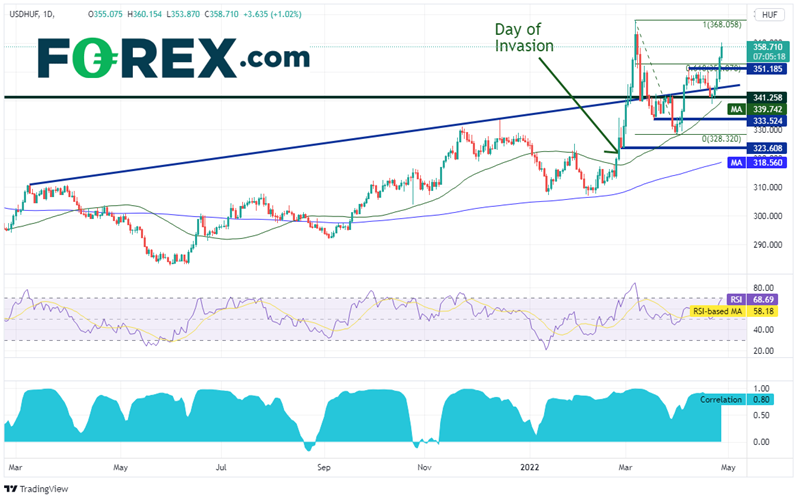 The US Dollar Index (DXY) has reached its highest level in nearly 5 years. As the DXY moves higher, it’s bringing Eastern European emerging market pairs along for the ride.  Given the strong correlations, if the DXY pulls back, watch for USD/PLN and USD/HUF to pull back with it!