ECB hawks out in force ahead of Eurozone CPI; EUR/GBP

The ECB will be raising rates when it meets for its interest rate decision meeting on September 7th.  The only question that seems to remain is “Will it hike by 50bps or 75bps?” Over the last few days, ECB members have been on the wires preparing markets for what could be a potential 75bps hike, despite the growing possibility of the Eurozone falling into a recession:

These comments come right before the Eurozone CPI Flash, which will be released on Wednesday.  Expectations are for a slight uptick to 9% YoY in August vs a July reading on 8.9% YoY.  Earlier today, Germany released it preliminary inflation data for July.  The headline Harmonized Inflation Rate was 8.8% YoY vs and expectation of 8.8% YoY and a July reading on 8.5% YoY.

As expectations increase for a higher interest rate hike on September 7th, so has the value of EUR/GBP.  The pair had been moving lower in a long-term channel.  On April 19th, 2021, EUR/GBP made a high of 0.8721 and has been moving lower since. The pair posted a false breakout through the bottom of the channel on March 7th, putting in a low of 0.8203.  As is often the case, when price fails to break through one side of the pattern, it often moves to test the opposite side. EUR/GBP broke out aggressively on May 5th, 2022 above the top trendline of the channel moved quickly to test the April 19th, 2021 highs!  Since then, the pair had been moving lower in a descending wedge formation.  However, yesterday, price broke above the top trendline of the formation and may be on its way up to the previous highs at 0.8721. 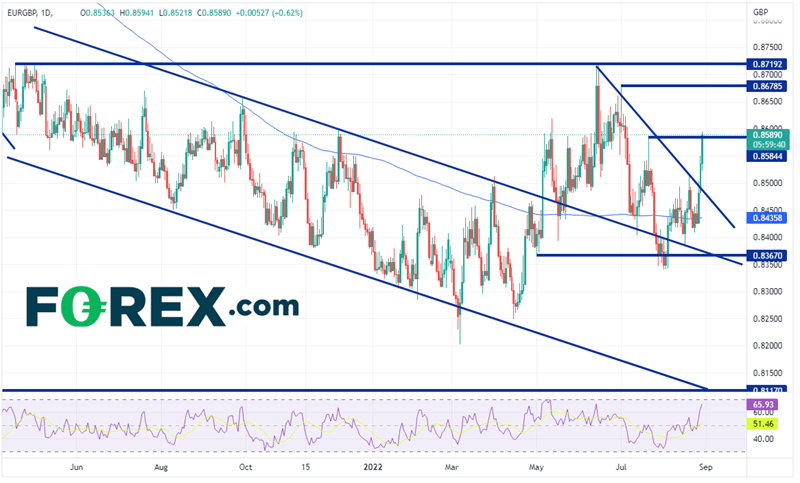 On a 240-minute timeframe, EUR/GBP has already moved above the 61.8% Fibonacci retracement and horizontal resistance between 0.8573 and 0.8584. If price can hold above the 0.8573 level, it opens the way for a move to horizontal resistance at 0.8679 and then the previous highs at 0.8721.  However, notice that the RSI is in overbought territory, in indication that price may be ready to pullback.  First support is below at the August 19th highs of 0.8511   Below there, price can move to the top, downward sloping trendline of the wedge near 0.8480 and then the bottom trendline of the wedge near 0.8375. 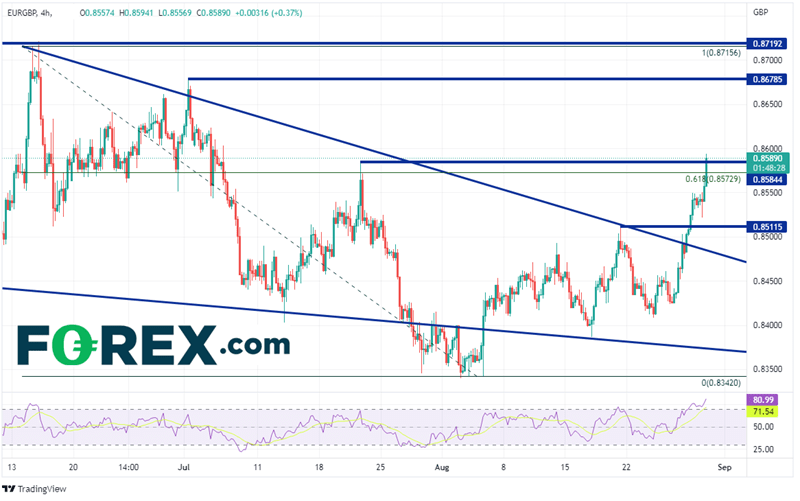 Hawkish ECB speakers over the last few days, combined with the lack of BOE speakers, have sent EUR/GBP to its highest level since July 6th.  Will it continue to move higher?   The Eurozone releases its CPI Flash estimate for August tomorrow.  A higher than expected reading could send the pair to 0.8721 in a hurry!