The ECB left rates unchanged, as expected, and announced that it will end asset purchases via the Asset Purchase Program (APP) on July 1st.  In addition, the Governing Council said that it intends to raise the key ECB interest rate by 25bps at its July meeting.  The committee also said that it intends to hike rates again in September, however the amount will be dependent on the inflation forecasts at that time.

Regarding inflation, the Governing Council raised baseline inflation significantly. The committee now sees 6.8% in 2022 vs 5.1% in the March projections, 3.5% in 2023 vs 2.1% previously, and 2.1% in 2024.  In the press conference, ECB President Christine Lagarde noted that inflation risks are still to the upside due to the Russia/Ukraine war and supply chain issues.  Lagarde also said that “if September projections put 2024 inflation at 2.1% or higher, rate hikes will be bigger than 25bps.”

Immediately following the interest rate decision announcement, EUR/USD was up nearly 20 pips as markets were focused on the pre-commitment of rate hikes in July and September.  As there was no level of rate hikes given for September, markets were seeing the possibility of a 50bps hike! 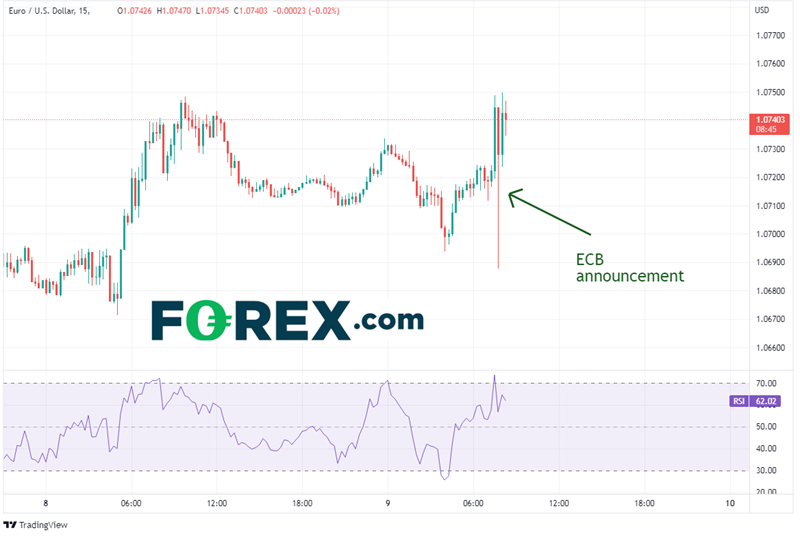 However, as the press conference progressed, traders became more focused on questions regarding the possible fragmentation of European debt due to rising yields.  Christine Lagarde commented that the ECB can deploy new instruments to tackle fragmentation.  So, if yields rise and spreads widen between the peripheral countries and the core countries, the ECB could re-enter the market and buy debt of the peripheral countries to bring down yields.  This helped push the EUR/USD lower.

On a daily timeframe, the price action in EUR/USD is forming a bearish engulfing pattern.  Price so far has held resistance at the 38.2% Fibonacci retracement from the highs of February 10th to the lows of May 13th, near 1.0787.  In addition, EUR/USD had a false break above the downward sloping trendline dating to February 10th.  Price also held below the highs of May 30th at 1.0786.  If today’s price closes below 1.0700, it would confirm the bearish engulfing pattern. 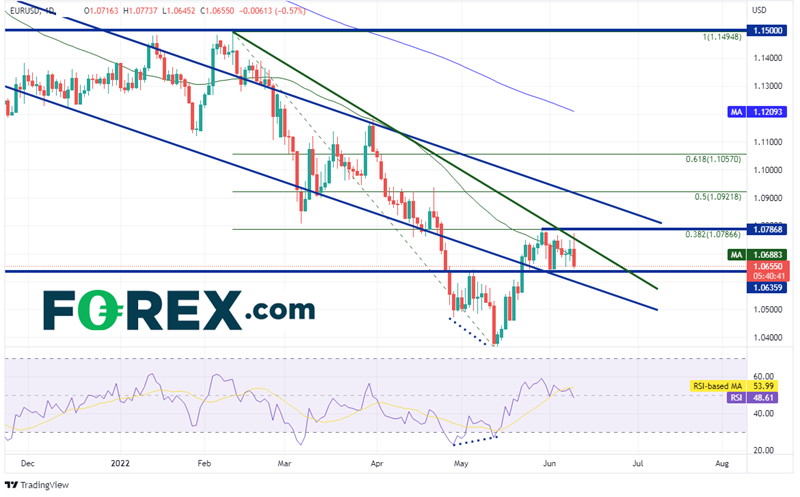 However, on a 240-minute timeframe, price has been forming a flag pattern, which points towards higher prices. If EUR/USD holds above the bottom trendline of the flag, near 1.0620, it could point to higher prices. This level is first support.  This is also the 38.2% Fibonacci retracement from the lows of May 13th to the highs of May 30th.  Below there, price can move to the 50% retracement from the same timeframe near 1.0568, then horizontal support near 1.0533.  If the bottom trendline of the flag holds and price moves back inside the pattern, first resistance is at today’s high and the top trendline of the flag near 1.0743.   Above there is minor resistance at the May 30th highs near 1.0787, then the 50% retracement level on the daily timeframe near 1.0922. 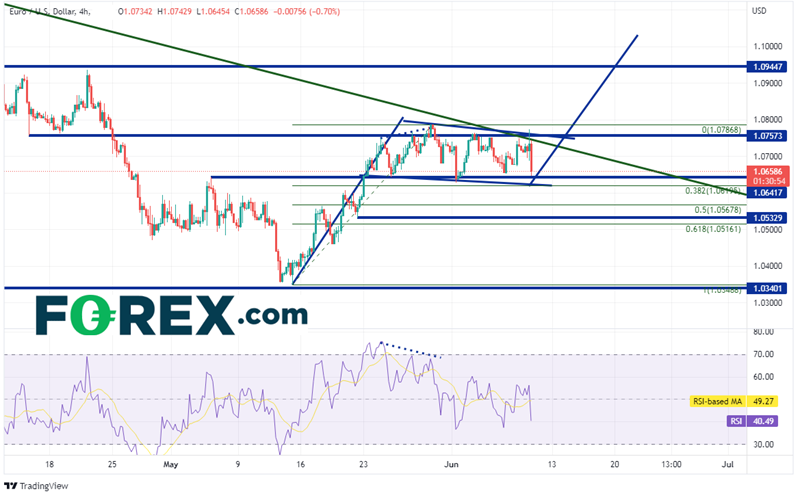 With the pre-commitment to raise interest rates 25bps at the July meeting, EUR/USD initially went bid.  However, when comments began in the press conference regarding the possibility of the fragmentation in Europe, EUR/USD sold off, as the ECB may in need a new bond buying program.  Watch the 1.0620, which looks the bull/bear line for EUR/USD.