ECB Preview: Will the ECB be all bark and no bite?

Europe is having a tough ride still with the coronavirus pandemic.  Some countries are still under lockdown.  Individual European counties have passed fiscal stimulus packages, however not to the same extent as some other major economies.  The vaccine rollout is moving slowly (just today JNJ said they are under “stress” to meet EU target of delivering 55 million covid-19 shots in Q2).  The economic data is still under desirable recovery levels.

At the last ECB meeting, the central bank said they will keep monetary policy accommodative until inflation is at their targeted level, which is still a distance away.   In order to do that, the ECB has 1.85 trillion euros to spend as they see fit, under the Pandemic Emergency Purchase Program (PEPP).  Thus far, the ECB has been conservative with those funds, however with the recent rise in yields over the last month, that may need to change.  German bunds reached a post-pandemic high on February 26th near -0.228. 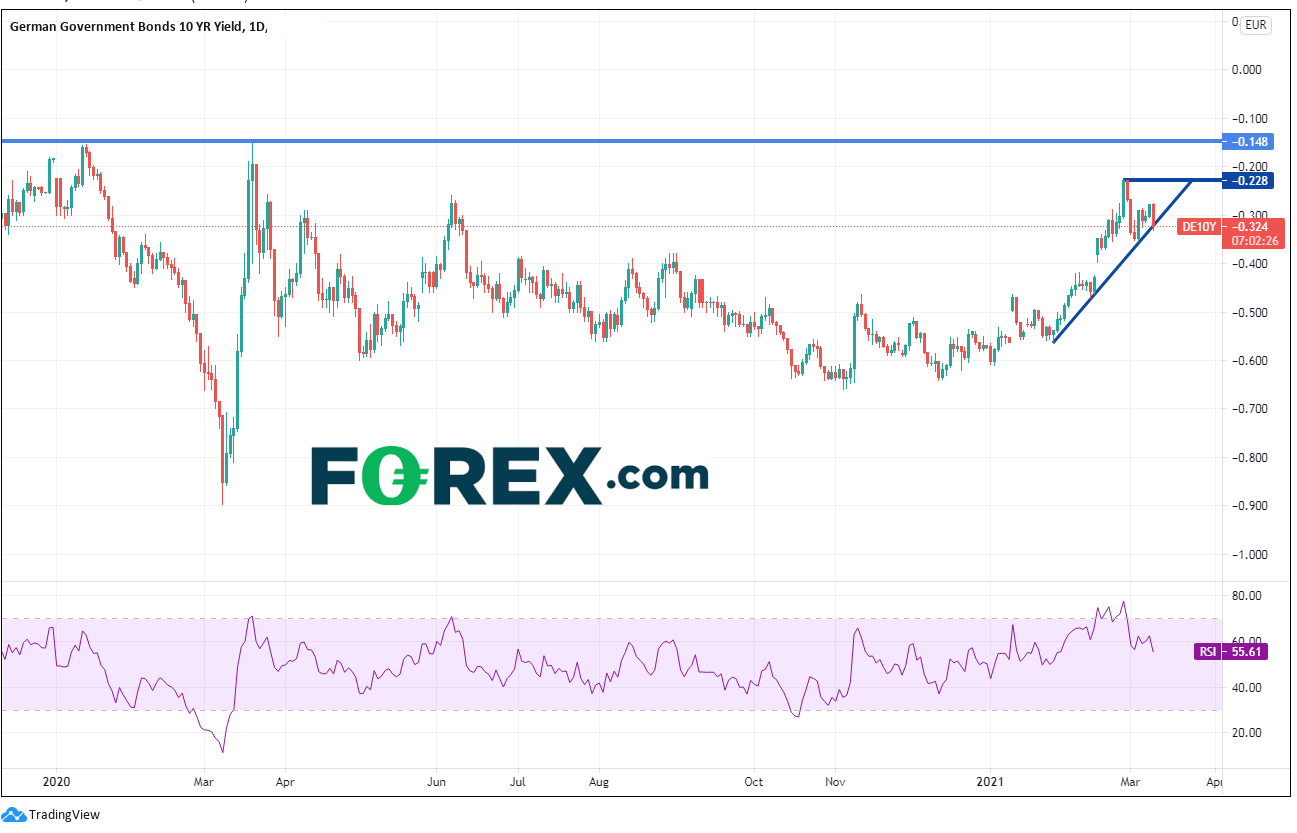 Some ECB members in recent weeks have called for the central bank to response to the rising yields by increasing the amount of bonds they are currently purchasing under PEPP.  However, data released Monday showed that the ECB only bought 11.9 billion worth on bonds last week, just slightly higher than the previous week. (The pace on bond buying has been slow).  Increasing purchases, thus helping keep yields low, is one avenue the ECB could take.  There is also talk that the ECB could extend PEPP past its expiration of March 2022.  This wouldn’t do anything near term, but it would show the markets that the ECB expects monetary stimulus to accommodative for longer than previously anticipated.

In addition, the Christine Lagarde and friends can also cut the Deposit Facility Rate further.  The key interest rate currently stands at -0.50.  Another minus 10bps may not make much of a difference, but it will show the ECB is willing to do something.

One thing the ECB has always done is to try and talk down interest rates and the value of the Euro is to use verbal intervention.  Using such phrases as “whatever it takes”  and “we still have plenty of tools available” have helped in the past but may be overplayed.  What more can Lagarde say to help keep rates low?

Also, expect downward revisions to current year growth and inflation forecasts.  Given the lockdowns throughout Europe in Q1, the full year projections for 2021 should be guided lower.

Christine Lagarde will have to tiptoe through the upcoming ECB meeting this week.  Increasing bond purchases and talking down rates may already be priced into the market.  The risk is to the upside; that Lagarde will say something that is not as dovish as expected.  With EUR/USD moving lower over the last week, be careful of a ‘Buy the rumor, sell the fact” trade.