The FTSE 100, like the ASX 200, is making hard word of gains since printing its elongated bullish hammer last Thursday. So take note that the ASX 200 rolled over from the open today, exceeded our bearish wedge target and is now trying to hold above 6900 after a -2% drop.

Given Asian markets and futures are pointing lower, the FTSE could also be in for a rough ride today. Also take into account that a bearish pinbar formed yesterday and last week was a bearish engulfing candle, we are keen to explore bearish setups if they arise. As prices failed to hold onto gains above 7067.40 resistance, we’d see a break below 6988.14 as a hint that bears were about to drive it lower.

Forex: Dollar clings to support ahead of FOMC minutes.

The US dollar index sits just above its three-month low ahead of today’s Fed minutes and could move lower if the minutes are deemed dovish enough. That said, 89.20 support may prove to be a tougher nut for bears to crack given it is the year-to-day low, so we don’t want to be overly bearish at these low levels. Still, as we are yet to see a compelling sign of a trough we are also wary the dollar could bounce higher from a technical perspective, if nothing else.

Despite Monday’s bearish engulfing candle suggesting that EUR/GBP had formed a swing high near the 0.8620/30 resistance zone, Tuesday clawed back most of its losses and prices are now probing the resistance zone as we speak. With a host of inflation data set for release shortly, it could be a flip of a coin as to whether resistance holds or folds. A break above Monday’s high assumes a bullish breakout and deeper retracement, but we would now need to see a break beneath 0.8580 before re-confirming a swing high had formed on Monday. 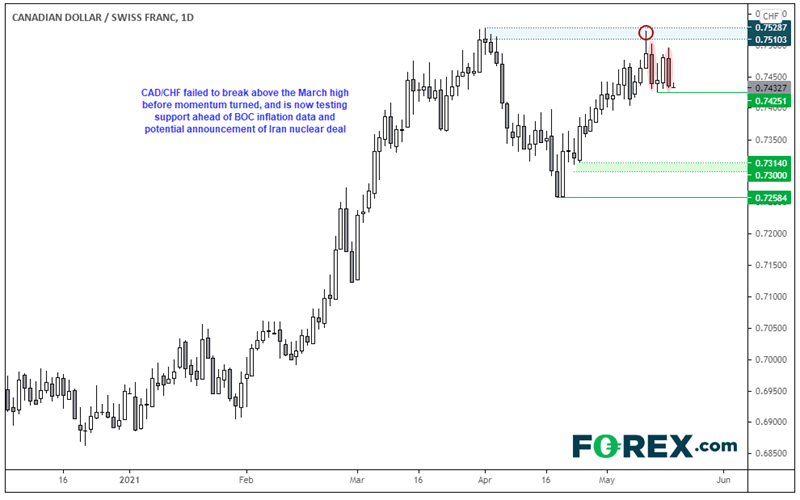 CAD/CHF could become a decent tactical short should data and news leans the ‘bearish’ way over the next 24 hours. Canada is set to release inflation data so, if that is to fall short, CAD could find itself under selling pressure. But (perhaps more importantly), if the US ease sanctions on Iran and confirm they will rejoin the Iran nuclear deal, oil could find itself under pressure (due to oversupply concerns) and drag CAD down with it. Given CHF is another strong currency of late then CAD/CHF could be of interest for bears if the two scenarios just mentioned come to fruition.

CAD/CHF printed a bearish hammer last week after failing to break its March high and is on track for a bearish hammer this week. The daily chart shows a bearish pinbar, bearish engulfing candle and bearish outside day over the previous five session, and prices are resting just above 0.7425 support. Given the bearish signs at these highs and the potential for CAD bulls to get caught off guard, our bias is for a break of support and move towards 0.7300. We just need the catalysts outlined above and it could happen sooner than some may expect.

Gold is hovering near its highs ahead of today’s Fed minutes, helped so by the US dollar remaining anchored near its lows. As long as there is nothing in them which tells traders that a hike may come sooner (which we think is unlikely) then gold could potentially break higher, as long as the US dollar index breaks to new cycle lows.

Silver broke beneath yesterday’s bearish pinbar low to confirm the near-term reversal, although if minutes are more dovish than expected, perhaps its downside could be limited. If prices continue to move lower we would look for 17.66 to hold as support before reconsidering a new bullish bias.

Oil prices are lower overnight as traders are concerned over potential over-supply if the US rejoins the Iraq nuclear deal. Reports suggest we may find out today whether that occurs – so keep oil markets on your radar as a successful deal could send prices lower, whilst failure to fulfil expectations with a deal could send prices higher. 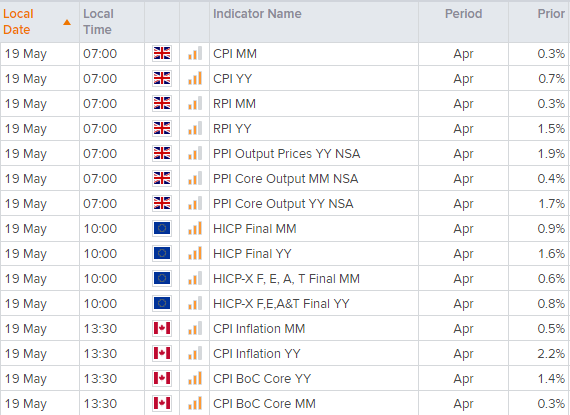