Following on from the sharp reversal on Tuesday, European markets were under pressure in this first half of Wednesday’s session. Safe haven flows into the Swiss franc pushed the EUR/CHF pair close to parity, with the EUR/USD chopping around the key 1.05 handle. Investors were awaiting the release of German CPI, expected to show a fresh record high of +8.8% YoY from 8.7% previously. Traders were cautious of further hawkish remarks from heads of BoE, ECB and FOMC at the annual ECB forum.

Fresh concerns about stagflation in Eurozone emerged after Spain’s annual CPI accelerated to more than 10% in June (from 8.7%) to reach its highest since 1985. The news dented already-downbeat sentiment further, resulting in fresh losses for Europe’s major indices.

With inflation showing no signs of easing, consumer confidence and spending could be hit hard, dragging the global economy into a recession. In the US, we saw the University of Michigan’s consumer sentiment survey crash to record lows, and The Conference Board’s (CB) barometer that was released yesterday showed a similar finding. Business confidence wasn’t great either, judging by the latest read on the Richmond Fed manufacturing index which fell to -19 compared to -5 previously to reach its lowest level since May 2022 as new orders plunged.

The net result? Stagflation. That is where the global economy is headed, and central banks won’t be able to do much about it. If they fasten their belts too tightly, this will hit GDP, while if they loosen their belts again, this will only fuel inflationary pressures further. But they must do something. Given their remit to control inflation, this means more interest rate hikes, even at the cost of economic growth.

What does it mean for the markets?

I was really surprised to see the performance of European equity markets last week, with major indices rising noticeably. Investors were showing resilience in the face of rising interest rates, inflation, and recession risks. Granted, some indices and individual names were bouncing back from severely oversold levels, which should have been expected. But as I have been consistently warning, let’s not underestimate the big macro risks facing investors.

The above macro risks should be reflected in company earnings in the week ahead.

Against this backdrop, it is difficult to justifying buying stocks. I am therefore of the view that the markets will remain in the “sell-the-rallies” rather than “buy-the-dip” mode. Expect to see further losses for global equity prices.

The Ibex has been in a new bear trend since the end of May after its breakout attempt above old resistance at 8913 failed. Since then, it has been making lower lows and lower highs, with the selling pressure accelerating upon the breakdown of the 200-day moving average: 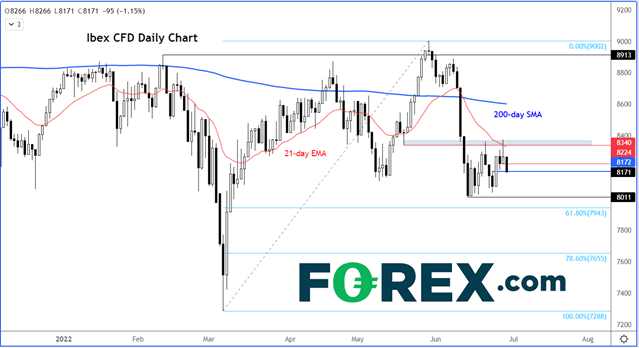 At the time of writing, the Ibex was testing short-term support around 8170ish, so there was a possibility for a bounce. But if the buyers do not show up here, then a move below 8011 will become likely, the current June low.

FX traders are continuing to buy the CHF after the central bank raised interest rates more than expected and said the currency was no longer overvalued. We have seen a fresh break in the CHF/JPY today, while the USD/CHF has fallen to a new low on the month. There has also been intense pressure on the EUR/CHF, with the pair nearing the 1.0000 handle. Dropping to parity looks almost inevitable from here: 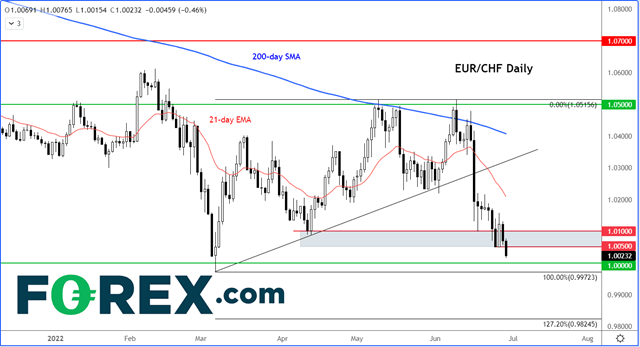