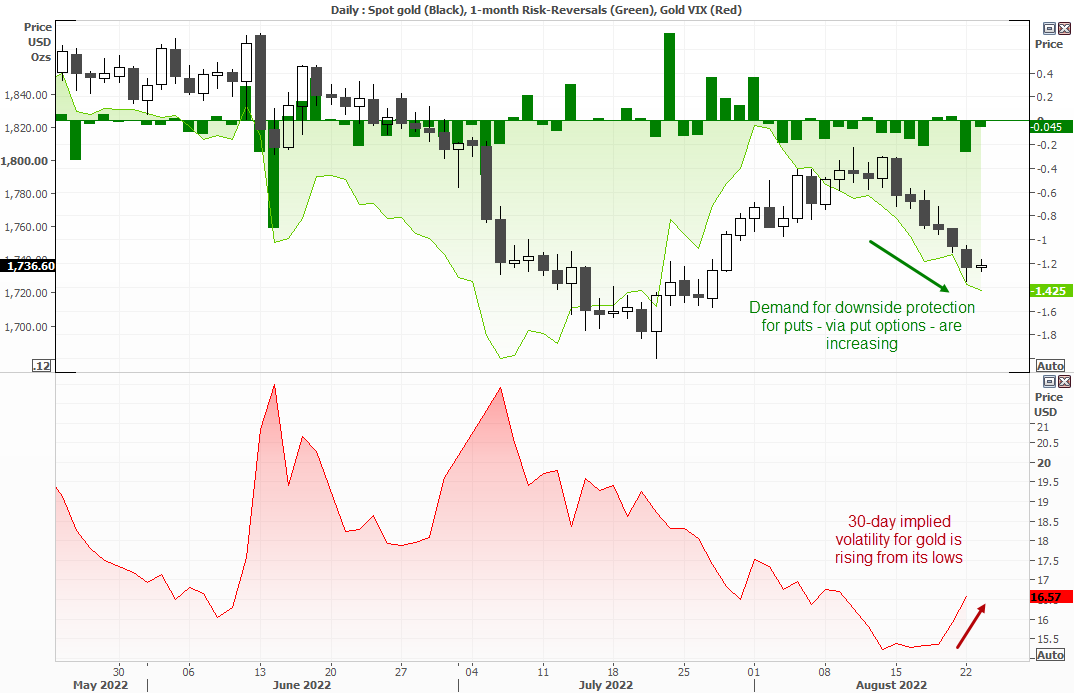 Rising benchmark gas prices have kept the euro and indices across the region under pressure with renewed fears of a recession. The DAX has continued to fall in line with last week’s bias, EUR/USD reached support levels previously mentioned and EUR/CHF saw the downside we anticipated yesterday. Asian equities have continued to move lower during risk-off trade.

The Jackson Hole Symposium is the key focus for traders this week, with Core PCE inflation a close second. And gold will be highly sensitive to both of these events. Concerns that Jerome Powell will deliver a hawkish tone to his speech alongside a recession warning has seen the US dollar continue to surge and weigh on the yellow metal, as it gets dragged lower with metals and risk sentiment in general.

A clear indication that gold investors are concerned is that the CBOE gold volatility index (GVZ) and downside protection – via put options – are both on the rise. Against this backdrop then a bullish case for gold is a weak inflation print, and less hawkish than expected speech by Powell. And that’s not looking too likely, so I’m on guard for further losses and for gold’s potential to fall to $1700.

Flash PMI’s weaker in parts of Asia, focus now switches to Europe and the US

Australia’s economy contracted for the first time in a year, according to the S&P Global flash composite PMI. At 49.8, it is its lowest print since last August and the July figure was also revised lower to 51.1 from 50.9. The services PMI also contracted at 49.6 and, whilst manufacturing remained expansive at 54.5, it is its slowest rate of growth since August. Japan’s PMI’s expanded but at a slower rate. And that begs the question as to whether we will PMI’s across Europe and the US soften further later today. 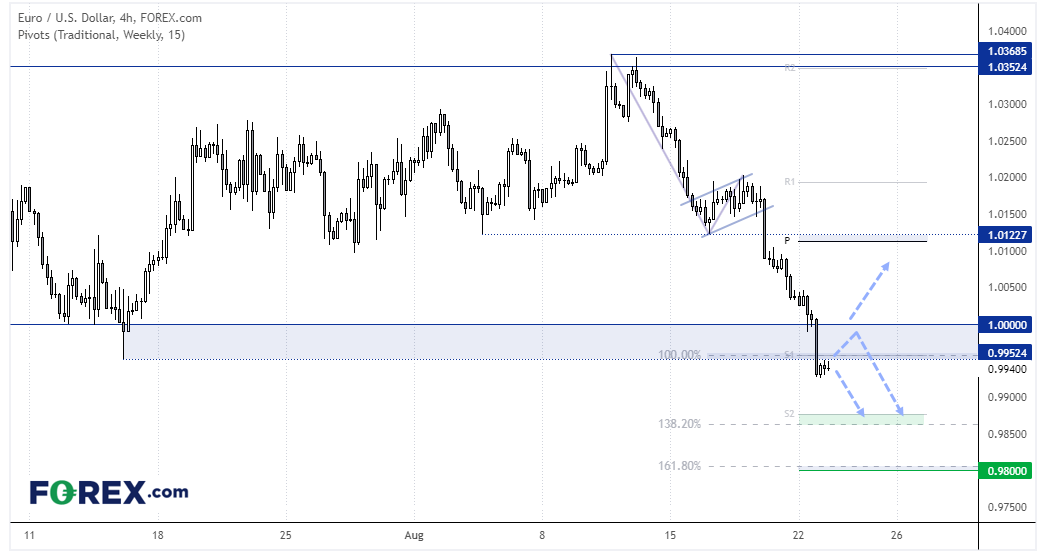 EUR/USD has seen a daily close below parity for the first time since December 2002. It also has the potential to fall further should benchmark gas prices continue to rise and the US dollar remain bid. Under ‘normal’ conditions I’d be more mindful of the fact that prices are likely overextended to the downside, at least over the near-term. But given the macro backdrop can prompt such moves to remain in overbought or oversold levels longer than many would like, it remains plausible that the downside for the euro is not yet over.

However, we would prefer to see some more consolidation on the 4-hour chart, or even a retracement back towards parity, before reconsidering longs. The bias remains bearish below 1.000 and for a move towards the 0.9870 support zone. A break above 1.000 runs the risk of triggering stops and seeing a move higher.

A host of national PMI reports will be released today, starting with Europe, UK, then on to the US. Prices rises across Europe saw the headline composite PMI for the Euro Zone contract in July, unexpectedly. And expectations are for a faster pace of contraction, given prices have only continued to rise since. PMI’s for the UK are expected to soften yet remain expansionary – but it could be wise to be on guard for a contraction here also. 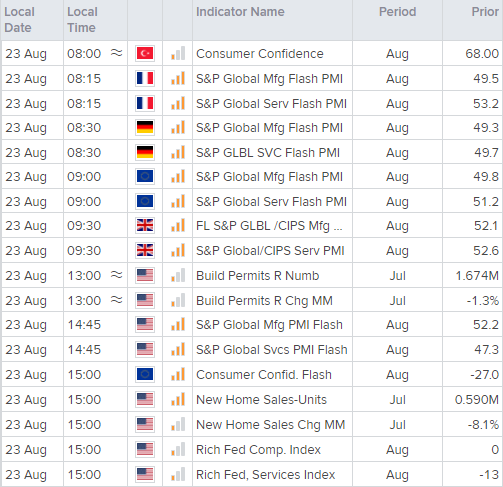 Latest Research
NFP preview: No signs of a major slowdown in jobs yet!
Bullish bets for gold futures are on the rise
The US dollar index (DXY) hints at a swing low ahead of NFP
Polish Central Bank keeps rates unchanged; Will more Central Banks pivot?
GBP/USD off lows following another bruising session
OPEC+ agrees to a 2,000,000bpd cut!