The dollar has extended its post-NFP drop at the start of this week, most notably against the pound which has lifted the GBP/USD pair back to a high so far of 1.3180. The EUR/USD and buck-denominated gold and silver were also higher at the time of this writing, although the AUD/USD and CAD/USD were lower, suggesting the dollar’s weakness wasn’t widespread. As a reminder, US employment fell by 33,000 in September as jobs in food services and drinking hubs were hit hard due to the impact of hurricanes Harvey and Irma. But it wasn’t all doom and gloom, as average hourly earnings grew more than expected, with the year-over-year rate climbing to 2.9% from 2.7% in the previous month. So, it remains to be seen whether the dollar weakness will gather any real momentum or the selling is just a blip. Unfortunately, the economic calendar looks rather quiet for most part of this week, so it may take a while for the dollar to tip its hand.

US CPI key data for the week on Friday…

Indeed, there’s very little on the agenda today, although we have had some data earlier from China and Europe. The September Chinese Caixin Services PMI came in at 50.6, down from 52.7 the previous month and below 53.1 expected. In Europe, German industrial production rose 2.6% in August, much higher than 0.9% expected, while the Eurozone Sentix Investor Confidence index also topped expectations as it printed 29.7 versus 28.6. There are holidays in the US and Canada today, which means there won’t be any data from North America, although Wall Street is open for trading as usual. Tuesday will see the release of official manufacturing data from the UK, France and Italy. The FOMC’s last meeting minutes will be published on Wednesday, followed US PPI and crude oil inventories a day later. Friday will likely be the most important day of the week in terms of data as we will have the latest US CPI and retail sales, among a couple of other macro numbers, to look forward to.

The dollar’s uncertain fundamental direction is mirrored on the charts, chief among them being the EUR/USD. The world’s most heaviest traded pair has been trending lower ever since it failed to break through long-term resistance around the 1.2040/5 area in early September – previously this was a significant support level as it marked the low post the Eurozone debt crisis in July 2012. However, the sellers have struggled to exert strong enough pressure to cause the EUR/USD to break back below the long-term support at around the 1.1700/10 area on a daily closing basis. This level was the August 2015 high, the peak of the prior 2-year trading range. Once resistance, this level is now offering support. It is interesting to note that the EUR/USD has formed a hammer candlestick pattern on Friday around this key support level. Thus, this continues to show that the buyers are still trying to defend their ground. While the hammer is a bullish price candle, we are yet to see a break of a key resistance level or some other confirmation to suggest that the buyers are back in town. For me, a clear move back above 1.1825 would mark a break in market structure, although there are a couple of other shorter-term levels that are also worth watching in the interim, including 1.1785. Meanwhile any decisive move back below 1.17 level, ideally on a daily closing basis, would confirm a change in the near-term trend to bearish. In this case, 1.1615 and 1.1555 would then become the next immediate bearish objectives. 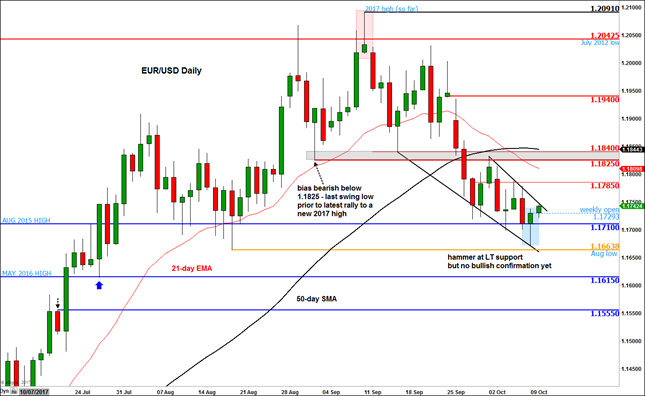