The FOMC hiked rates by 75bps today, as expected. The statement was similar to that of July's.  However, the accompanying “dot plots”, which show where FOMC members think interest rates are headed, were much higher than the previous one.  In addition, inflation forecasts were revised higher and growth forecast were revised lower.  See our complete FOMC recap here. As a result of these actions, the US Dollar continued its bid higher as the DXY reached its highest levels since June 2002 at 111.58.  In addition, stock markets and bonds both tumbled as yields rose.  2-year yields reached as high at 4.12% and the 10-year yields reached a high of 3.64%.  Gold also reached its lowest levels since April 2020.

However, during Fed Chairman Powell’s press conference which followed, traders reversed price action on many of these instruments in what may be considered “Buy the rumor, sell the fact”.  This has been consistent with the price action after some of the recent FOMC meetings.  As such, the US Dollar pared earlier gains and stocks and bonds bounced.  Gold blasted $35 higher during the press conference. 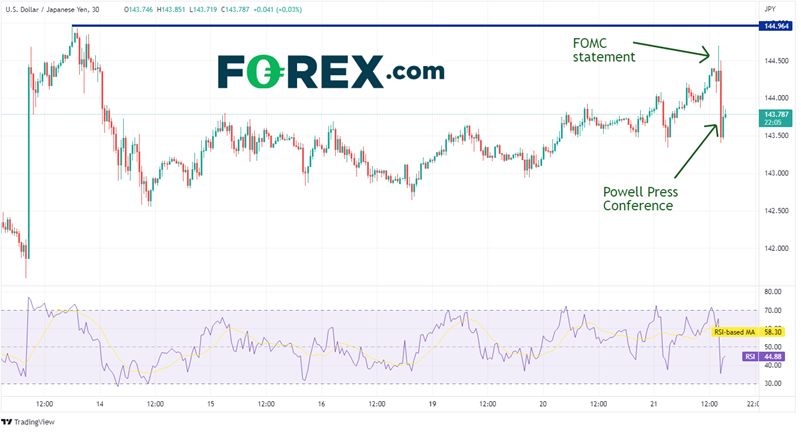 On a daily timeframe, price traded near the September 7th highs of 144.99, however, as mentioned, was pulled lower by the reversal in the US Dollar. However, USD/JPY is still making higher lows as price tries to take out the recent highs. This sideways price action over the last two weeks has allowed the RSI to unwind and move back into neutral territory.  This could be giving the pair the “all clear” to move higher.  Resistance above the 144.99 level is at 147.65, which is the highs from August 1998.  First support is at the lows of September 9th at 141.50.  Below there, price can fall to support at the July 14th high of 139.39, and then a confluence of support at recent lows and an upward sloping trendline dating to March 31st at 135.80. 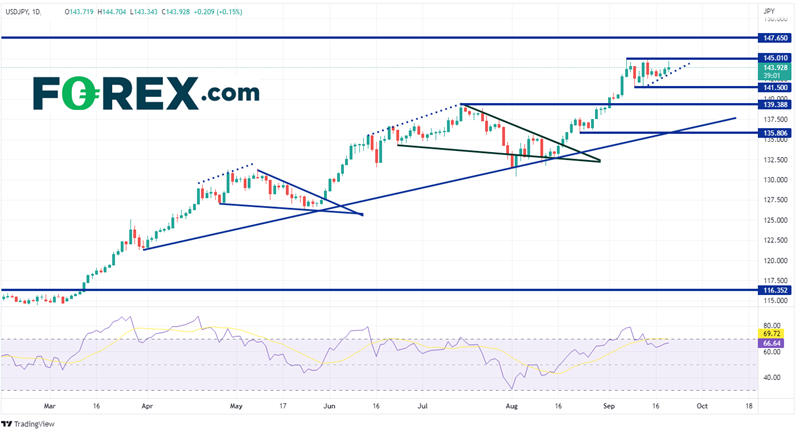 As for other central bank meetings, within the next 20 hours markets will hear from the BOJ, SNB, Norges Bank, BOE, and SARB.  Will traders’ reactions be the same as that of the reaction to the FOMC? Possibly.  Traders may be in for a wild Thursday.  Manage risk accordingly!