As we noted in our FOMC meeting preview report, there was always going to be only an outside chance of any changes to monetary policy at today’s Fed meeting…and as it turned out, that’s exactly what we saw.

Despite the lack of immediate policy changes though, the tone of the statement and Jerome Powell’s press conference was nonetheless critical for market sentiment as the central bank weighed ongoing price pressures, an improving labor market, the surging pandemic, the sharp drop in stocks to start the year and countless other variables.

What did the FOMC statement say?

If I had to summarize today’s FOMC statement in a word, I’d call it flexible.

Rather than committing to a specific path for monetary policy in advance, Jerome Powell and Company acknowledged all the competing crosswinds and opted to reiterate its current plan to rapidly wind down its quantitative easing program while hinting that interest rate liftoff is likely coming as soon as the next Fed meeting in March:

While some traders thought the central bank may opt to end QE early or even try to head off inflation by raising interest rates immediately, the committee stuck to the proverbial script, maximizing its flexibility and buying time for the economy to normalize.

Following the recent precedent, Fed Chairman Powell used the press conference to refine the central bank’s message, striking a much more hawkish note than the more tepid monetary policy statement. Some of the highlights from press conference follow:

In other words, Powell made it as clear as possible that the Fed was willing to start raising interest aggressively, starting as soon as the next FOMC meeting, and continue doing so until inflation showed signs of falling.

Market reaction to the Fed meeting

Not surprisingly, markets took these comments as a signal that tighter policy was coming, and we’ve seen a predictable response. The US dollar and short-term treasury yields are both rising in tandem, with the 2-year treasury yield rising to 1.12%, its highest level since February 2020. Meanwhile US indices are falling on the day to erase earlier rises, as are more risk-appetite-sensitive currencies like the Australian and New Zealand dollars.

AUD/USD in particular is interesting in the wake of the FOMC meeting, with the currency pair extending the drop out of its previous bearish flag pattern. Moving forward, the path of least resistance for AUD/USD remains to the downside, with critical support at 0.7000, the 18-month low, in sight as we head toward next week. A break below that key level would open the door for a steeper drop toward 0.6900 or the 50% Fibonacci retracement of the pair’s post-COVID rally below 0.6800. 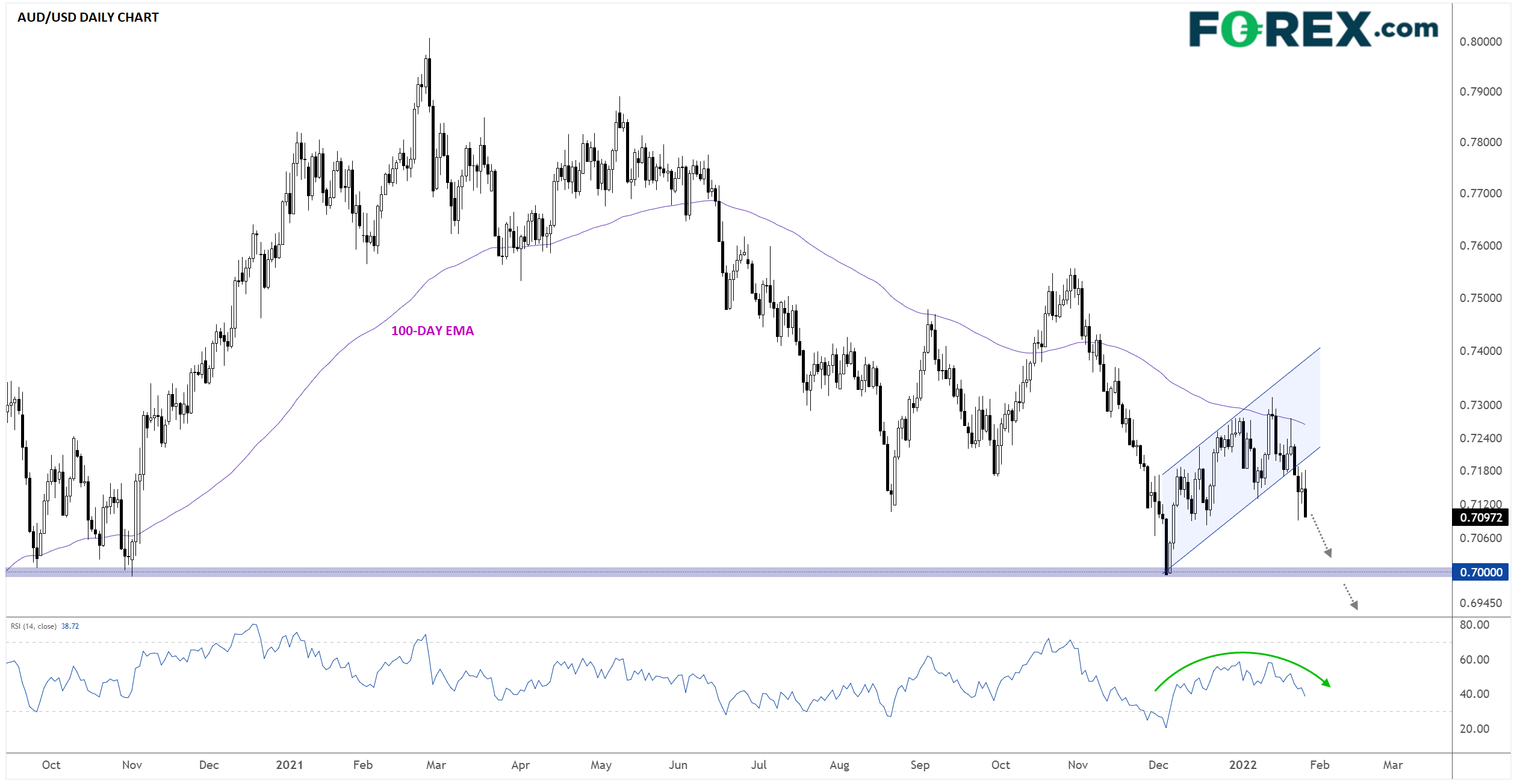