The FOMC minutes from the June 14-15 released today told us what the markets already knew going into the meeting: that the inflation outlook had deteriorated and that a 75bps rate increase was needed. However, the Committee also noted that policy may be even more restrictive in time, and that many see significant risk of entrenched inflation.  As a result, the Committee raised its forecasts for inflation and lowered forecasts for growth.  In addition, Fed officials saw a 50bps or a 75bps hike at the July meeting as likely.  This is a Fed that is afraid of inflation getting out of control.  And indeed, Fed Chairman Powell has been whistling the same tune since the FOMC meeting: bringing down inflation will be painful and could even crash growth.  However, it must be done quickly to prevent rapid price growth from becoming entrenched.

The US Dollar Index has been on the move higher since May 2021.  The DXY moved in an orderly channel from 89.53 up to 99.94, before breaking above the channel in mid-April 2022.  As it became more apparent that inflation was continuing to rise and the Fed must raise rates, the DXY continued to rise above the top trendline of the channel.  On May 13th, the US Dollar Index reached a high of 105.00, before pulling back to test the top trendline of the channel.  The support level held, and it was off to the races again, with prices moving higher in an ascending wedge formation.  The expectation is for price to move lower out of an ascending wedge, however yesterday, price broke above the top trendline of the formation and continued higher. Today, the DXY traded to the 161.8% Fibonacci extension from the highs of  May 13th to the lows of May 30th, near 107.30.  Horizontal resistance also crosses at the same level, dating to December 2002.  The next resistance level is the highs from September 2002 at 109.77.  However, if the price action of the DXY proves to be a false breakout, the US Dollar Index should pull back inside the wedge and test the other side near 104.60.  Below there, price can pull back to the lows of June 15th at 103.41, then horizontal support at 102.78. 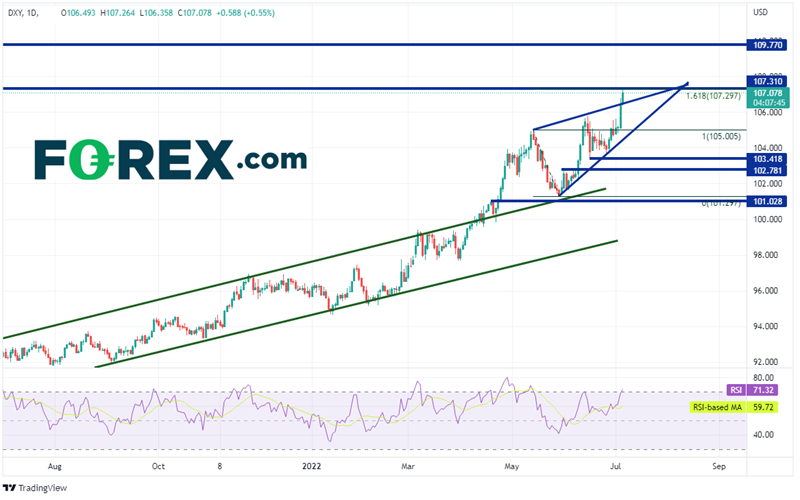 Because the Euro makes up 57% of the US Dollar Index, EUR/USD and DXY move in opposite directions.  Therefore, it would be sense that as the DXY is making 20-year highs, EUR/USD is making 20-year lows, trading at its lowest levels since December 2002.  Today the pair reached a low of 1.0161, breaking through the 127.2% Fibonacci extension from the lows of May 12th to the highs of May 30th.  Below is additional support at 161.8% Fibonacci extension from the same timeframe at 1.0084, then the bottom trendline of the longer-term channel and psychological support at 1.0000. First resistance on the daily timeframe isn’t until the previous lows at 1.0340.  Above there, the pair can trade to the top of the downward sloping channel near 1.0575, then the highs form June 27th at 1.0615. 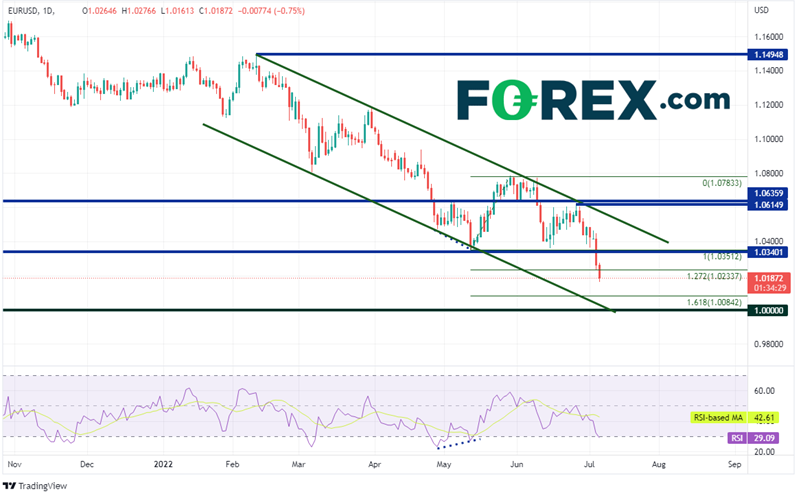 The FOMC Minutes from the June 14-15,2022 meeting told a story of a scared Fed that will do anything to stop inflation from increasing, even if it means slowing growth.  The DXY has been reflecting this by trading at its highest level in 20 years.  As EUR/USD trades opposite the DXY, EUR/USD is at its lowest levels in 20 years.  Watch NFP on Friday to see if the jobs data paints a picture of an economy that can handle higher rates, without losing too many jobs!