At the November 2nd FOMC meeting, members unanimously agreed to hike the Fed Funds rate by 75bps to bring the key rate to 3.75%-4.0%.  The statement from the meeting said members agreed that ongoing rate hikes were necessary until rates were “sufficiently restrictive”.  In addition, the statement noted that “in determining the pace of rate hikes, we will consider cumulative tightening, policy lags, and economic and financial developments”.  However, during the press conference which followed, Fed Chairman Powell stated that the incoming data suggests that the ultimate level of rates will be higher than previously anticipated.

The FOMC Minutes released on Wednesday showed that a substantial majority of officials said a slowing in the pace of rate hikes would be appropriate soon.  In addition, participants agreed that a slower pace of rate hikes would allow the FOMC to better assess the progress towards its goal, given the associated lags with monetary policy.  However, “various” Fed officials saw rates peaking at a higher level, which concurs what Powell’s comments in the press conference.  Since the last meeting, numerous Fed speakers have been hinting that the December rate hike will only be 50bps.

On November 2nd, the DXY initially took the statement to mean that the Fed would be dovish.  However, it immediately went higher after Powell noted that the terminal rate would be higher.  The DXY closed November 2nd near unchanged at 111.55, with a long lower wick.  It continued higher into Friday, reaching a high of 113.15.  However, after the markets had more time to digest the comments, the DXY traded 220 pips lower near 110.72.  Upon doing so, it broke through the bottom trendline of a symmetrical triangle and the Index hasn’t looked back since.   The DXY paused its move lower at the 50% retracement level from the lows of March 31st to the highs of September 28th near 106.34.  Today, after the FOMC Minutes were released, the DXY fell to 106.03. 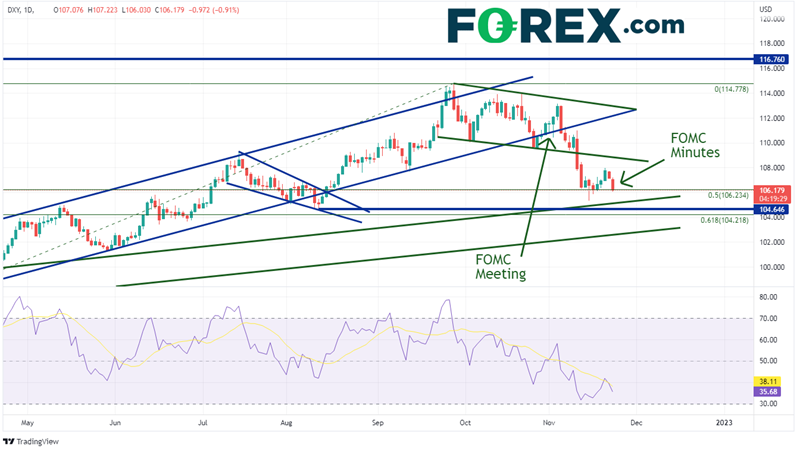 On a 240-minute timeframe, the DXY broke lower out of an ascending wedge.  The target for the break of an ascending wedge is a 100% retracement, which is 105.34.  This is also the first support level. Below there, price can fall to horizontal support at the lows of August 10th at 104.64, then the lows of June 16th at 103.42.  However, if the DXY moves highs (especially during these next few days of illiquid markets), the first resistance is at the bottom trendline of the previous ascending wedge near 107.50.  Above there, price can move to the highs of the wedge at 107.99, then the 50% retracement from the highs of November 10th to the lows of November 15th at 108.17. 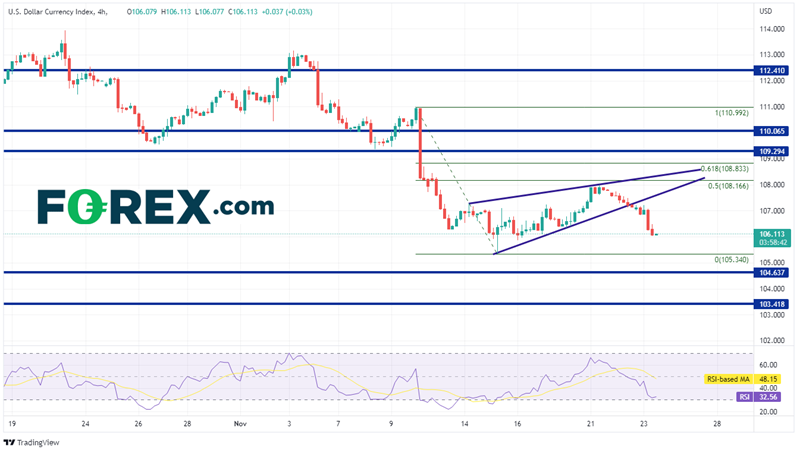 Will the US Dollar index continue to move lower?  Based on today’s FOMC Minutes it appears that the Fed wants to hike rates at a slower pace in December than it did in November.  However, the Minutes also showed that the Committee members see rates higher than it did previously.  If the Fed cuts by 50bps at the December meeting, the DXY should move based on the guidance (dot plots) rather than the rate hike itself!

GBP/USD clings on but UK economy faces tough road ahead
By:
Fawad Razaqzada