What did the FOMC do?

The US Federal Reserve hiked rates by 75bps to 1.75%, as expected. This is the largest increase in interest rates since 1994.   Markets had been pricing in a 50bps rate hike until Monday, when “leaked” reports suggested the FOMC would hike by 75bps.  During the press conference which followed, Fed Chair Powell indicated that at the May meeting ,the Committee had suggested that a 50bps would be appropriate in June, but it would also depend on incoming data.  As a result of the higher than expected May CPI and the higher than expected Michigan Inflation Expectations, both released on Friday, the Committee felt that a 75bps hike was more appropriate than 50bps at this meeting.

In addition, according to the Fed’s “dot plot” the Committee sees rates at 3.4% at the end of 2022.  This would imply another 165 bps of tightening this year.  The Committee also sees rates at 3.8% in 2023, before falling to 3.4% in 2024.  However, Powell noted that the pace of rate hikes will depend on the incoming data and although he doesn’t expect that 75bps increases will be common, he expects that the Committee will raise rates by 50bps or 75bps at the July meeting. 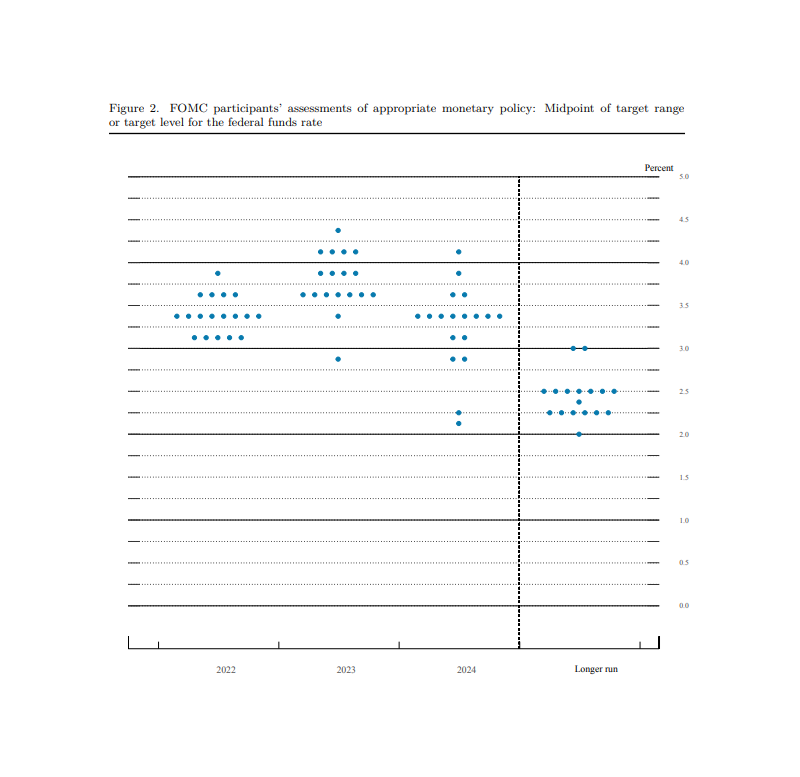 Regarding inflation, the Fed statement said that it is “strongly committed to returning inflation to its 2% objective” and that it ”expects the labor market to remain strong”.  Fed Chairman Powell noted in his press conference that it is essential that the Committee brings down inflation, however supply constraints have been longer than anticipated and Covid related lockdowns in China will likely make these issues even worse. By no surprise, the Committee sees inflation risks to the upside.  He also noted that fluctuations in commodity prices could take the possibility of a softish landing our of the Fed’s hands.

Regarding growth, forecasts were cut to 1.7% from 2.8% in 2022 and 1.7% from 2.2% in 2023.  Raising inflation forecasts comes at the expense of growth.  Powell mentioned during the press conference that there is no sign of a broader slowdown in the economy.  After a Q1 GDP reading of -1.5%, Powell will have to hope for a positive print in Q2 to avoid a technical recession.  The first reading for Q2 GDP will be at the end of July, after the FOMC’s next meeting.

The US Dollar Index had been moving aggressively higher over the last 4 days.  However, during today’s press conference, the DXY began to move lower in what may be perceived as a “Buy the rumor, sell the fact” trade.  If price continues to move lower, first support is at the lows from June 14th at 104.62, then the 38.2% Fibonacci retracement level from the lows of May 30th to the highs of June 15th, near 104.07.  Below there, price can fall to the 50% retracement level from the same timeframe near 103.54.  However, if the markets decide that given the hawkish nature of the FOMC the DXY should go higher, first resistance is at today’s high of 105.79, then the 127.2% Fibonacci extension from the highs of May 13th to the lows of May 30th, near 106.01. 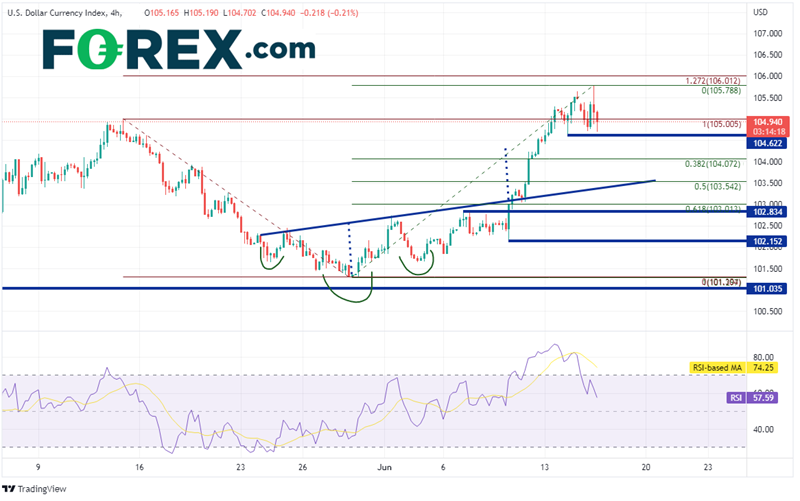