The major European stock indices have rebounded nicely in recent days as banks and miners continue to recover their poise. At the time of this writing, benchmark indices were up between 1.5 and 2.0 per cent here while US index futures pointed to a higher open on Wall Street later.  Among the European banks, Crédit Agricole shares have surged 12 per cent after the French lender confirmed plans to simplify its ownership structure and delivered above-forecast full-year results. In London, miners Glencore and Anglo American were leading the charge with gains 10.0 and 7.50 per cent, respectively. Glencore’s shares have risen on the back of news the firm has completed the early refinancing of a credit line. This has helped to reduce investor anxiety over the miner’s ability to manage its large debt pile in the midst of one of the worst commodity routs in history. On a macro level, the latest ONS data shows UK employment continued to rise between October and December, with earnings moderating slightly. A record 31.4 million people were in work, though the rate of unemployment remained unchanged at 5.1%. Excluding bonuses, earnings rose unexpectedly to 2.0% from 1.9%, while earnings including bonuses moderated to 1.9% from 2.0% previously. The forward-looking employment indicator jobless claims, or the change in the claimant count, fell by a surprisingly large 14.8 thousand applications month-over-month in January. Yet the pound only showed a moderate reaction as the data failed to change the market’s view about the outlook of UK interest rates.

It has been a broad-based rally so far with only a handful of stocks in the FTSE trading marginally lower, mostly defensive names. The key event later today is the release of the FOMC’s last meeting minutes, which my US colleague Matt Weller covered last night here. As Matt mentions, we have "heard, at great length and in minute detail, everything there is to know about Fed Chair Janet Yellen’s views on the economy in last week’s Humphrey-Hawkins testimony to Congress." It could be a bit of a damp squib, in other words. That being said, Matt argues that "traders will [still] be keen to see how many voters were apprehensive about raising interest rates too quickly (i.e. starting in March), as well as how the committee views the amount of "slack" in the labor market." The key point is that if the Fed appears to have already been more dovish than expected then it could give stocks a shot in the arm because since that meeting US economic data has generally deteriorated. Expectations that US rates will remain low for longer may boost the appeal of higher-yielding equities, especially given the fact that the Bank of Japan and the European Central Bank have also turned more dovish recently.

But the on-going volatility in crude oil prices remain one major worry for stock market investors. Although oil prices have bounced back slightly following yesterday’s news (when a conditional agreement was reached between large oil exporting countries to freeze oil production at January’s levels) they could fall further in the short-term now that hopes of an imminent OPEC production cut have been dashed. If oil falls, energy stocks could follow suit. This won’t be good news for the FTSE.

As we reported on Friday, the FTSE had reached an exhaustion point around the 5570 area, where we expected to see a bounce back. After all, the index had created a Bullish Butterfly pattern and the RSI had formed a clear divergence with the index, which correctly suggested that the selling pressure was waning. Though the FTSE has bounced back about 450 points from its multi-year low of 5495 already, that’s not to say it can’t go much higher from here.  Who knows, a significant bottom may already be in place. The daily RSI has not reached "overbought" levels of 70 or above yet either. But like all the other major indices, one should treat the FTSE as "guilty until proven innocent." At this stage, the rally can only be seen as an oversold bounce in a downward trending market. Only when the bearish trend is violated can we say more confidently that a bottom has been reached. It is important to note that generous bounces in bear trends are common. This often provides plenty of trading opportunities: short-term buying trades for the bulls and opportunities to enter short at better levels for the bears. Those who had had been "stuck" in holding loss-making long trades are also provided an opportunity to exit their positions, either at or near breakeven.

The fact that the FTSE is still inside a large bearish channel and below its main moving averages as well other key resistance levels means the bulls should remain nimble, while the sellers need to be patient. Going forward, some of the key resistance levels to watch include the 50-day moving average at 5960, followed by 6000, a psychological level which was previously also support and resistance. As mentioned, only a break above the resistance trend of the bear channel would be deemed a strong bullish outcome, which would be confirmed with a breakout above resistance and the long-term 38.2% Fibonacci retracement level at 6120. On the downside, the previous reference points will be some of the potential supports to watch; among other levels these include 5770, 5600 and 5495. 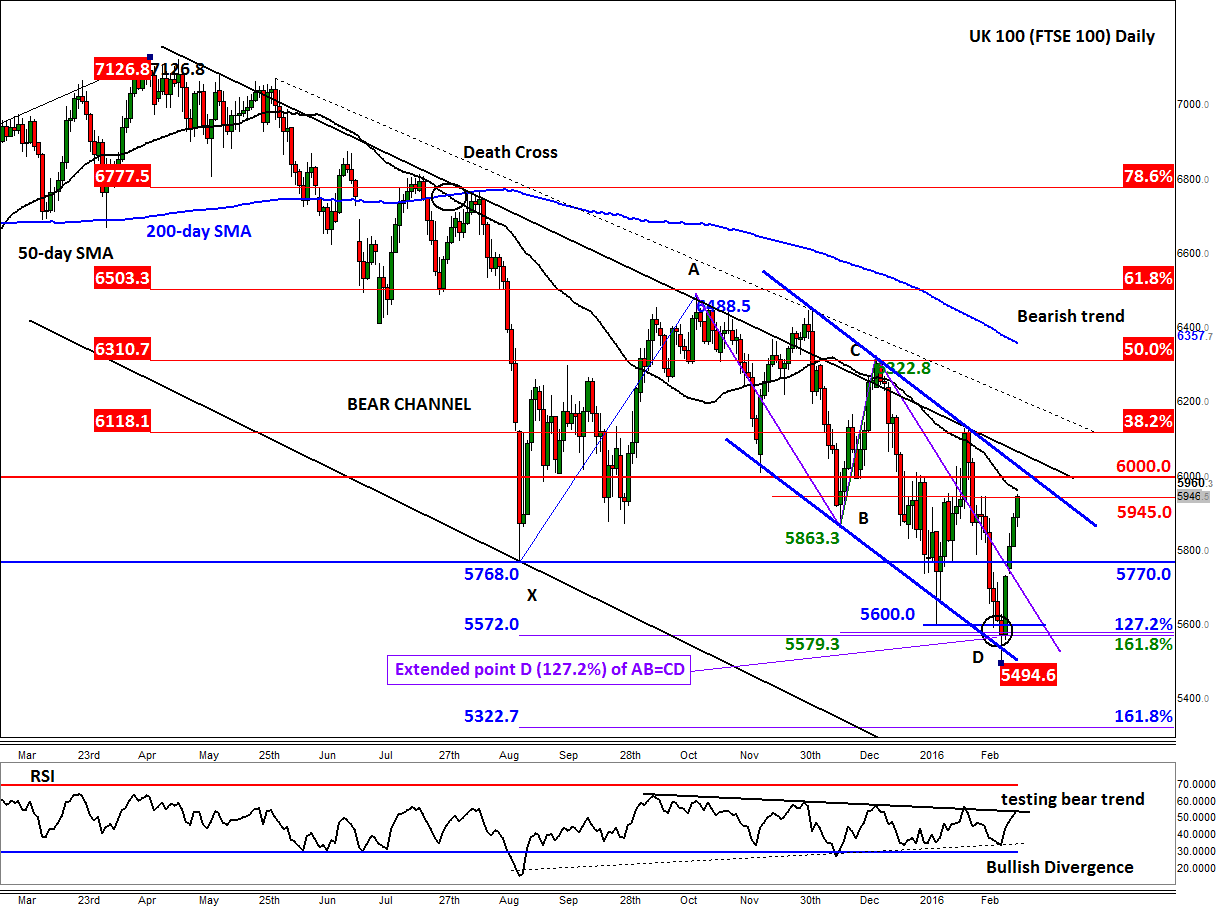