Topics covered in this report:

The FX markets have been fairly contained for much of Monday’s session due to the lack of any major news, slightly firmer stock markets, and the US being out for a bank holiday. However, we are likely to see some aftershocks from last week’s major central bank announcements, which could see the likes of the Japanese yen, Swiss franc, euro and US dollar all come into focus again from Tuesday onwards.

Spill over from commodity markets

The week ahead itself is not as busy as last week, which means FX volatility is likely to be lower. However, it is possible that there will be some spill over from the weakness in commodity prices we have observed last and at the start of this week. This is something that may put downward pressure on commodity currencies, so watch the likes of the Aussie and kiwi closely. Meanwhile, the hawkish rhetoric at the Federal Reserve continues. This means the Fed remains the most hawkish of central banks out there, which should limit the downside for the US dollar – especially against currencies where the central bank is still dovish. In other words, the Japanese yen.

There have been some suggestions that the US dollar may have topped out, because of the lack of any follow-through in the dollar’s bullish trend in the aftermath of the Fed’s rate increase last week. While that may turn out to be the case, I am not convinced we have seen the top for the dollar, although the likes of the Swiss franc may be able to rise more against USD in light of that surprise rate increase from the SNB.

The thing is markets always move based on surprises as there is the assumption that the “smart money” fully discounts everything that is known. Using this logic, the Fed’s 75bp hike was not a surprise as it had been communicated through several financial news wires for about a week that they would in fact raise by 75 rather 50 bp. During that week we saw the USD appreciate against everything...until the FOMC did what they were now expected to do. At this point, all the “street money” bought the dollar but the “smart money” who had already anticipated such a move, sold the currency that they had bought earlier.

But the above explanation does not necessarily mean the dollar has topped out. The Fed continues to remain the most hawkish among the major central banks. This should keep the dollar supported against currencies where the central bank is still relatively dovish, such as the Japanese yen and to a lesser degree the euro.

Indeed, there was no deviation from the Fed’s hawkish path, after the latest commentary from the central bank’s Christopher Waller. Waller said he would support another 75-basis-point rate increase at the FOMC’s next meeting in July. That is, if economic data continues to come in as he expects. Fed Chair Jerome Powell is due to testify Wednesday before US lawmakers, and his remarks about the future path of monetary policy will be scrutinized closely.

As mentioned, the hawkish rhetoric at the Federal Reserve continues. This means the Fed remains the most hawkish of central banks out there, which should limit the downside for the US dollar – especially against currencies where the central bank is still dovish – especially the Japanese yen. The USD/JPY has reclaimed the 135 handle after BOJ’s inaction last week, and it remains poised to potentially accelerate towards 140 from here, with no further obvious resistance levels in sight: 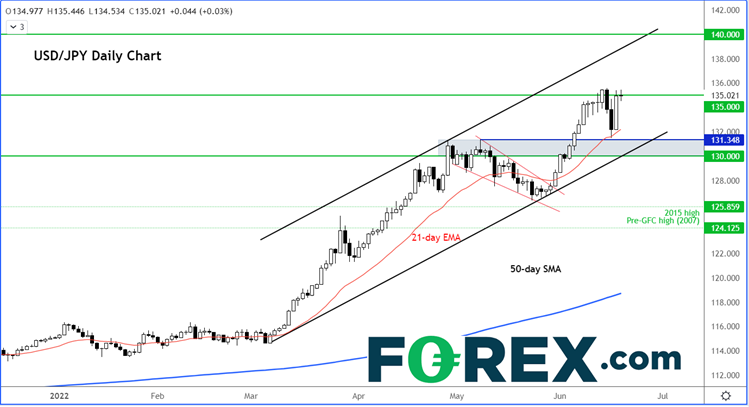 With regards to some of the other central banks, there were a few surprises. The SNB for one caused a major reaction in the CHF after they unexpectedly hiked by 50bp when everyone was expecting either a no change or at best a 25bp hike. That was a big surprise for me last week. The other big surprise was the inaction from the BoJ, despite reports it was struggling to control yields. But it put that story to bed.  The CHF/JPY therefore is among the currency pairs to watch for continued appreciation, if you want to take the US dollar out of the equation. 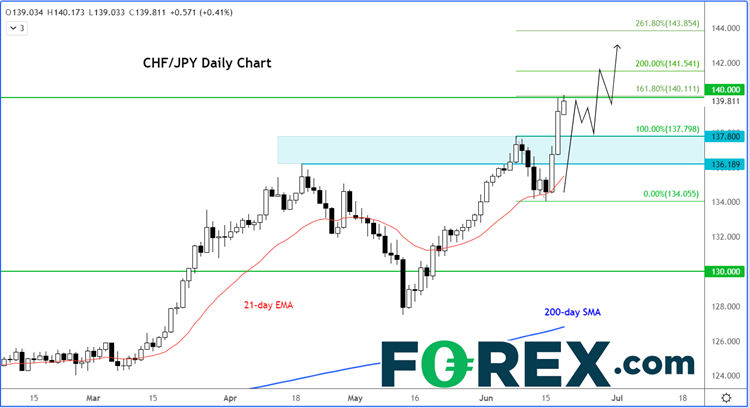