The headline US Non-Farm Payrolls (NFP) number for April came in on Friday at 160,000 jobs added vs prior consensus forecasts of around 200,000. The April number was down considerably from the unrevised 215,000 jobs added in the previous month of March. This very substantial disappointment in the employment picture rather accurately mirrors the ADP employment report that was released just two days earlier, which came in at 156,000 jobs added in April vs prior expectations also around 200,000. Despite both the unemployment rate and the change in average hourly earnings remaining steady and as-expected on Friday at 5.0% and +0.3%, respectively, the plunge in the actual number of NFP jobs added from prior months potentially foreshadows an even lower probability of further near-term rate hikes by an already-dovish Federal Reserve.

Prior to Friday’s disappointing NFP release, the Fed had remained steadfastly cautious with regard to further rate hikes. It asserted last week in its FOMC statement that while the labor market had seen improvements, other economic growth indications were slowing and the pace of further rate increases would likely be gradual. Now, with potential signs of a slowdown in employment growth as well, at least for the month of April, the Fed’s caution is likely to be even more warranted. This could especially be the case if further economic data in the run-up to the Fed’s June meeting continue to show relatively weak employment and economic growth.

In the immediate aftermath of the NFP, the initial market reaction to Friday’s employment release was a reasonable and expected sharp drop in the US dollar due to the sizable 40,000-job divergence between the actual and expected numbers. As frequently occurs during and shortly after important economic releases, however, the dollar then had a secondary reaction that quickly reversed those losses to resume trading by mid-morning on Friday in the general neighborhood of where it had been trading prior to the release.

From a slightly longer-term perspective and outlook, however, it is difficult to see any positive outcome for the US dollar from the latest employment release, especially with respect to the Fed’s monetary policy stance going forward. A consistently and increasingly dovish Fed driven by weaker economic data, including employment data, is very likely to have the continued effect of placing significant pressure on the US dollar as it has since early this year.

Following the release of Australian inflation data last week that came out surprisingly lower-than-expected, the Reserve Bank of Australia (RBA) on Tuesday cut interest rates by 25 basis points to a new record low of 1.75%. Prior to last week’s release of the inflation data, the RBA was not widely expected to cut interest rates, but since the Consumer Price Index showed prices falling by 0.2% vs. expectations of a 0.3% increase, speculation over a potential interest rate cut had increased markedly. After Tuesday’s actual rate cut, the RBA followed up on Friday with more dovish news during its monetary policy statement. The central bank cut its core inflation forecast to 1-2% for 2016, down from 2-3% in its prior quarterly statement. This provided some hint of further rate cuts to come. In light of these recent inflation-driven events contributing to further RBA dovishness, the Australian dollar has fallen significantly against other major currencies, as might have been expected. As of Friday, AUD/USD has been pressured down to key support around the 0.7350 level after having dropped below 0.7500 support earlier in the week in the wake of the RBA rate cut. In the process of this extended drop, price has also broken down below both its 50-day moving average and an uptrend line extending back to January’s multi-year lows near 0.6800. In the event of a further sustained breakdown below the noted 0.7350 support level, which would extend the recent two-week retreat from April’s 10-month high above 0.7800, the next major downside target is at the key 0.7200 support level followed by the 0.7000 psychological level. 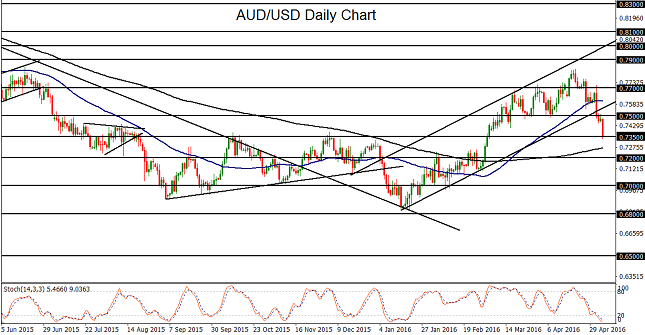 Despite a US dollar that has generally rebounded this past week, the persistent strength of the Japanese yen recently has kept USD/JPY depressed well under the key 108.00 support/resistance level. This extended yen strength follows the Bank of Japan’s (BoJ) decision last week to avoid further rate cuts and easing actions for the time being. While the risk of an intervention by the central bank in attempts to halt the strengthening of its currency continues to be present, the yen is likely to continue rising until such time that the BoJ actually makes a potential move. After having dropped below the noted 108.00 prior support level last week, the near-term bias for USD/JPY continues to be bearish, especially in light of both the upside momentum of the yen and weak employment numbers out of the US on Friday that could place some pressure on the dollar. In the event of continued downside for USD/JPY, the prevailing downtrend could well be extended towards the next major target at 105.00. In the absence of a successful BoJ intervention attempt, any further breakdown below 105.00 could potentially push the currency pair down towards 103.00 support, followed by the major 100.00 psychological level. 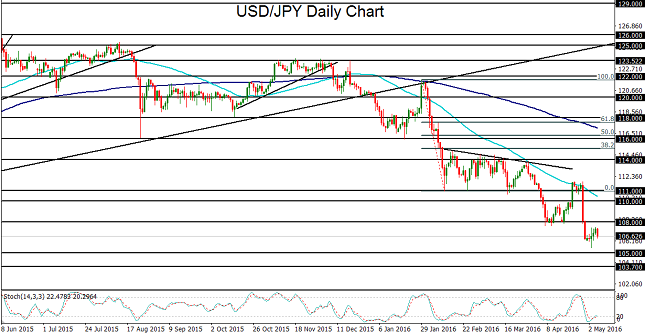 USD/CAD continued its sharp rebound on Friday as crude oil was still off its recent highs and the Canadian dollar was hit by data showing a much worse-than-expected employment change in Canada last month. For April, Canada lost 2,100 jobs vs prior expectations for a slight gain in jobs. The current rebound for USD/CAD has lifted the currency pair from major support around the 1.2500 level, where a new 10-month low was established earlier in the week. Supporting the rise for USD/CAD from its long-term lows, in addition to Friday’s disappointing Canadian employment numbers and recently lagging crude oil prices, was Canadian trade balance data for March that was released on Wednesday. It showed a merchandise trade deficit of -$3.4 billion, which far exceeded prior consensus expectations of -$1.2 billion and significantly widened the deficit from February’s revised -$2.5 billion figure. The sharp surge for USD/CAD prompted the currency pair earlier in the week to break out above previous resistance at 1.2800. With any further weakness in oil prices to add onto negative economic data out of Canada, the Canadian dollar could continue falling, potentially pushing USD/CAD to its next major resistance target at the 1.3000 psychological level. With any breakout above 1.3000, further bullish momentum could push the currency pair up towards 1.3400 resistance, which is also where the 200-day moving average is currently situated. In the event of such a rise, the sharp downtrend that has been in place for more than the past three months could be at risk of coming to an end. 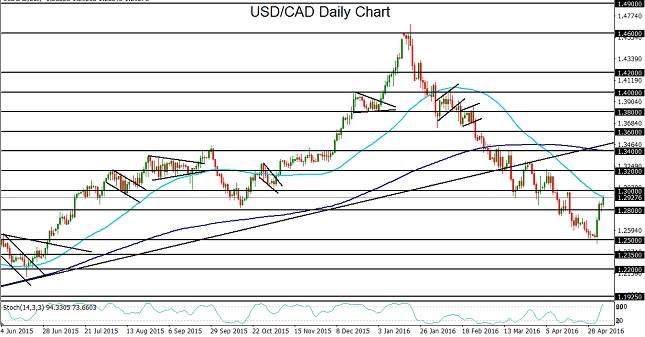