At the recent height of global market volatility last week, the yen had been rising at a swift clip due to accelerating asset flows towards the perceived safety of the Japanese currency.

At the same time, last week marked new long-term lows for the British pound against several other major currencies, including the euro, the US dollar, and the noted Japanese yen. Sterling had been dropping sharply within the past several weeks, partly due to speculation that the Bank of England’s intended rate hike might be postponed for significantly longer than expected as a result of low inflation and weak economic growth.

This combination of a volatility-driven surge for the yen along with a sinking pound prompted the GBP/JPY currency pair to plunge slightly below the 164.00 support level last week. This was its lowest level in nearly two years – since early February of 2014 – when GBP/JPY bounced off this same 164.00 support area.

The similar bounce off this level that occurred last week formed a "hammer candle," or "pin bar," pattern that generally gives an indication of intensified buying activity around oversold price levels, especially if it occurs near major support areas. After this pattern formed, GBP/JPY did indeed rebound in a relief rally as global stock markets stabilized late last week. That rebound reached a high above 170.00 before paring its gains.

Volatility in the equity markets returned on Monday, however, as global stock indices pulled back significantly from last week’s highs, along with another large drop in the price of crude oil.

Despite the noted hammer candle, jittery investors are still highly vulnerable to global market volatility, and the Japanese yen could continue to benefit further, pressuring currency pairs like GBP/JPY. Adding to this pressure is the steep downward spiral that the British pound has experienced and could continue to experience if the Bank of England remains as dovish as it has been recently. 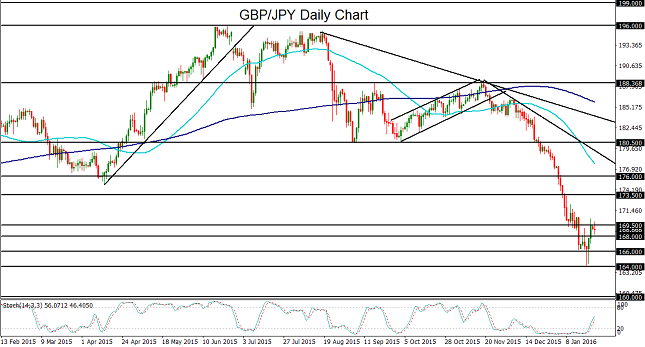