GBP/JPY dropped to touch a new multi-year low below 150.00 on Monday, hitting a level not seen since August of 2013. As might have been expected in the run-up to next week’s EU referendum in the UK, this drop has been largely fueled by unease over the near-future prospects of the British pound if a Brexit vote (a UK decision to leave the European Union) prevails. Further driving the pressure on GBP/JPY has been a general boost for the safe haven Japanese yen, partly also due to market jitters ahead of the upcoming referendum.

As noted, this heightened Brexit risk has placed increasing pressure on sterling recently while helping to boost traditional safe haven assets like gold and the Japanese yen. This combination of a weakened pound and surging yen has accelerated GBP/JPY’s fall towards and below the key 150.00 psychological level. This drop extends the currency pair’s long-term downtrend that has been in place for the past year.

While the directional bias for GBP/JPY in the aftermath of next week’s EU referendum will be largely dependent on the actual outcome of the vote, the currency pair could continue to fall in the run-up to the referendum as volatility and uncertainty continue to weigh heavily on the markets. In the event of further trading below 150.00, the next major downside targets are at the 147.50 and then 145.00 support levels. 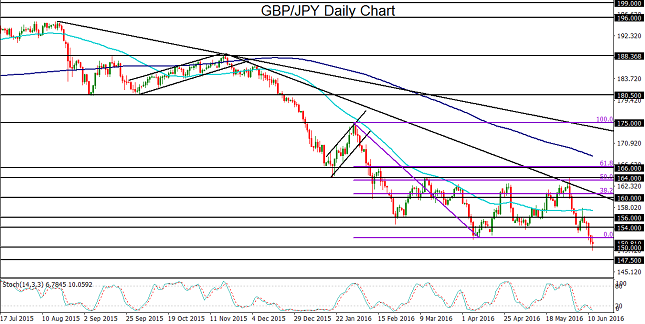