The GBP/USD slumped by more 250 pips today, before bouncing off its lows at the time of writing. The slide was more of a dollar-rebound story rather than about the pound, although the cable was among the weakest of the majors. This points to inherent weakness for the pound as the post-BoE rally fades and investors question whether the BoE’s simultaneous hiking and temporary bond buying is going to be effective in keeping the pound afloat. Still, the impressive recovery from a record low means the worst of the selling could be behind us.

It wasn’t just the pound that sold off today. We saw big falls in major indices, silver and the like, before everything bounced from their worst levels after Europe closed. In other words, today’s market action has been what we have become accustomed to in the past year: lots of volatility.

Today’s price action has also been the reverse of the trend we saw at the start of the week when everything rallied hard on the back of speculation the Fed might ease off the rate hikes.

However, a couple of Fed officials have come out and dismissed those talks, while today’s stronger ISM PMI report, plus the OPEC’s big output cut (which is boosting oil prices and is thus inflationary) certainly argues for higher interest rates for longer. Consequently, we have seen stocks get sold again, along with gold, silver and foreign currencies – not least the pound.

As we have mentioned before, the BoE is pressing the brake and accelerator at the time. This argues against a strong pound recovery in what is a bearish macro environment in the UK. The BoE’s objective is first and foremost to restore orderly market conditions. While the UK bond market may have calmed down due to the actions of the BoE, expect to see continued volatility in the beleaguered currency.

Today’s reversal in the GBP/USD means we have an uncompleted bearish engulfing candle on the daily time frame, after the rally ran out of steam around the 1.15 handle and the March 2020 low of 1.1410ish. If the GBP/USD closes today’s session below Tuesday’s low of 1.1280, then the engulfing candle will be confirmed. As a result, we will likely see downside follow-through in the days ahead. There’s no obvious support below here until the 1.10 handle, with 1.0915 also an important level to watch should we get there.

On the upside, if price holds above 1.1280, then a revisit of the March 2020 low of 1.1410 could be on the cards. The post-BoE V-shaped recovery certainly provides some hope that the worst of the selling may be over. 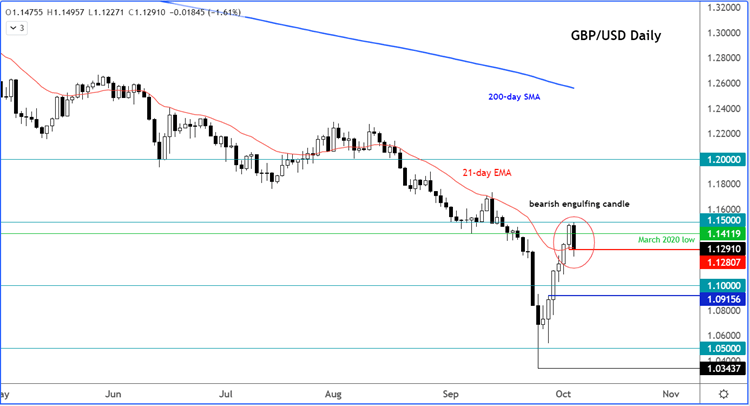 Latest Research
Two trades to watch: DAX, USD/JPY
Flash PMI’s and US inflation on tap
OK Fed followers: When is a pivot, not a pivot?
Powell's Brooking Institute speech is a dovish version of his November 2nd FOMC press conference
USD/CAD holds between key levels ahead of Powell speech
OPEC+ preview: Will OPEC+ cut production again?

Flash PMI’s and US inflation on tap
By:
Matt Simpson