GBP/USD rallies to key resistance ahead of US retail sales

The pound has been on a tear today, rising across the board. The GBP/JPY has led the advance, thanks to ongoing “risk-on” rally undermining the Japanese yen. The GBP/USD is also up sharply and is the pair to watch ahead of today’s publication of US August retail sales and the Federal Reserve rate decision next week.

Sentiment has turned positive towards the pound in recent days as investors price out the risks of the UK crashing out of the EU without a deal, after a bill became law that forces the government to seek an extension beyond October 31 deadline in order to avoid a no-deal Brexit. It remains to be seen however whether the pound will be able to reclaim further lost ground, given the current state of British politics and uncertain times over the coming months.

Today, US retail sales has the potential to move the dollar, which in turn could impact the GBP/USD exchange rate should we get a sizeable deviation from the expected readings. Headline retail sales are seen rising 0.2% month-over-month following a 0.7% jump the month before. Core sales are expected to come in at +0.1% after a +1.0% print in July.

Form a technical point of view, the current price structure on the cable is that of a reversal profile following that false breakdown attempt below the 1.20 handle earlier this month. Since then, the bears have been getting trapped as rates squeezed higher. But now we have arrived at an inflection point near the 1.25 handle.

At 1.2475, the GBP/USD was testing the low from last year, at the time of this wiring. Once support, this level has the potential to turn into major resistance. Slightly above the psychologically-important 1.25 handle we have the 38.2% Fibonacci retracement level against last year’s high. Given the convergence of these technical factors, there is a chance for a pullback of some sort here.

In terms of the next key support, the area between 1.2365 and 1.2385 was the most recent resistance range to keep an eye on. Now that we have broken above it, the bulls will need to defend this zone upon a potential re-test. However, in the event price breaks back below this zone, then this would flip the bias back to the bearish side. Specifically, a break below 1.2285 is required to completely invalidate the bullish bias.

Meanwhile, in the event that the GBP/USD eventually clears and holds above the 1.25 handle, then in that case we could see the rally extend towards the 50% retracement level at 1.2670 or even the 200-day moving average around the 1.2735 area. 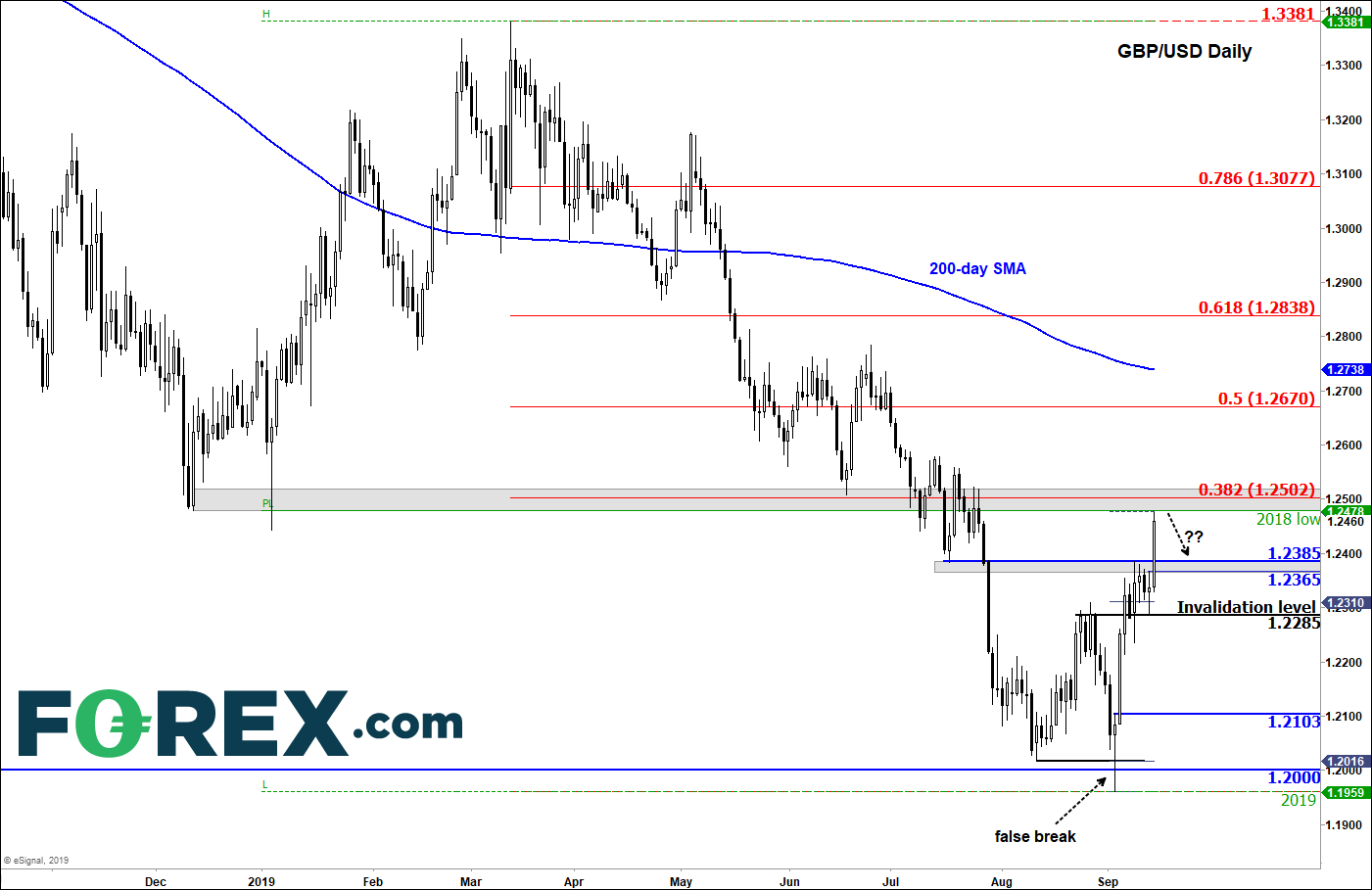