So, Liz Truss will become the new UK prime minister on Tuesday after defeating Rishi Sunak in the Tory leadership contest today. The result was closer than many people had expected, with Truss taking 57% of votes cast. The markets hardly reacted to the news, not least because the outcome was expected.

While we now know who the new PM will be, the economy will still face significant challenges with several quarters of negative growth upon us amid the energy crisis and soaring inflation. Will the market put its trust on Truss to deliver the goods the economy badly needs?

Truss pledged to deliver a "bold plan" to tackle soaring energy costs and is understood to be considering a freeze on energy bills. But this will by no means be a walk in the park for Truss. She will have to keep a tight fiscal line while trying to tackle the energy and cost-of-living crisis. Truss’s supposed £100bn scheme to limit energy price rises might provide some relief in the short-term, but someone will have to pay for it. Unfortunately, it will be the taxpayers.

Some of Truss’s many other challenges include sorting out the NHS after being crippled by the pandemic and repairing the UK’s relationship with the EU, damaged by Brexit.

I suppose the good news is the UK economy is at a rock bottom and things can hopefully improve from here. The same could be said about the pound, with the cable sitting at 1.15 handle, around 100 pips above the low it had hit at the height of the pandemic in 2020. Will traders push the cable over the edge in the next few days? Given how far it has already fallen, I wouldn’t rule anything anymore. But rates are significantly ‘oversold’ so a bit of a consolidation should not come as surprise. 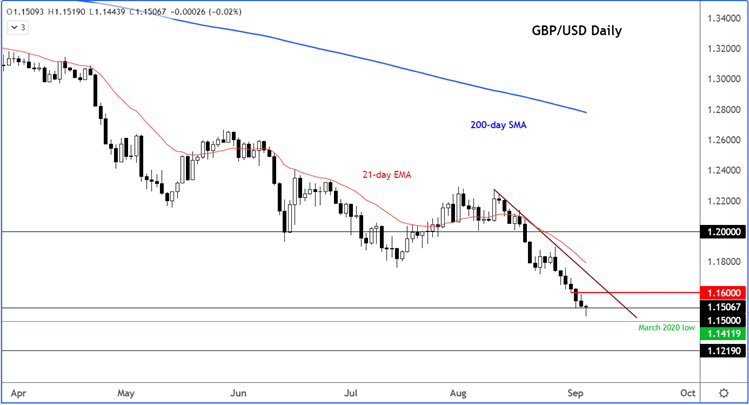