Following Tuesday’s sharp rebound in US dollar – most notably against the yen – and bond yields, investors will be watching the markets closely to see if there will be any follow through in that move. This puts gold into a sharp focus, especially after it retreated from a key technical area. But was it just a blip in the new trend, or something more meaningful?

There are three main focal points for FX and gold traders today:

Gold and US government bonds gave up their earlier gains on Tuesday as yields jumped after Federal Reserve Bank of St. Louis President James Bullard provided no indication of any slowdown in the Fed's fight on inflation, despite data showing the US economy is in a recession.

Bullard said he believed the rate path is more data-dependent than it has been to now, but that the Fed must move into more restrictive rate territory. He added that if inflation hangs up higher then the central bank will have to have higher rates for longer.

Around the same time, pressure on risk was mounting as Nancy Pelosi’s plane was approaching Taiwan with investors growing concerned about some retaliation from China. But as soon as Palosi’s plane landed, there was a release of pressure as bonds got sold and stocks bought.

Bullard’s hawkish comments and the squaring of bearish bets ahead of Pelosi’s arrival in Taiwan both helped to send bonds slumping, causing the yield on the benchmark 10-year Treasury to climb to THIS pivotal level ahead of today’s macro events: 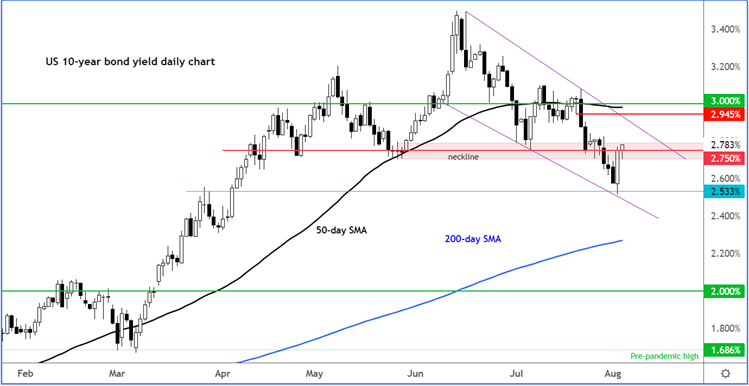 Interestingly, the rebound in the 10-year US bond yield has come just a few days after breaking the neckline of its H&S support, when the Fed President Jay Powell appeared to give the indication that rate hikes will slow down amid concerns about growth and peak inflation. If we see the neckline reclaimed decisively, then that should put pressure on gold more meaningfully. For now, it is treated as just a rebound in what has turned into a short-term bearish trend since mid-June.

Let’s see if today’s US data or Fed speeches will cause more volatility in bond – and, in turn, gold – prices.

Gold has followed the script quite accurately from a technical viewpoint. We have been calling for gold to rally to at least $1850 in our recent posts, and lo behold it got there on Tuesday, before retreating sharply – in part because of profit taking. Here it has created a possible reversal signal in the form an inverted hammer candle. But so far, there has been no downside follow-through, which I suppose is a positive sign from a bullish point of view. 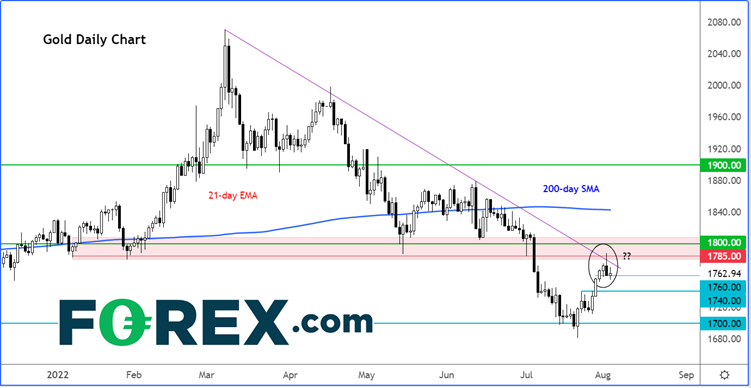 If it goes on to break above Tuesday’s high, then this will probably trigger a sharp follow-up rally as it would point to the bears being trapped. However, if Tuesday’s low breaks first and there’s acceptance below it then $1740 could be the next stop.

What happens next will now depend on the direction of bond yields and US dollar. Both have been in a general bear trend of late, but if either starts to rise noticeably again, then this may see gold at least pause for a breather or worse go in a complete reversal. As technical traders and analysts, we will let the market decide on the direction and act accordingly. If you are not already long, it may be best to now wait for the market to provide us with fresh bullish signals.

Once today’s release of US services PMI is out of the way, gold traders will then look forward to Friday’s publication of US non-farm payrolls report. US jobs reports have not been having the same impact on the markets because the focus has been on inflation and the economy. But if we start to see weakness in employment again, then this will further worry investors about the health of the world’s largest economy and provide gold some support.