After the FOMC minutes release, my colleague Matt Weller wrote a piece on how Gold (XAU/USD) has been moving higher based on the overall macro landscape, i.e. high inflation and rate hiking environment.  However, the moves in Gold today appears to be more tied to the Russian conflict with Ukraine rather than with the longer-term macro landscape.

The headlines were rampant overnight, beginning with Russian claims that Ukrainian forces fired on them. Ukraine’s defense ministry later said that shelling from Pro-Russian forces stopped at 1:00PM local time.

Jabs continued as the US got out of bed, with the US citing that Russia is moving toward an “imminent invasion”, as forces have been seen inching closer to the Ukrainian border and stocking up on blood.

Russian turned up the heat as they ousted the US Deputy Ambassador and responded to the US counterproposals.  Russia said that the growing US and NATO military activity is alarming, and that Russia’s red lines are being ignored. They also said that Russia will be forced to respond, including by implementing military technical measures, in the absence of the US to negotiate legally binding guarantees.

Gold has been a beneficiary of the uncertainty surrounding the situation between Russia and Ukraine.  On February 11th, the yellow metal broke above a long-term symmetrical triangle it has been in since early in the pandemic.  Gold held the resistance at the prior highs of November 16th, 2021 near 1877.16, only to break above it today. There is a strong confluence of resistance just above at the 127.2% Fibonacci extension from the November 16th highs to the low on December 15th 2021, previous highs from June 1st, 2021, and the 61.8% Fibonacci retracement level from the all-time highs in August 2020 to the lows in March 2021. This resistance is between 1911 and 1923.  Above there price can move to the 161.8% Fibonacci extension from the most recent timeframe and horizontal resistance between 1953.66 and 1959.34. 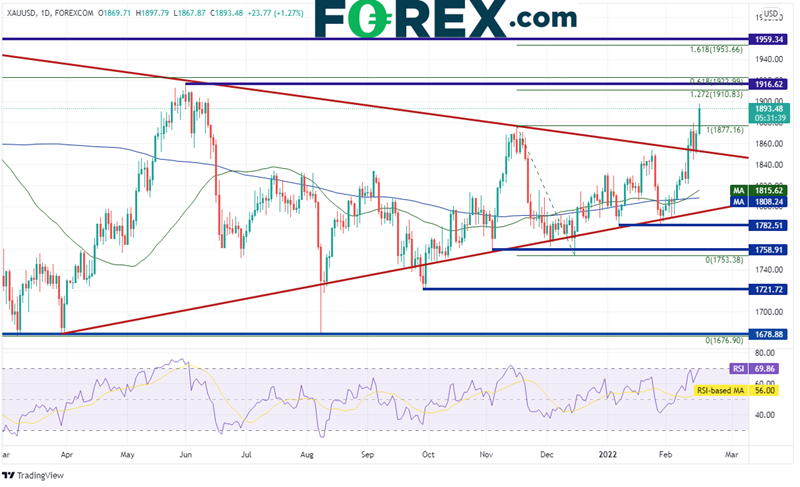 First support is at the previous highs near 1877.16.  Below there, price can fall back to the top downward sloping trendline of the long-term triangle near and the February 15th lows near 1844.61.  The next level of support isn’t until the 50-Day Moving Average at 1815.62 (see daily). 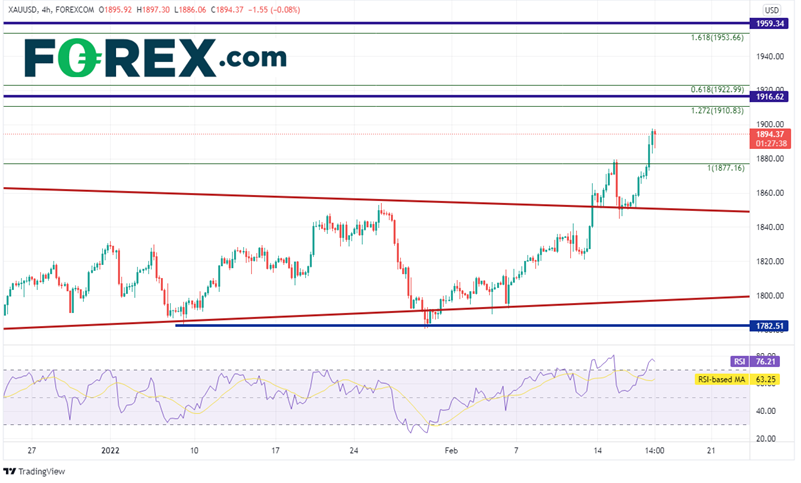 The sporadic headlines coming out of the markets this morning have caused a good deal of uncertainty around the Russia/Ukraine situation.  Expect the headlines to continue.  Markets strongly dislike uncertainty and therefore, Gold has moved higher.  However, that can all change when the next headline hits the wires.  Traders should be cautious during uncertain events and use proper risk management.