By :
Global Author
The price of gold extended its rebound modestly on Thursday after the US Federal Reserve provided some key signals on Wednesday that, despite a considerable probability of one Fed rate hike by the end of this year, the pace of any further rate hikes going forward will likely be even slower and more gradual than previously forecast.

The Fed’s newly-updated September “dot plot”, which was revealed on Wednesday, is used to describe Fed officials’ current projections for interest rates by the end of the year, in the next few years, and in the longer run. While the pace of projected interest rate increases as shown on June's dot plot was already seen to be gradual, September's forward projections were, on balance, substantially even more gradual over all time frames. While Wednesday’s FOMC statement and press conference may have been seen by some to skew towards the hawkish side, especially with the statement’s verbiage that "the case for an increase in the federal funds rate has strengthened," the increasingly dovish-leaning dot plot made a strong case for a “lower-for-longer” interest rate outlook.

One of the chief beneficiaries of such an outlook is gold, a non-interest-bearing asset whose shine is generally tarnished when yields are higher. Despite the fact that the Fed currently appears fairly likely to raise interest rates in December, even if partly just to help salvage its damaged credibility, the increasingly dovish outlook for projected future rate hikes has helped to prop up gold and depress the US dollar in the aftermath of Wednesday’s FOMC statement.

As a result of this boost for gold, price action has made some clear technical moves. Gold’s rebound after the Fed statement prompted a rise from a major rising trend line that extends back from the $1050-area multi-year lows of late last year. As of Thursday, the rebound has boosted gold up to touch key resistance at a descending trend line that extends back from July’s $1375-area highs. This descending trend line has been tested and respected three times since those highs, and has held strong each time thus far, forming a succession of lower highs in a sustained pullback.

Having just climbed up to hit this trend line once again as of Thursday, the price of gold has reached a critical technical juncture. In the event of any sustained rise that breaks out above the trend line on a continued dovish interest rate environment and weaker US dollar, the next major short-term targets to the upside are at the $1350 and $1375 resistance areas. 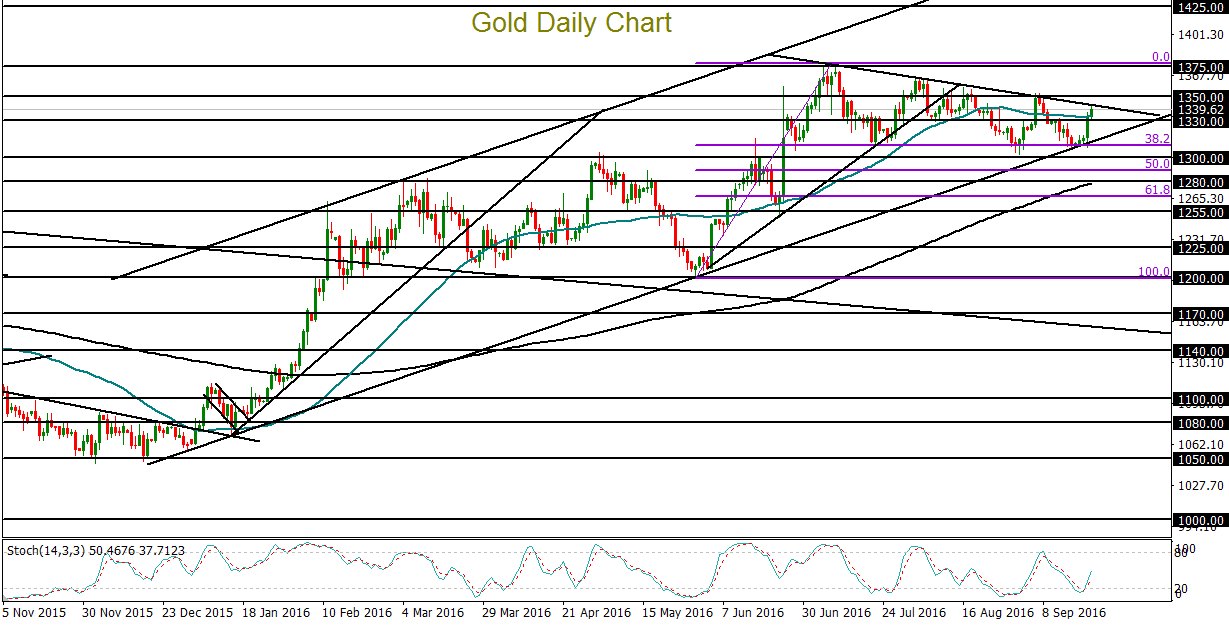