Ahead of the all-important US jobs report in the afternoon, gold has started the new quarter fairly quietly today after ending the last one 16 per cent better off. It was the best quarter for gold in nearly 30 years, helped by a depreciating US dollar and increased volatility in the equity markets. But as equities rallied in March, the safe haven gold struggled to push further higher even as the dollar weakened. All the same, it didn’t really drop off a cliff. In fact, the consolidation near the highs is a bullish sign; all it needs now is a gentle push to trigger further momentum buying interest. This may well come from a significantly weaker US jobs report today, which, if seen, would undoubtedly weigh on the US dollar and may trigger the "risk off" switch among the equity market investors. In contrast, a significantly stronger jobs report would put a June rate hike firmly back on the table. Although this outcome would probably not be good news for the stock markets, it would almost certainly lead to a sharp rally in the dollar and thus exert pressure on some buck-denominated assets like gold and silver in the short term.  The best outcome for stocks therefore is if the report shows solid readings but not strong enough to materially change the market’s views about the path of interest rates in the US. For gold, the best outcome would be if the both the dollar and stocks weakens further, regardless of the data. Stocks were already on Friday with Japan closing 3.5 per cent lower overnight and European stock indices being down between 1.3 and 2.0 per cent at the time of this writing.

As mentioned, gold’s consolidation near the recent range highs may be a bullish sign. After all, this has allowed the momentum indicators such as the RSI to unwind from "overbought" levels without significant depreciation of the underlying gold price. The precious metal may now be gearing up for another rally, but at the moment it is stuck inside what appears to be a bull flag continuation pattern. The RSI is correspondingly held down by a falling trend line. If gold breaks through the resistance trend of the flag, it will still need to form a new high above short-term resistance around $1243 to potentially trigger some breakout buy orders. Further short-term resistance is seen around $1263, followed by the March high at $1283ish. A decisive break above the latter would obviously be a very bullish outcome.

However, while gold remains contained with the channel, there is a danger it may fallen even more in the short-term before potentially staging another rally. Traders should watch the rising 50-day moving average, at around $1210, closely for gold could find support there, especially since the previous low was also formed around this level, specifically at just below $1209. But if the potential sell-off does not stall here, then there is little further support seen until the psychologically-important $1200 mark, followed by the previous resistance-tuned-support around the $1190-$1193 area, where we also have the 38.2% Fibonacci retracement level converging. A break below $1190 would expose the 200-day moving average and 61.8% retracement for a test, at $1137/8 area.

So, to recap then, gold is still looking bullish although there is a risk it could pullback further in the short term, especially if today’s US jobs data causes the dollar and equities to rally. Traders may therefore wish to wait for gold to make its move post the jobs report before taking a view on it. 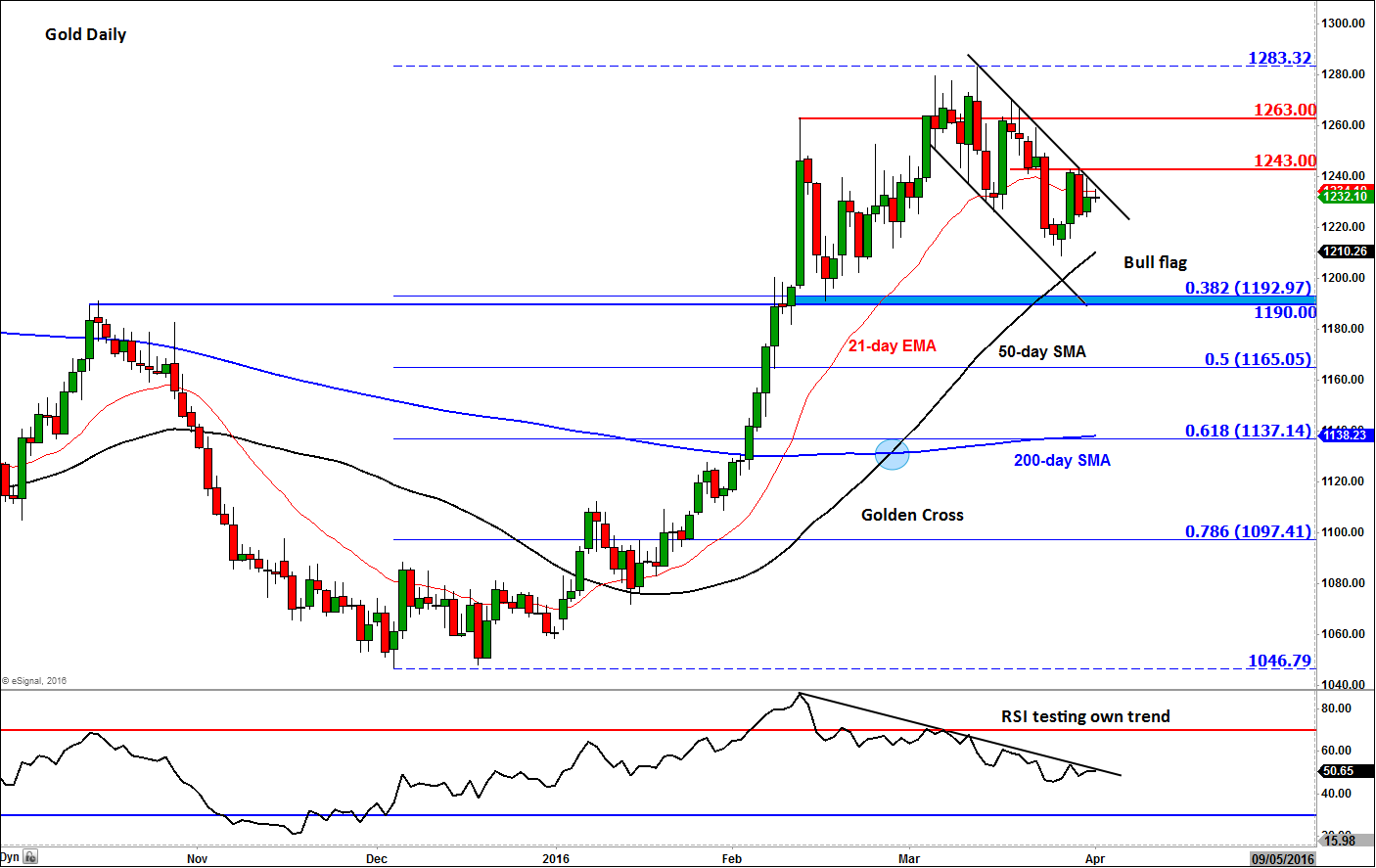