After silver’s big plunge on Monday, both precious metals have managed to steady the ship, suggesting the move at the start of the week was probably a bear trap.

The US dollar has come back against the Canadian dollar thanks to a 25-basis point rate hike from the Bank of Canada, with its governor saying that interest rates will be kept at its current level while the bank assesses the impact of the cumulative interest rate increases.

But elsewhere, the likes of the pound, euro and yen all remain supported against the US dollar. This is helping to keep buck-denominated metals supported.

Investors are growing confident that more central banks will be pausing their interest rate hikes soon, as more signs emerge than global inflation is slowing – although the outlook remains uncertain and there have been some surprises here and there (and Down Under overnight).

So, gold remains supported on the view that the days of rate hikes are numbered, but given the impressive gains over past two and a half months, some would argue that much of the positive news is now priced in.

However, the trend remains bullish and until we see a key reversal pattern in the gold or silver charts, fading the dips continues to remain the dominant strategy.

Gold has found support around $1920, a level which had served as resistance in the past. For as long as it doesn’t break the structure of higher lows and higher highs, the path of least resistance remains to the upside and a run towards $2,000 cannot be ruled out as a result.

The most recent low comes in at $1896. In the short-term, this will be the line in the sand. 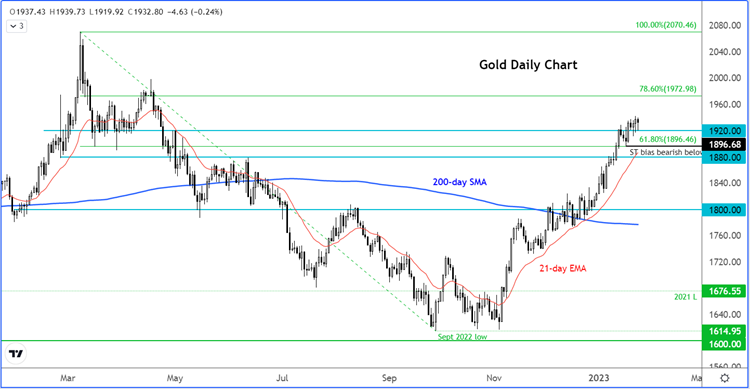