Gold still not out of woods

At the time of writing gold was higher on the day thanks to weakness in US dollar, in what has been a rather quiet week so far. Despite its recent sharp recovery, question marks remain as to whether gold will be able to rise significantly from here.

Although the case for peak inflation has grown, the fact that interest rate increases are not yet pausing in the US and elsewhere means holding gold is still an opportunity cost for foregoing fixed interest you would earn by holding government debt.

Among the Fed officials who have spoken in recent days, their message has all been similar – i.e., that their fight against inflation continues and more rate increases are on the way. St. Louis Fed President James Bullard said interest rates need to rise further to a 5%-7% range. San Francisco Fed President Mary Daly said a pause in rate hikes was “off the table.”

So, Fed speakers suggest that rate hikes could slow, but they are likely to continue for longer, which may mean a higher peak fed fund rate anyway. Cleveland Federal Reserve Bank Loretta Mester will be speaking at 16:00 GMT. Apart from Richmond Manufacturing Index, due at 15:00 GMT, there are no high-impacting US economic data today.

The hawkish Fed talk has been offset by reports that China has been buying the dollar to reduce dependence on the dollar, leaving gold in no-man’s land from a technical point of view, much like most other risk assets.

After running into some resistance around the long-term pivotal area between $1780 to $1800 last week (red shaded area), gold has now reached – and bounced – from the upper side of short-term support range between $1722 to $1735 area (blue shaded region on the chart). What it does next will depend on which direction the next break will be. At the time of writing, gold was testing a short-term term resistance level at just shy of $1750. 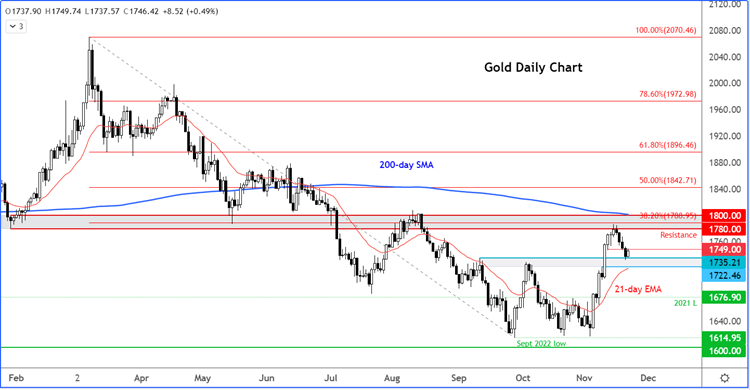