Gold still vulnerable as attention turns to US data

After the slide on Monday, gold has been fairly stable around $1665ish over the last day and a half.  But that doesn’t mean it is out of the woods, because it is far from looking bullish. If anything, more losses could be on the way.

Gold’s hesitation comes on the back of renewed weakness since the middle of last week, which ended a two-week winning tun. The recent falls have been in response to a stronger US jobs report which helped to end talks about the Fed potentially pivoting to a slightly more dovish stance.

The dollar remains supported on the dips, which is why investors are continually discouraged from holding onto gold, even at these lower levels.

Gold has also been undermined by the latest breakout in bond yields. The US 10-year yield hit 4% before dropping back somewhat sharply in the second half of Tuesday’s session. This morning bond futures have fallen again, which is pushing yields higher - putting gold under the spotlight again.

US data in focus for gold investors

Attention turns to US data after even more hawkish commentary from the Fed overnight with Mester saying the central bank still had a lot of work to do to bring inflation down and that a more restrictive policy was needed.

Up next, US PPI inflation will be in focus, which is expected to have eased in September, albeit very slightly, to an annual rate of 8.4% from 8.6% y/y in August.

Then, at 19:00 BST, minutes from the September FOMC will be released. The Fed hiked rates by 75 basis points at the meeting. The minutes are expected to reiterate the Fed’s hawkish stance, but unlikely to move markets too much as several officials have since spoken (hawkishly).

The big data release is going to be on Thursday when CPI is published. Consumer inflation has fallen very slightly in the last couple of months and another print lower would be a welcome sign. However, for the dollar to weaken we will need to see a big drop below expectations.

But if the upcoming US data helps to push yields even higher this week, then surely that could see gold go in the opposite direction and reach for the September low at just below $1615.

At the time of writing gold was higher on the session but looked vulnerable to further falls after the bears managed to drive prices back below the low of 2021 around $1676. 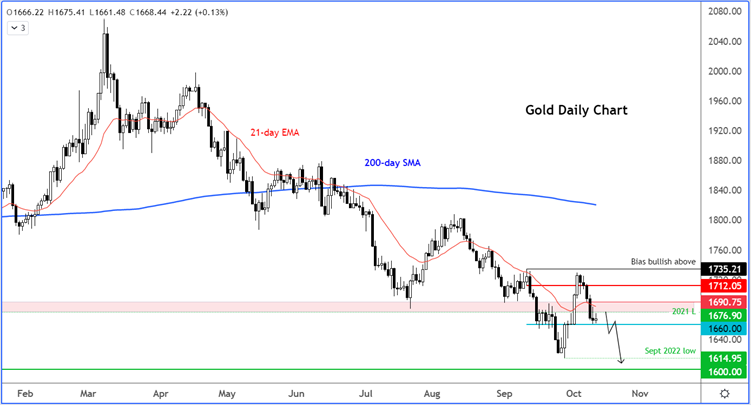 So, the path of least resistance remains to the downside for gold, although prices do seem a little oversold in the short-term. I expect any bounces to be sold into as long as there’s no change in the current macro settings.