How the Presidential Election Affects the US Economy and Gold

1) The US Economy and The Election: A Broad Look

When it comes to the relationship between the economy and US presidential elections, causality flows both ways. Stated differently, the strength of the economy has a major impact on which party is elected (in the words of Bill Clinton’s successful ’92 campaign against George H. W. Bush, “It’s the economy, stupid”), but the economy also tends to perform better in election years regardless. As Nordea recently found, US GDP has historically risen by 0.3% more in election years than other years since 1948, partially on the back of expanded fiscal policy as incumbent politicians seek to “buy” their way to reelection: 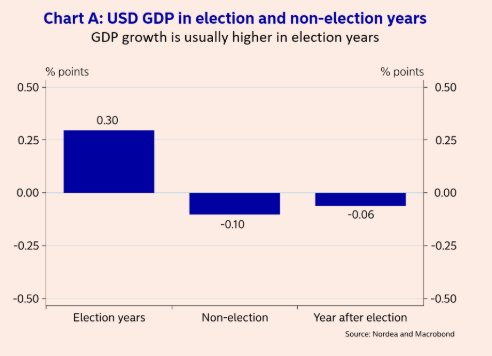 While knowledge about long-term tendencies can be useful, it’s also critical to acknowledge that this election, featuring an unconventional president, an unprecedented pandemic, and the resulting global recession, may not follow that historical playbook. Indeed, the elevated unemployment rate, which is unlikely to meaningfully decline by Election Day, is a major factor working against President Trump. Indeed, Forbes found that the incumbent candidate has won every election when the unemployment rate was stable or falling, and lost every election when the unemployment was rising over the last 50 years.

Regardless of how you look at it, the state of the economy will have a major impact on this Autumn’s highly anticipated election.

2) The Election: Will Metals Shine Bright?

Generally speaking, precious metals like gold and silver tend to benefit from low / negative real interest rates and geopolitical uncertainty, characteristics that describe elections generally and this year’s in particular. In that light, it’s not surprising that gold recently hit a record nominal high above $2000, while silver has more than doubled off its March lows.

More broadly, the price action in gold and silver has seen consistent patterns in the months around US elections. Historically, gold has tended to rally in September of election years (perhaps on the back of fiscal stimulus and political uncertainty) before reversing to trade lower through the Presidential inauguration the following January. That said, gold and silver fared well the last time a Republican was up for re-election in 2004, kicking off a bull market that ultimately culminated in gold’s previous record high near $2000. The upshot of this analysis is that traders should avoid becoming too focused on any one scenario and maintain flexibility to adapt to market conditions and trends.

Heading into the 2020 election, both major candidates are promoting major stimulus plans, whether they’re couched in terms of President Trump’s proposed infrastructure and tax cut plans or elements of Biden’s watered-down “Green New Deal.” Against that backdrop, it’s no surprise that hard assets like gold and silver have been seeing a sharp rally, but for the gains to extend beyond the election, traders will need to see evidence that those ambitious plans are likely to be enacted.

3) As people head to the polls, what about your portfolio?

As we noted above, US economic performance will depend heavily on the outcome of November’s election…which will in turn be influenced by the state of the economy itself! Research shows that the more optimistic people are about economic conditions, the more likely they are to turn out to vote. In fact, studies have found that the population’s economic optimism is one of the key factors that determines voter turnout.

With the US economy navigating a deep (though hopefully short!) recession as we go to press, there’s a risk that turnout may be subdued, especially for Republicans discouraged by the current state of affairs. However, there’s still time for the US economy to turn the proverbial corner if the virus can be brought under control, in line with historical election-year trends. One way or another, traders and voters alike will be keeping a close eye on the performance of the US economy before and after one of the most highly-anticipated elections in recent memory.