NFP preview: Will Powell get the jobs slowdown he wants?

Following Wednesday’s FOMC meeting, it's clear that Jerome Powell and company are still far more concerned about the “price stability” half of their dual mandate than the “full employment” half. Nonetheless, the central bank remains data dependent, so this month’s jobs report will play into the central bank’s interest rate decision at the upcoming December meeting.

With two NFP reports and another CPI reading scheduled before the Fed’s next interest rate decision in mid-December, it’s not surprising that traders are uncertain about what the central bank will do. According to the CME’s FedWatch tool, traders are split 50/50 between expecting another 75bps rate hike and a downshift to 50bps, so we’re likely to see some market volatility regardless of how this month’s jobs report prints. For the October NFP report, consensus expectations are for 205K net new jobs and average hourly earnings projected to rise by 0.3% month-over-month: 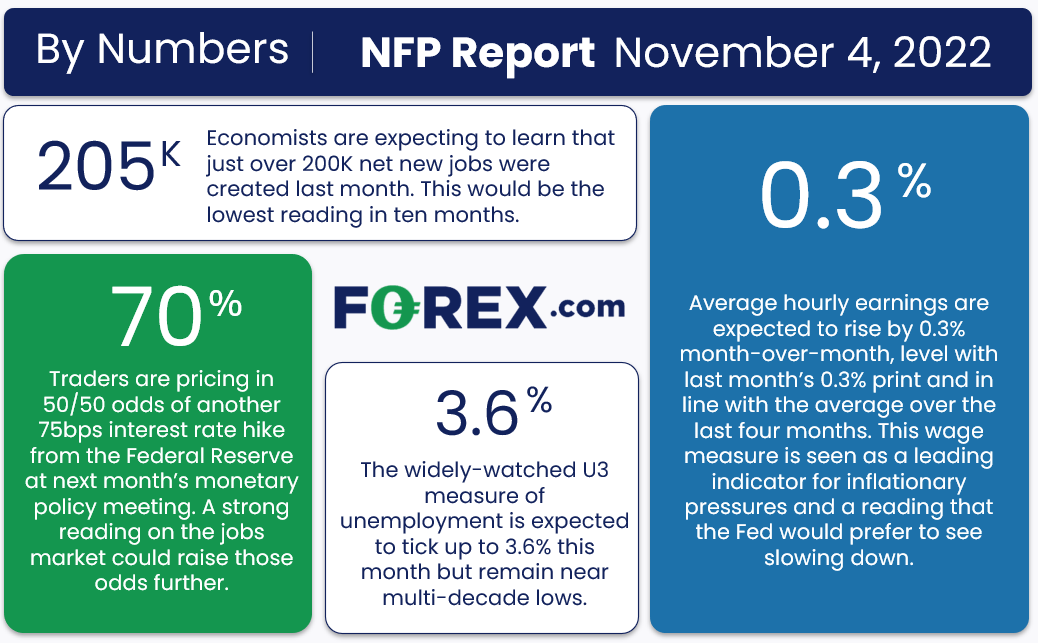 As a reminder, the state of the US labor market remains more uncertain and volatile than usual as it emerges from the unprecedented disruption of the COVID pandemic. That said, weighing the data and our internal models, the leading indicators point to a slightly stronger-than-expected reading in this month’s NFP report, with headline job growth potentially coming in somewhere in the 175-275K range, albeit with a bigger band of uncertainty than ever given the current global backdrop.

The US dollar index has spent the last month consolidating between 109.50 and 113.50 as traders evaluate the state of the global economy and whether the Federal Reserve will be more aggressive in raising interest rates than its major rivals. The consolidative price action doesn’t leave a strong technical bias for the world’s reserve currency, so if you’re trading the NFP report, it will be crucial to pick the right pair.

As for potential trade setups, readers may want to consider sell opportunities on EUR/USD on a strong NFP reading. The world’s most-widely traded currency pair has turned lower after a false break above parity (1.00) last week and broken a near-term bullish trend line, opening the door for more downside toward the October lows in the mid-0.9600s or even the two-decade lows in the mid-0.9500s if the US labor market surprises to the upside.

On the other hand, a soft jobs report could present a short-term sell opportunity in USD/CAD. While the broader trend favors the greenback, USD/CAD is currently holding below the September and October highs and could form a potential head-and-shoulders top pattern if it rolls over on the back of a slowing jobs report in the US.