NFP Preview: Will Unemployment Break Back Below 10%?

Seven months on from the initial US shutdowns, portions of the US labor market have returned to normal, especially for “white collar” employees who are able to work from home. In contrast, other areas of the labor market, including the hospitality, tourism, and restaurant sectors, remain deeply scarred. Throwing another spanner in the works, the massive fiscal stimulus from earlier in the year (highlighted by $600 in additional unemployment benefits) has worn off, and Congress has not yet reached an agreement on a new bill.

Such is the bifurcated state of affairs as traders look ahead to Friday’s always highly-anticipated Non-Farm Payrolls (NFP) report. As it stands, economists expect that it will show roughly 1.4M net new jobs, with wages flat on a month-over-month basis and unemployment expected to drop back below 10.0% for the first time since April. 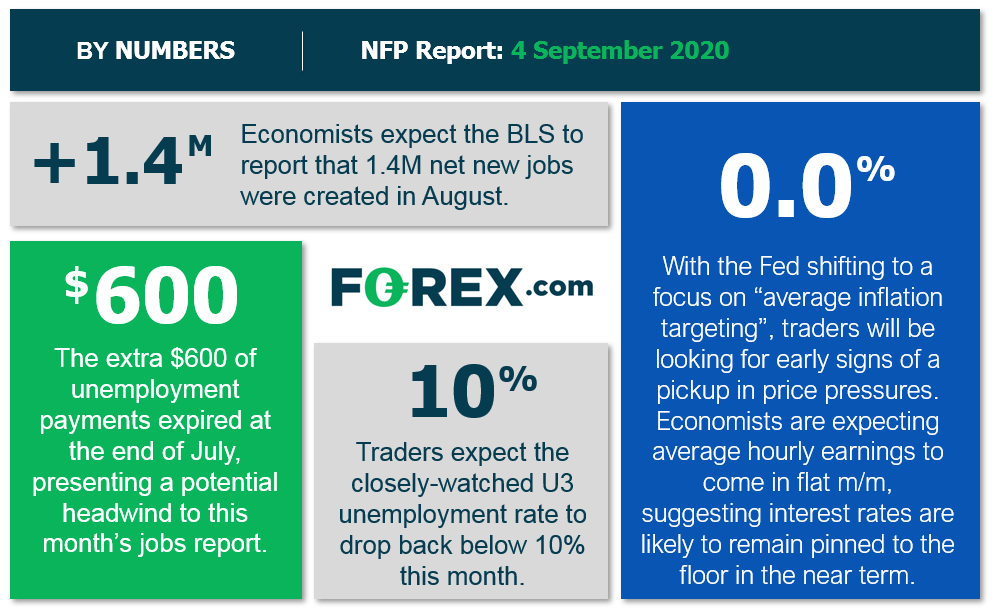 As we’ve noted repeatedly over the last few months, traders should take any forward-looking economic estimates with a massive grain of salt given the truly unparalleled global economic disruption as a result of COVID-19’s spread. That said, weighing the data and our internal models, the leading indicators point to a potentially worse-than-expected reading from the August NFP report, with headline job growth potentially rising by “just” 700k-1M jobs, though with a bigger band of uncertainty than ever given the current state of affairs

When it comes to the FX market, the elephant in the room is the US dollar. The greenback remains in the midst of a sharp downtrend against all of its major rivals, with the US dollar index recently dipping below 92.00 to its lowest level in over two years.

That said, selling pressure on the buck has moderated over the last couple weeks, and the world’s reserve currency may therefore see a countertrend rally if there’s any positive developments in this month’s jobs report. In particular, if we see stronger than expected jobs growth and wage figures, it could set up EUR/USD for a deeper retracement of the July rally back toward the 1.1700 zone, where the 50-day EMA comes in. Meanwhile, a weaker-than-anticipated NFP reading could create a sell opportunity in USD/JPY, which is not nearly as stretched as many of the other major currency pairs.