Norway’s Norges Bank left rates unchanged at 2.75% during its January meeting, as expected.  However, Governor Wolden noted that the policy rate will most likely be raised in March.

Inflation slowed in December to 5.9% YoY from 6.5% YoY in November. This was after peaking 2 months earlier at 7.5% YoY. However, the Core PCE upticked to 5.9% YoY from 5.8% YoY a month earlier.  PPI fell dramatically in December to 18.7% YoY after peaking earlier in 2022 near 80% YoY!  The committee felt like a pause was needed as “the future policy rate path will depend on economic developments”. In December, the central bank said that the terminal rate would be around 3% this year. Markets are pricing in 3.25%.

USD/NOK has been moving aggressively higher from March 31st, 2022 to September 28th, 2022 when price peaked at 11.0116. Since then, price has been moving lower in an orderly channel but was halted at support near 9.7876 in December.  The support included the 200 Day Moving Average, the bottom trendline of the channel and an upward sloping trendline from the lows of early June 2022.  As is often the case, when price fails to break below one side of a channel it moves to test the other side.  On January 3rd, price broke above the channel near 9.9987.  However, three days later, price made a high of 10.3106 and reversed.  USD/NOK is now consolidating around the 50 Day Moving Average, the 200 Day Moving Average, the top trendline of the channel, the long term upward sloping trendline from June 2022, and the 50% retracement from the March 31st lows to the September 28th highs, near 9.8900. 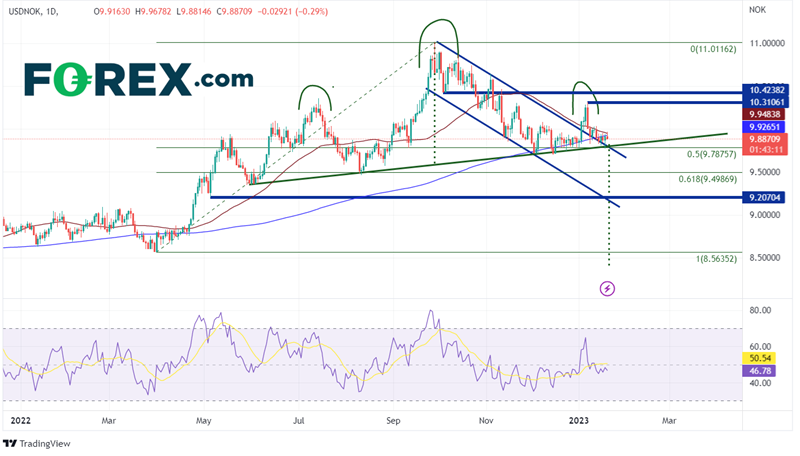 Notice that as USD/NOK moved from the March 31st, 2022 lows to today, price formed a head and shoulders formation, with the most recent breakout above the channel forming the right shoulder.  Price is currently sitting on a host of support, including the neckline of the pattern, near 9.7875. If USD/NOK breaks the trendline, price could be on its way towards the head and shoulders target near 8.3817.  However, it must first pass through additional support at the 61.8% Fibonacci retracement of the above-mentioned timeframe at 9.4987, then the bottom trendline of the channel near 9.1500/9.2000.  If price breaks below there, it can run to the March 31st, 2022 lows at 8.5635.  If the support does hold and price moves higher, the first resistance is at the highs of February 6th at 10.3106.  Above there is horizonal resistance at 10.4238 and then several levels of previous highs on its way to the September 28th high of 11.0116.

The Norges Bank left rates unchanged, however said that it expects to hike rates at the March meeting.  USD/NOK is currently at a key confluence of support levels, which if broken, target a big move lower towards the head and shoulders target of 8.3817. However, if the support holds, USD/NOK can move back towards the recent highs of 11.0116.