Crude oil’s fundamental outlook continues to improve: as well as the planned OPEC oil output cut, we have seen surprise inventory destocking in the US for five straight weeks now. In addition to the prospects of reduced supply, the outlook for oil demand appears to be healthy too, judging by this week’s key US economic data which have been mostly positive, with the key ISM services sector PMI surging to its highest point in almost a year.

As such, I expect to see a decisive break above the $50 hurdle on WTI soon, which should provide further support to energy stocks and the Canadian dollar. The latter’s potential strength on oil recovery should become clearer  against another commodity currency, especially the New Zealand dollar – where the central bank has turned more dovish once again – rather than the US dollar as the ISM beat points to a December rate hike from the Federal Reserve.

In fact, the NZD/CAD has created what looks like a false breakout above the long-term Head & Shoulders neckline at 0.9655. The false breakout has been confirmed by the negatively diverging RSI and the break of some short-term support levels including 0.9570 and now 0.9490. When such patterns fail to work, you tend to see the onset of a massive reversal as everyone who was previously (in this case) bullish rush for the exits. Consequently, we expect to see further weakness in the NZD/CAD pair going forward. Some of our bearish targets include 0.9400, 0.9280 and 0.9085 – levels that were formerly support. At this stage, a potential rally back above 0.9570 or especially 0.9655 would invalidate our bearish view. 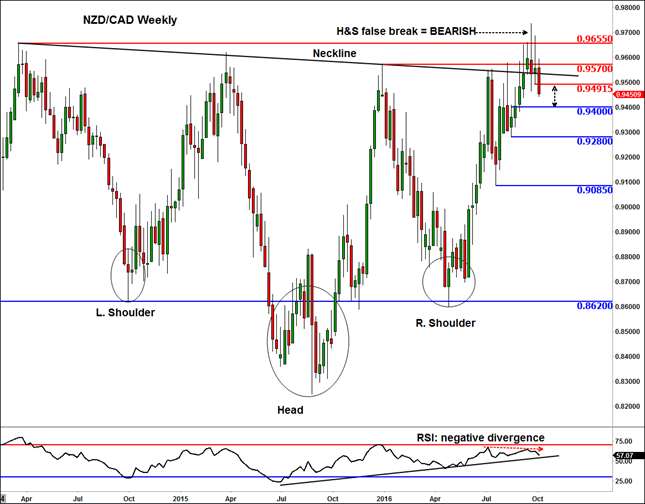