Friday’s forecast-beating US CPI inflation was the last significant data ahead of the Federal Reserve meeting. Other economic pointers from last week were mostly weaker than expected. The mixed-bag data therefore ensures that the “will they or won’t they” uncertainty continues for a few more days at the very least. But it is not a binary outcome, however. If the Fed puts the rate hike on hold, this does not necessarily mean the dollar will fall off a cliff this week. After all, central banks elsewhere are even more dovish than the Fed. What’s more, with the probability of the Fed tightening in September having fallen sharply in recent times, the market is probably no longer positioned for a rate rise anyway. Thus, in the event that the Fed remains on hold, the dollar could suck the sellers in with a short-term sell-off before squeezing them with an ever sharper rally. Obviously, the key risk here is that the Fed delivers a surprise rate increase or at the very least hints strongly at the prospects of a rate rise before the end of the year. In these potential scenarios, the dollar would almost certainly stage a vicious rally, potentially causing the EUR/USD to tumble.

At the moment though the trend on the EUR/USD is very vague. On the one hand, you have the 50 and 200 day moving averages both pointing higher which objectively tell us that on average price has been rising over the past 50 to 200 days at least. But on the other hand, the moving averages are lagging indicators and they don’t tell us anything about the now moment or the future (no indicator does). Indeed, the bears would argue that price action has been bearish recently: a bullish trend line has already been taken out in July and the underside of it has since turned into resistance.

Overall, it is safe to say that the Fibre is basically stuck in consolidation, although the most recent price action has been somewhat bearish. As such, we are leaning more towards the bearish argument than bullish in the EUR/USD exchange rate and thus expect to see lower prices in the days to come. Obviously a big caveat here is that if the Fed is surprisingly dovish on Wednesday then we will have to put our technical views to one side. In any case, price action, especially on Wednesday, should provide us a big clue in terms where the EUR/USD is headed over the coming weeks.

As far as today’s session is concerned, the EUR/USD has once again bounced off the 1.1150 area, roughly where the 50 and 200 day moving averages converge. So far, it hasn’t been a meaningful bounce, which suggests that there may be strong downward pressure on the EUR/USD. The next level below here is at 1.1125, the low from the last day of last month. Further lower is the 61.8% Fibonacci retracement level against the July low, at 1.1085, followed by the next support and 78.6% Fibonacci level around the 1.1010-1025 area. In terms of resistance, the key level to watch is around the 1.1200-1.1220 area (shaded in red). As can be seen, this area was previously support and so it could turn into resistance upon a potential re-test. Should we get above here then 1.1250 could be an interesting level to watch, for not only does this correspond with Friday’s high but also a short-term bearish trend line. 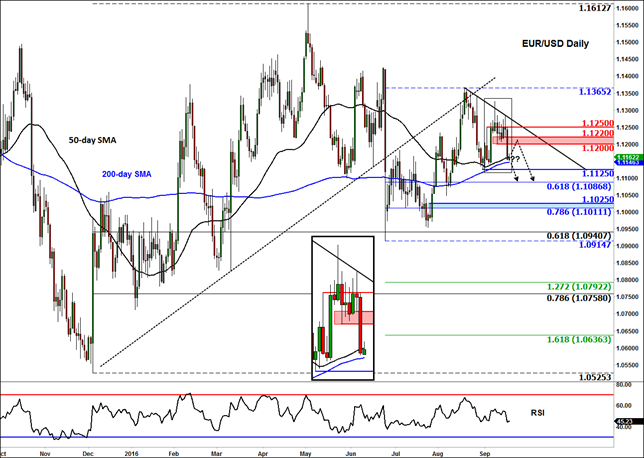