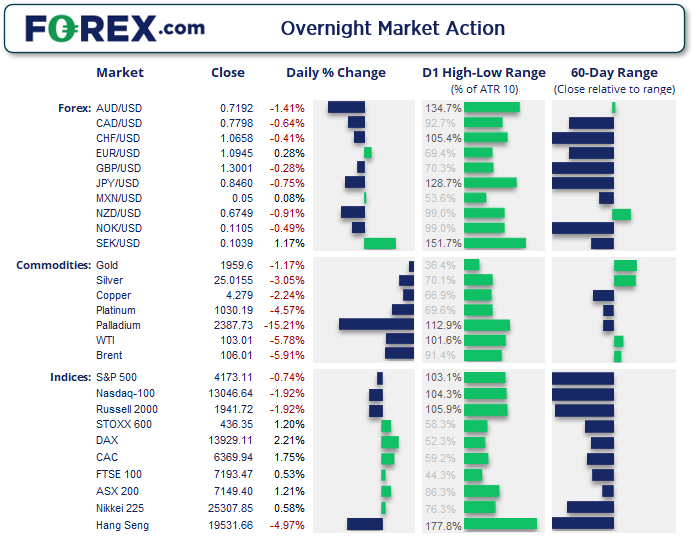 A fourth round of peace talks between Ukraine and Russian officials were held via video link overnight. Whilst they’re yet to produce any solid results, they are deemed as step in the right direction and hope remains a resolution can be found. And those hope have removed a key pillar of support for commodity prices which surged last week on supply disruption.

The US piled the pressure on China during ‘intense’ meeting in Rome to not provide military aid to Russia, with the White House warning of ‘significant consequences’ if they do. Yet despite these positive developments, Wall Street traded lower as investors were allowed to refocus their negative energy on the prospects of multiple Fed hikes.

Gold fell to a 6-day low and is now down around -5.8% from last week’s high. Yet in context of its 16.4% rally from the January low, it could still be part of a healthy pullback. And trader positioning last week showed that large speculators and managed funds remain long the metal, and we doubt they’ve all gone scrambling for cover because of a small retracement.

Sometimes, a little can go a long way and that appeared to be the case with the stronger euro overnight. Rising across the board, euro printed bullish outside days against all majors. The US dollar was the second strongest major and traded higher against all majors except the euro, as traders refocussed on the prospects of multiple rate hikes.

AUD and NZD were dragged down with commodities and the stronger US dollar. NZD/USD fell to a 2-week low in line with yesterday’s bearish bias, and our target remains either 0.67 or trend support from the January low (whichever comes first). USD/JPY closed above 118 for the first time since January 2017 and is less than a day’s trade away from hitting a 6-year high.

If commodities continue to weigh on the Aussie and traders remain bid the dollar, a break of trend support seems inevitable. Bearish momentum is also on its side having formed a lower high and strong impulsive move lower. Still, there chance of a ounce back above 72c but, as long as prices remains beneath the 0.7240 support zone, our bias remains bearish and for a run towards 0.7100. Whereas a break above 0.7245 invalidates our bearish bias and assumes the trendline remains valid.