The RBNZ hiked rates by 50bps and even discussed the possibility of hiking 75bps.  However, there are a few banks recently that have reduced the pace of interest rate hikes or even stopped hiking all together. The RBA hiked rates by 25bps to 2.60% on Tuesday when it was expected to hike 50bps.  Although the RBA indicated that interest rates are still on the rise, the pace of future interest rate increases will be determined by the incoming data and that it was not on a preset course.

The National Bank of Poland was the latest central bank to “pivot” from its monetary policy stance by leaving interest rates unchanged at 6.75% vs an expectation of a 25bps hike, which would have brought the key rate to 7.00%.  The primary reason the central bank left rates unchanged was due to slowing growth.  However, it also stated that the economic outlook is too uncertain due to the impact of the war in Ukraine to give any guidance on future rate moves.  Note that Poland’s CPI was 17.2% YoY in September, the highest in 26 years.

The Bank of Japan is off in a world of its own when it comes to monetary easing policy.

Even the UN chimed in recently with its 2 cents, noting that the world is on the edge of a recession that could bring even more damage to the global economy than the Great Financial Crisis in 2008 and the coronavirus in 2020.  “Interest rate hikes by advanced economies are hitting the most vulnerable hardest.  Some 90 developing countries have seen their currencies weaken against the dollar this year.”  East and Southeast Asia was pointed out as the area of the world that could be hit hard by a recession.

So, which will be the next central bank to pivot and reduce the pace of interest rate hikes.  Some are speculating that it could be the Bank of Canada when it meets on October 26th. At its September meeting, the BOC  hiked rates by 75bps to 3.25%.  However, jobs numbers have slowed during the summer months and inflation has pulled back from 8.1% in June to 7% in August.  Expectations are for September’s CPI to be 6.8% (released October 19th).  The committee did note that it will still have to raise interest rates further due to high inflation forecasts.  Perhaps the BOC only raises 50bps?

USD/PLN is higher on the day, up nearly 1%. The reason for the gain in the pair today is due to the National Bank of Poland pivot and the rise in the US Dollar.  USD/PLN has been moving higher since Russia invaded Ukraine in late February.  The pair made an all-time new high at 4.602, then pulled back to 4.1500.  Since then, USD/PLN has been moving higher in an upward sloping channel, recently putting in a new all-time high at 5.0601.  Horizontal resistance is just above at yesterday’s high near 4.9272 and then the all-time high form September 28th at 5.0601.  Above there, the pair can move to the top channel line near 5.1041.  First support is at the bottom trendline of the channel near 4.6882, and then the 38.2% Fibonacci retracement level from the lows of February 10th to the highs of September 28th at 4.6280.  Just below there is the third level of support at the September 12th lows of 4.6049. 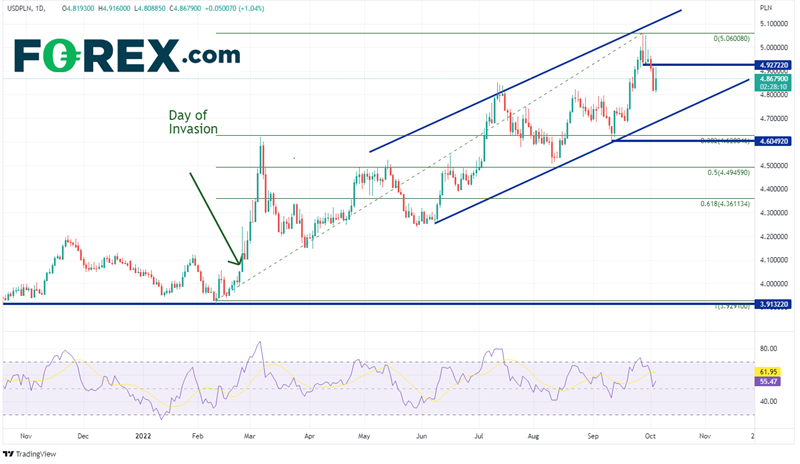