The market’s focus will be ping-ponging between major macroeconomic developments all around the world this week, and last night’s hotspot was clearly Australia, where the central bank met to discuss interest rates and monetary policy. As widely expected, the RBA left interest rates unchanged at 2.0%, leading to an kneejerk 25-pip spike in AUD/USD, but that move faded as the accompanying statement showed that the bank maintained (and perhaps even strengthened) it dovish tilt.

In a nod to the negative impact of 2016’s global market turmoil, the statement proclaimed, "Over the period ahead, new information should allow the Board to judge whether the recent improvement in labour market conditions is continuing and whether the recent financial turbulence portends weaker global and domestic demand. Continued low inflation may provide scope for easier policy, should that be appropriate to lend support to demand."

While the job market Down Under has been strong of late, RBA policymakers are no doubt aware that employment is a typically seen as a lagging indicator, meaning that the full brunt of falling commodity prices and slowing growth in China may not have hit Australia’s labor market yet. If commodity prices remain subdued or fall further in the coming months, the central bank will have no choice but to cut interest rates further this year.

After the brief pop to .7130, AUD/USD has fallen nearly 100 pips back to the mid-.7000s and currently sits at a critical technical crossroads. Last month’s inverted head-and-shoulders remains intact, barely, as long as the unit holds above both the trend line connecting the head to the right shoulder at .7040 and neckline support at .7050, but the odds may now be shifting in favor of a failed pattern.

To wit, the pair was unable to clear its 300-period (50-day) MA on the 4hr chart, suggesting that the medium-term trend still favors the bears. Meanwhile, the secondary indicators are also rolling over: the 4hr MACD has been trending lower since the start of the week, while the RSI indicator has already broken below its own bullish trend line. If support in the .7040-50 zone gives way, a quick drop to the psychologically-significant .7000 level is likely, potentially followed by a retest of the January lows under .6900 in time. Only a conclusive move above this week’s highs and the 50-day MA near .7150 would shift the bias back in favor of the bulls at this point. 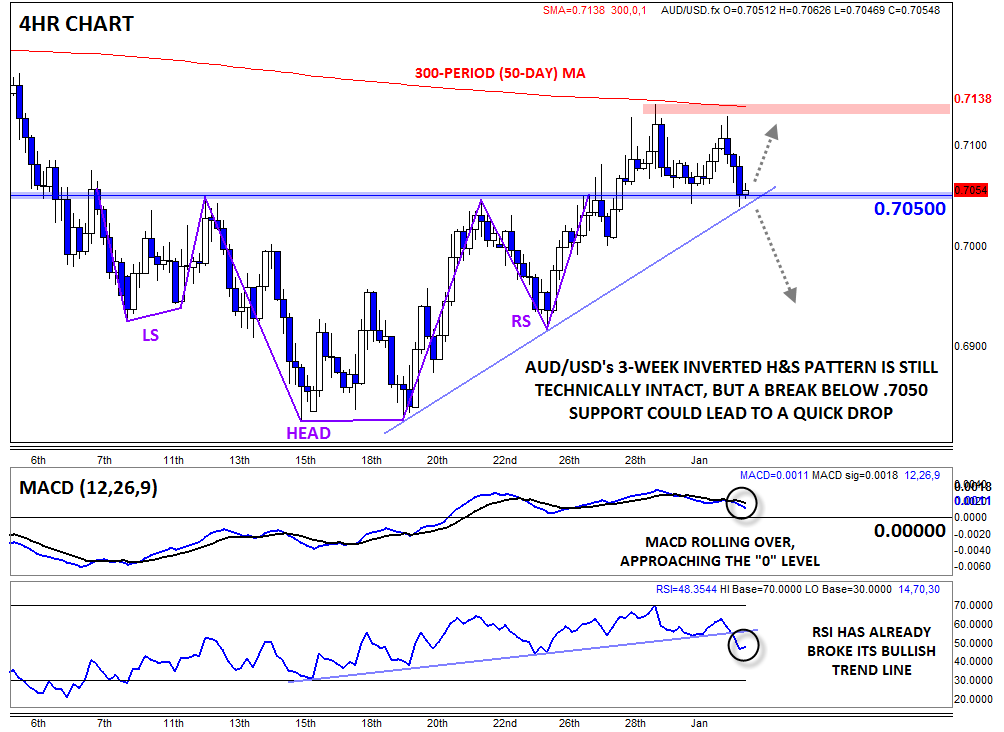