The EU releases its Flash CPI for March on Friday.  Expectations are for a print of 6.6% YoY vs 5.9% YoY in February. Many are expecting that the Russian/Ukraine war may be starting to spark inflation and therefore, push oil and other commodity prices higher.  Spain and Germany kicked things off today with harmonized prints that were much higher than expected.  Spain’s harmonized print was 9.8% YoY vs an expectation of 8.1% YoY and 7.6% YoY in February.  Germany’s harmonized CPI was 7.6% YoY vs 6.7% YoY expected and 5.5% YoY in February.  These are huge jumps in the YoY data from February.  Tomorrow, both France and Italy will report.  Expectations are for 4.8% YoY and 7.2% YoY, respectively.  Yesterday, the ECB’s Holzman said that he wants to raise the Deposit Rate by 50bps by the end of the year, as this would give the central bank increased optionality. (hawkish)  However, Christine Lagarde spoke earlier and said that although she expects factors that fuel inflation, such as food and energy, to remain high, she doesn’t expect them to “continue to move higher and higher”. (dovish)  Who will be correct?

Yesterday, EUR/USD began moving higher on the back of optimism that there may be a ceasefire in the Russia/Ukraine war due to positive peace talks between the 2 sides in Turkey.  The price action continued to move higher today on the back of the higher inflation data from the Eurozone countries.  EUR/USD is currently banging up against resistance at 1.1143, which it has attacked multiple times during March.  This level also confluences with the top, downward sloping trendline of the channel that the pair has been in since Mary 2021. 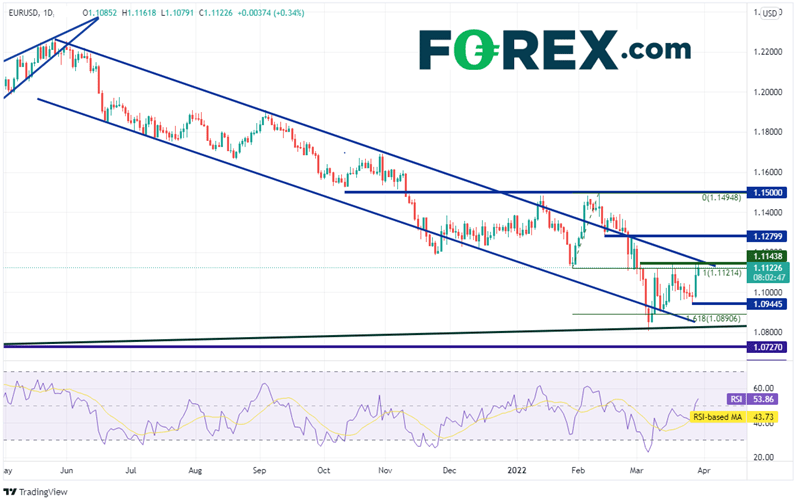 On a 240-minute timeframe, this level is also near the 50% retracement level from the highs of February 10th to the lows of March 7th at 1.1150.  In addition, at this same level is the bottom upward sloping trendline of an ascending wedge that EUR/USD broke below on March 21st.  If price can break above, the next resistance zone is a confluence of the 61.8% Fibonacci retracement level from the timeframe mentioned prior, as well as the top trendline from the ascending wedge, near 1.1232.  Horizontal resistance sits just above at 1.1280.  If 1.1150 does hold, support below is at the lows of March 28th near 1.0947.  Below there, EUR/USD can fall aggressively to a confluence of support at the bottom trendline of the long-term channel and the lows from March 7th at 1.0806.  The next support on the daily timeframe is 1.0727, which is the low from April 2020 (see daily). 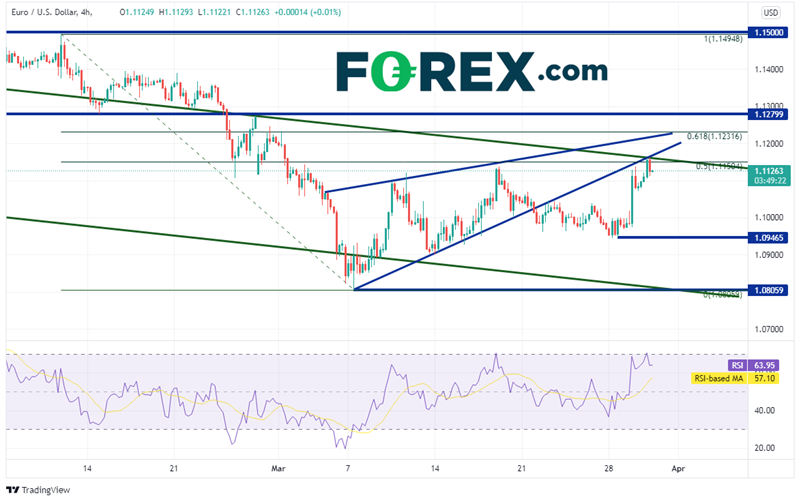 Spain and Germany released March CPI prints that were much stronger than expected.  France and Italy release their numbers tomorrow, along with the Eurozone Flash CPI on Friday. The risk to EUR/USD is that the remaining inflation data comes in weaker than expected. However, if the data continues to come in strong this week, Christine Lagarde may be forced to change her tune regarding he inflation expectations.