Fed Chairman Powell’s speech at the Jackson Hole Symposium last week was hawkish.  His speech seemed to reinforce what many in the markets had been discussing, that the economy will likely require restrictive policy for some time.  In addition, he noted that the longer the current bout of high inflation continues, the greater the chance that expectations of higher inflation will become entrenched. He also said that reducing inflation is likely to require a sustained period of below-trend growth.  Most of his comments appear to be hawkish, while hinting at the possibility of a recession.

Comments from the Fed’s Williams, as well as stronger US economic data, are helping push the “higher for longer” narrative.  Williams said that the Fed is data dependent regarding how high rates have to go, however, his baseline is to get rates above 3.5%.  Today’s CB Consumer Confidence reading for August was 103.2 vs 97.7 expected and 95.3 last.  In addition, the JOLTs Job Openings for July was 11.239 million vs an expectation of only 10.45 million and a previous reading of 11.04 million. The positive data will help the Fed’s confidence if it decides to hike rates by 75bps at its September meeting.

As a result of the possibility of higher interest rates, Gold (XAU/USD) has been moving lower.  After Powell gave his speech on Friday, the price of Gold moved from a high of 1802.52 down to current levels, near 1720.38.  Will the price of Gold continue to move lower?  On a daily timeframe, the 1670 level has acted as important support for the precious metal, bouncing off the level roughly 6 times since April 2020.  While it has been above there, Gold traded to a high near 2075 twice, setting up a possible double top formation with the neckline near 1670, which is also the 50% retracement from the lows of April 2019 to the highs of August 3rd, 2020.  If price finally breaks below the all-important level, the double top pattern will be complete and it will target near 1285, near the lows of April 2019. 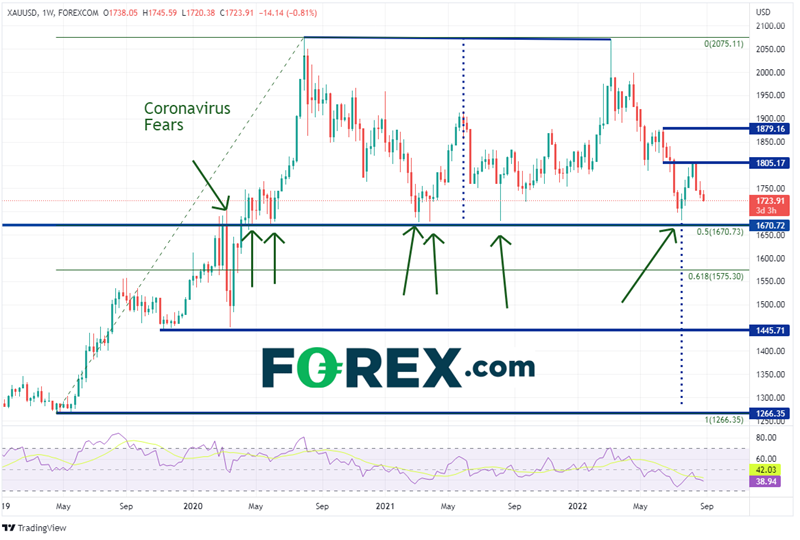 On a daily timeframe, price has been moving lower since reaching the second peak of the double top on March 8th, in an orderly descending channel.  Price tested the 1670 level and the bottom of the channel on July 21st, then bounced.  However, Gold could only reach the top of the channel and horizontal resistance near 1807 before moving lower again.  If price is to continue to move lower, the first support is now the 1680.95, which is the lows from July 21st.  Below there, price can move to the 1670 level and then the bottom trendline of the channel near 1610. However, if the 1670 level holds once again, the first resistance is at the top trendline of the channel near 1775.  Above there, Gold can move to the highs of August 10th at 1807.91, then the 38.2% Fibonacci retracement from the highs of March 8th to the lows of July 21st, near 1829.74.  Just above there is the 200 Day Moving Average at 1837.28. 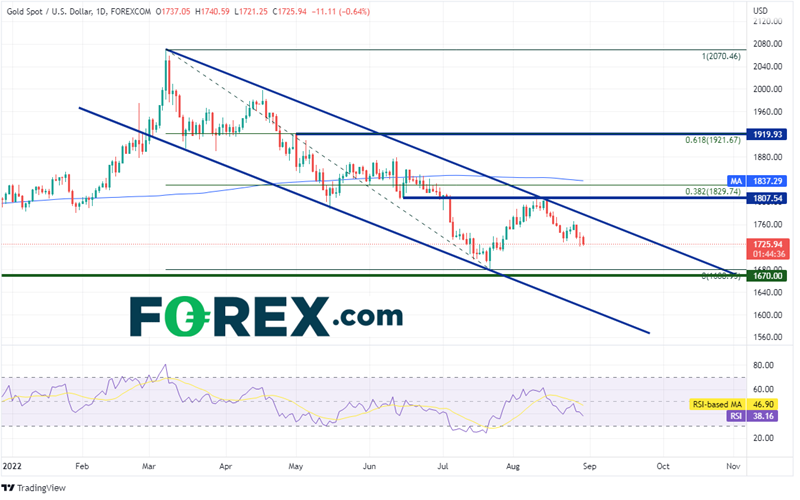 Fed Chairman Powell and other Fed members have been touting aggressive rate hikes at the September meeting.  If the Fed does hike rates and is hawkish at its next meeting, will Gold finally break through 1670, which it has tested numerous times?  We may have to wait and see.  But if it does, the double top target is all the way down near 1285!