Russia goes ‘all in’ with invasion of Ukraine

Asian equities and futures markets are all pointing lower after the grim fears of a Russian invasion turned into reality. It's been like a slow car crash up until this point, but now we have very much switched back into real-time. US futures fell around -2% with the S&P 500 E-mini contract touching its lowest level since May 2021. It has since pulled back above the June 2021 low. DAX futures are currently -4% lower ahead of the European open.

There was certainly a calm before the storm earlier in the Asian session. Russian troops were reported to be ready for combat, with the US claiming an invasion was imminent. And after an excruciating wait of a few hours, reports of the first explosions in Ukraine came in, which are now getting closer to the city of Kyiv. Pleas from Western leaders have clearly been ignored, and Ukraine is under siege – with Russia claiming their military operations are justified under article 51 of the UN charter, citing “self-defence”. 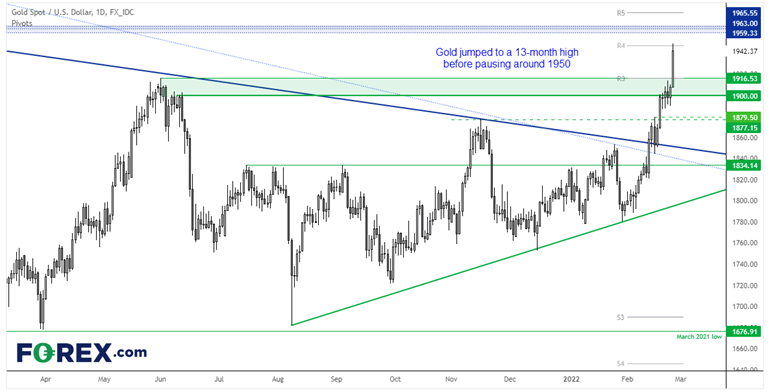 Gold rallied over 2% to a 13-month high as money flowed into safe-haven markets. Under such circumstances, technical analysis can be less reliable as money is flows with undesirable emotions, although gold appears to have hit an interim high around 1950. Also note that today’s high is the monthly R4 pivot, which is a level rarely tested. There are also several resistance levels around 1960 which we suspect will hold, should prices continue from here. Silver also rallied to $25 and hit its highest level since November. And palladium – a key export for Russia, traded briefly above $2500.

The rouble tumbled against the US dollar which has seen the currency pair fall over -10% today alone, which is its most volatile day since December 2014.

A pattern we had noted in recent days was how the Swiss franc outperformed the yen on risk-off headlines. Well, that is not the case today, as the Japanese yen is clearly the dominant force and up against all of its major peers. 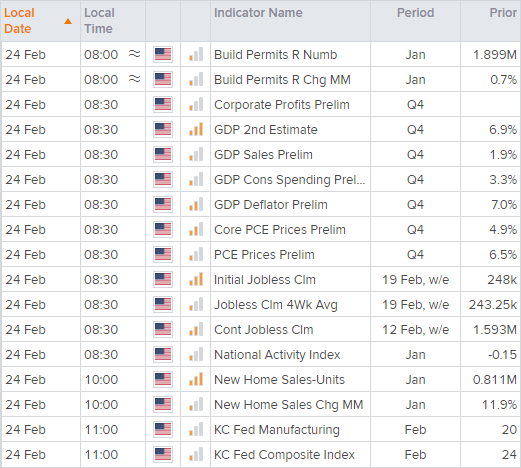