The new week has started with a bang for risk-sensitive assets, including stocks and metals. At the time of writing, silver had risen around 5% so far on the day, and was leading other metals higher. Gold was also up, but not as impressively as silver, with the yellow metal looking to build a base above the $1725 short-term pivotal level. Similarly, the EUR/USD and GBP/USD were up around 1% on the day thanks to weakness for US dollar. The greenback and bond yields retreated a day ahead of US CPI publication, with some investors speculating that inflation may have peaked.

Whether the metals can kick on from here or go in reverse depends almost entirely on the direction of US dollar. It will face a big test on Tuesday with the release of US CPI data which is surely going to be the main focal point for the week. Headline CPI is expected to have cooled to 8.1% on an annual basis from 8.5% in the previous month. Core CPI, which excludes food and energy, is seen accelerating to 6.1% from 5.9% last.

Regardless of the CPI prints, the Fed is almost certain to deliver another jumbo-sized, 75-basis-point, rate hike next week. This outcome seems to be priced in by now, which is why the dollar is on a retreat after making solid gains in recent months. On Friday, Fed Governor Christopher Waller said he favours “another significant” increase in interest rates at the September meeting, something echoed by James Bullard.

Gold has been able to defend that $1700 support level on a number of occasions in recent days, suggesting that dip-buyers are trying to take advantage of downbeat prices. The main focal point will be on Tuesday’s publication of US inflation data for August. Gold investors are hopeful that inflation has peaked. If we see a weaker-than-expected print on CPI, then this would further support the “peak inflation” narrative and consequently I would expect the metal to rise a bit more meaningfully on the back of that. Otherwise, it will be the same old story all over again. 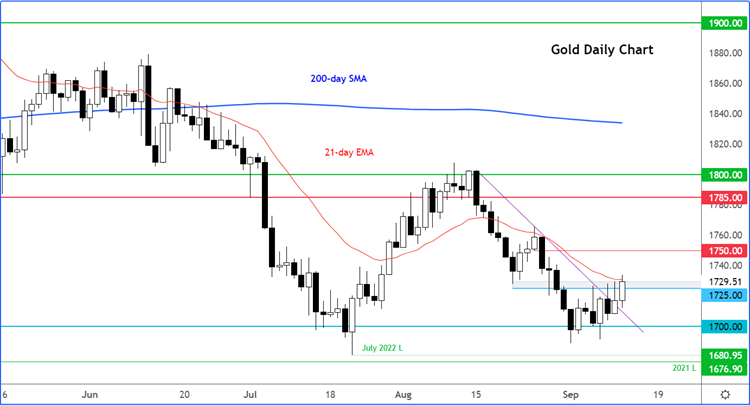 Compared to gold, silver has managed to rise very strongly on the session, up more than 5% so far. The grey metal has found additional support from ongoing risk-on rally, with the global indices being up sharply over the past two and a half sessions. 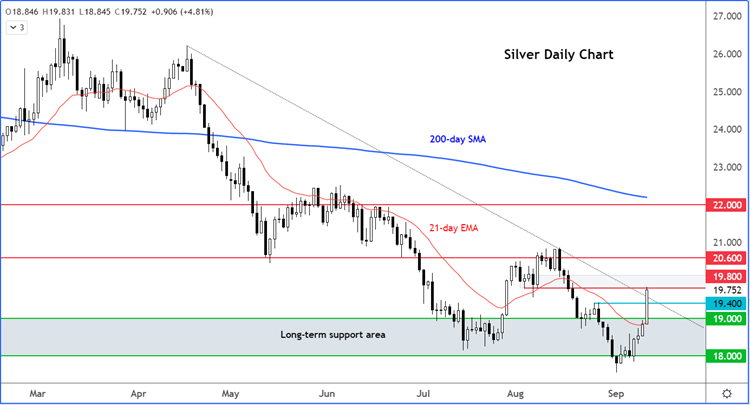