Equity markets have surged higher in recent days, with investors more or less ignoring the slowing down of economic growth in China as well other global macro risks. China’s factory activity has weakened to its lowest level since November 2011, according to the closely-followed manufacturing PMI. Now, Moody's has revised its outlook on the world’s second largest economy to negative from stable. In Europe, economic growth has been virtually non-existent and the latest PMI readings on the UK economy have been weaker, too. There is also the potential for Britain to exit the EU which together with the on-going refugee crisis has raised a lot of question marks over the whole European Union project. In the US, the political situation is uncertain with the elections looming large later in the year. US corporates have also been stuck in an "earnings recession," with the S&P 500 company earnings declining for the third consecutive quarters.

Yet, stocks have rallied despite all the doom and gloom out there. Admittedly, US data has turned somewhat positive in recent times and should we see further improvement in the world’s largest economy then this would bode well for global equities. There will be plenty of top-tier macro data to look forward to this week, including key services sector PMI and the monthly jobs report. Today, the focus will be on the ADP private sector non-farm payrolls report, which can be a good leading indicator for the official jobs report on Friday. It will be released at 13:15 GMT (08:15 ET) and analyst expectations are that around 185 thousand jobs were created last month.

Also supporting stocks has been the corresponding rally in crude prices of late. It remains to be seen whether oil will be able to hold on to its gains when the official supply data is released from the US Department of Energy at 15:30 GMT (10:30 ET) later today. Last night, the American Petroleum Institute actually poured cold water on hopes we will begin to see some sharp drawdowns in US oil inventories amid the on-going idling of rigs. It reported a big build of 9.9 million barrels in stockpiles. If confirmed by the official numbers then oil may come under renewed pressure. Conversely if it is a considerably small build or better still a drawdown, then oil (and therefore equities) could rally. The DoE will also publish data on crude oil production, which has been falling for five straight weeks. Will this trend continue for the sixth week?

One other focus for stock markets is the possibility the European Central Bank would further expand its monetary stimulus programme at its much-anticipated policy meeting next Thursday. The bank of Japan has already cut rates to the negative while the People’s Bank of China this week lowered banks' reserve requirement ratios in a bid to stimulate lending. In the US, the Federal Reserve has obviously raised interest rates by a tiny amount, a decision which worried many investors and analysts that it would choke off growth, cause a recession and hurt corporate earnings further due to the expected appreciation of the US dollar. But if the incoming data help to reduce these fears then some would argue that the Fed turning hawkish breeds confidence about the world’s largest economy. While it may cause the dollar to appreciate further, global stocks, including the US markets, may actually be able to further extend their gains. Meanwhile some of the other large central banks including the BoJ and ECB remain pretty much dovish and with rates being universally low, higher-yielding stocks could indeed rise further.

With the indices powering through some key resistances in recent days, the momentum indicators are all showing "overbought" conditions on small time frames. This morning’s hesitation for European markets to push further higher may well be a healthy outcome as overbought momentum conditions unwind. Given the recent bullish price action, the bears would require the indices to form daily reversal patterns. Until such a time we see some bearish-looking completed candles on the daily charts, the short-term trend would therefore remain bullish. In any event, the direction of oil prices may well have a big impact on the stock markets later today.

The major US indices are all showing similar technical picture. Below we have a daily chart of the Nasdaq 100. As can be seen, it has broken several key resistances after forming a false break reversal pattern below the 2015 low of 3905. Yesterday, it created a large bullish engulfing candle which further confirms the reversal. As things stand, it looks like the Nasdaq may be heading towards these levels:

The index may turn lower from any of the above levels, in part because of withdrawal of bids or profit-taking. A break above 4450/50 area would point to a continuation to higher levels. As mentioned, the sellers would first and foremost like to see a daily reversal candle, ideally around one of the above resistance levels. Traders should note that the 50 and 200 moving averages are pointing lower, so the bulls are not out of the woods just yet. 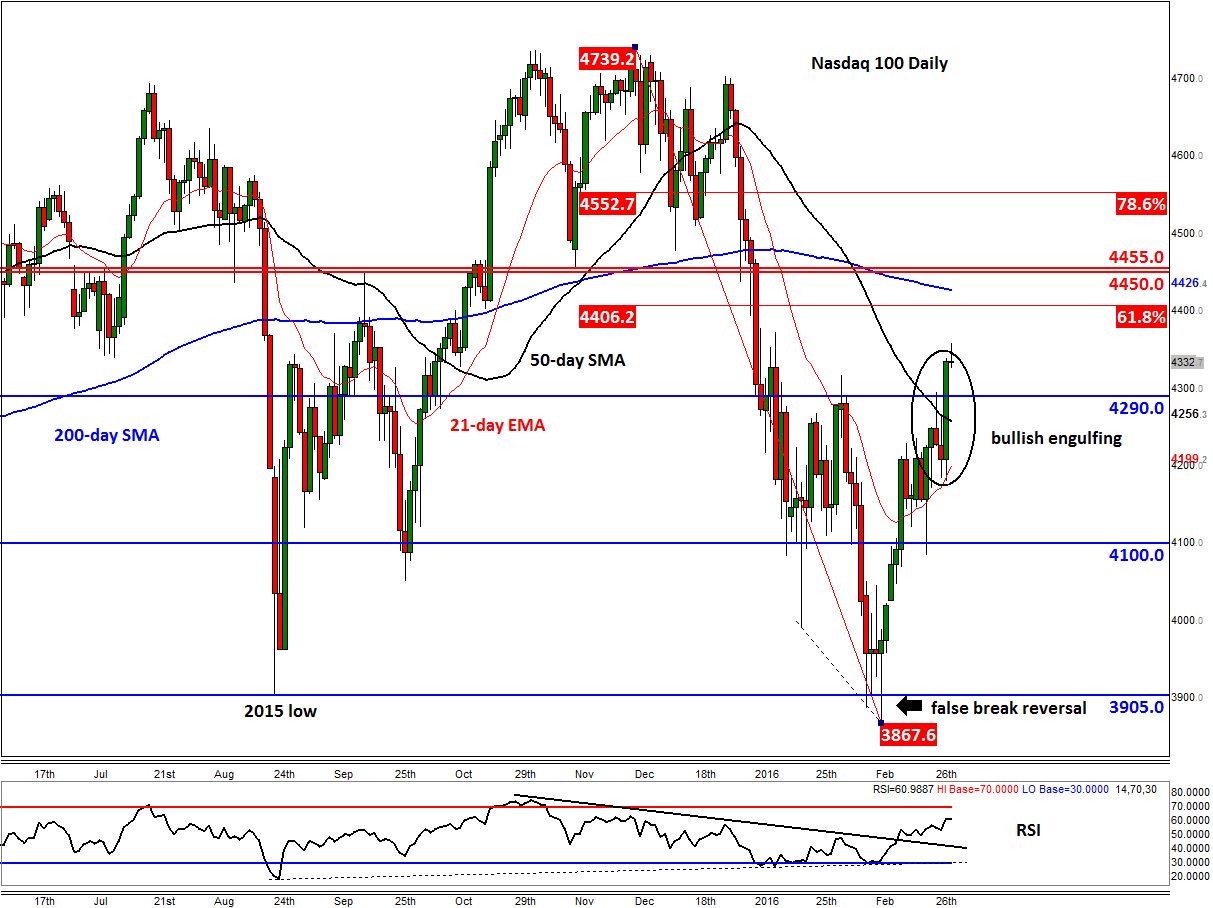